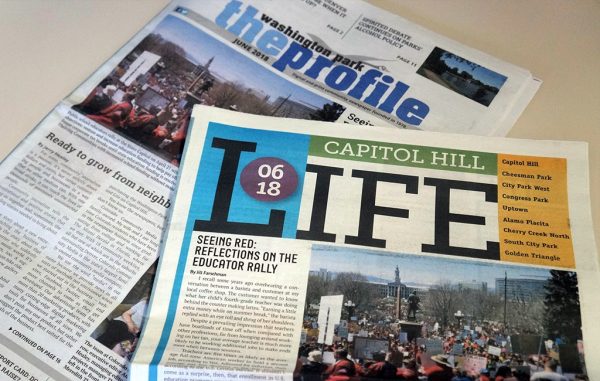 An Englewood-based media company has purchased two free monthly neighborhood newspapers in Denver that have been around for four decades.

Colorado Community Media introduced itself as the new owner of the Washington Park Profile and Life on Capitol Hill in both publications’ June editions.

CCM purchased the titles from Denver Metro Media, led by Jill and Jay Farschman. Terms of the deal were not disclosed.

CCM already owns 18 weekly print publications in the Denver metro area, including the Westminster Window, Golden Transcript, Littleton Independent and Douglas County News Press. Some of the papers are delivered for free to residents; others have a paid subscriber base.

The company is owned by husband-and-wife team Jerry and Ann Macari Healey. Jerry Healey said he purchased the publications over the last six years, after having temporarily owned several of them in the 1990s.

In a column published in both newspapers this month, Healey wrote: “You can expect some changes – for one, we will be stapling and trimming the newspaper to give it more of a newsmagazine feel. But we will also keep the long-standing traditional focus on neighborhoods and community.”

In an interview, Healey said he thinks CCM’s “resources and our editing will improve the quality of the content.” The company has 36 full-time employees.

The Farschmans purchased the Washington Park Profile in early 2015 from Paul Kashmann, now a member of Denver City Council.

“We’ve always had coffee and periodic conversations to bounce ideas off one another,” Farschman said.

“It kind of filled a part of their map, a hole they had in central Denver,” she said, adding that CCM “has the economics of scale to be able to do more than I was able to do.”

The two newspapers once shared an office near East Jewell Avenue and South Pearl Street, but Farschman said employees more recently had been working remotely.

The June issues of the two newspapers both feature a reflection by Farschman on public school teachers’ late April rally at the Colorado statehouse, a story on possible changes to Denver Parks & Recreation’s alcohol policy, and briefs regarding local restaurants.

The Washington Park publication – which has 28 pages, a dozen more than its Cap Hill counterpart – also profiles a teen percussionist and covers the history of Overland Park.

In December the North Denver Tribune, another community newspaper, closed after 80 years, when its publisher said it was unable to cover expenses.

Farschman said the two acquired publications have been profitable, and that she increased the circulation of the Profile by 2,000. She said one of her successes was reinstating home deliveries of the Profile, which the previous owner had discontinued. 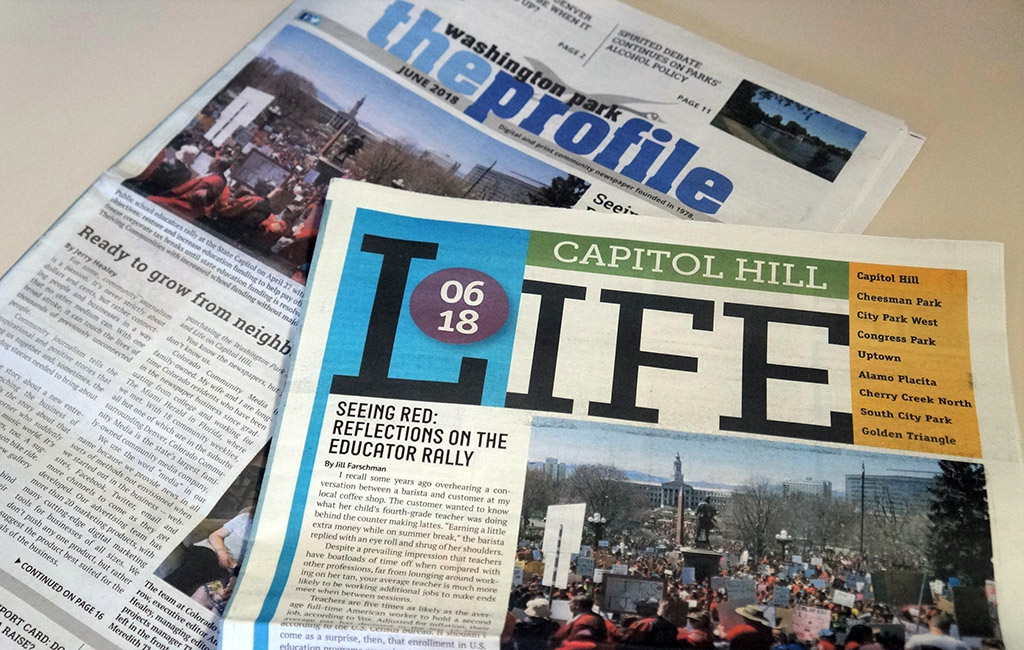 Two publications that spawned in the '70s have been snatched up by a media company with several similar holdings in the area.

I’m unable to let this column go without a comment. I wrote for Life on Capitol Hill for 14+ years and I’ve been appalled by the changes Jill Farschman made during her brief tenure as LIFE’s publisher and the new ownership has gutted the paper. Journalistic integrity? I don’t think so. Journalism at all? Doubtful in the future.