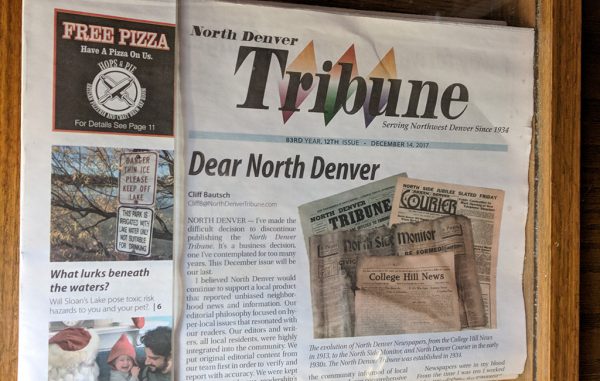 The North Denver Tribune announced in its December issue that it is shutting down. (Kailyn Lamb)

A Denver neighborhood newspaper has shut down after 80 years.

Cliff Bautsch, publisher of North Denver Tribune, wrote an editorial for the front page of the December issue announcing it would be the paper’s last. The Tribune was first published in 1934.

Bautsch said the paper had been taking strides to improve online content, but it wasn’t enough to cover expenses.

“It’s a business decision, one I’ve contemplated for too many years,” he wrote.

“While we made important progress with our website and changes in distribution and printing, in the end that progress hasn’t been sufficient to support the tremendous effort and expense needed to produce a quality product delivered through the mail to 14,000 homes.”

Bautsch and other Tribune staff members did not respond to requests for comment.

In his editorial, Bautsch said he had been working with the Tribune since the age of 10, when he helped his father, who printed it. He bought the newspaper 40 years ago.

Editor Basha Cohen and writer Elisa Cohen both wrote brief pieces on their time at the Tribune. Basha worked for the paper for 12 years and Elisa spent two decades there.

“Just as I was on my way up in the world of print journalism, the internet unfunded our model,” Elisa wrote. “Craigslist took away ad revenue. Facebook put the role of the editor into everyone’s hands.”

According to the Tribune’s 2017 media kit, the monthly paper had 11,000 direct mail subscribers.

There are still a few neighborhood publications in the Mile High City. Denver Metro Media publishes both Life on Capitol Hill and the Washington Park Profile. Jeff S. Fard is the editor and publisher of 5 Points News. Greater Park Hill News has been running since 1961.

The North Denver Tribune announced in its December issue that it is shutting down. (Kailyn Lamb)

Publisher Cliff Bautsch said the paper had been taking strides to improve online content, but it wasn’t enough to cover expenses.