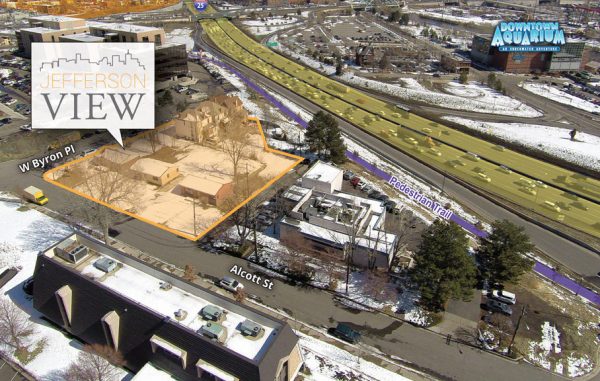 Jefferson Park is rising to a 12-story peak.

Apartment developer Argyle Residential bought a 0.8-acre site at West Byron Place and Alcott Street last week for $5.7 million. Preliminary filings with the city show plans to build a 12-story tower overlooking Interstate 25, which would be among the tallest structures in the neighborhood.

“It’s going to be the first significant (tower) that will get built” in Jefferson Park, O’Dell said.

Preliminary site plans call for 248 apartments. About a quarter of the units would be two-bedroom apartments and the remainder would be one-bedrooms. Houston-based Meeks + Partners is the architect listed on the plans.

Jefferson View LLC, the buyer, received a $41 million loan from The Northwestern Mutual Life Insurance Co. secured by the four parcels included in the sale, according to city records.

In the neighborhood, Argyle’s tower is rivaled by a 15-story apartment complex proposed for the former La Loma Mexican Restaurant site. Turntable Studios alongside Mile High Stadium is 13 stories high. And on the east side of Jefferson Park, the RiverClay condo building stands six stories tall.

More recently, Argyle purchased a half-acre property on bail bond row in Golden Triangle. For that site, the apartment builder has filed plans with the city for a 14-story, 176-unit building with retail and restaurant space on its ground floor. 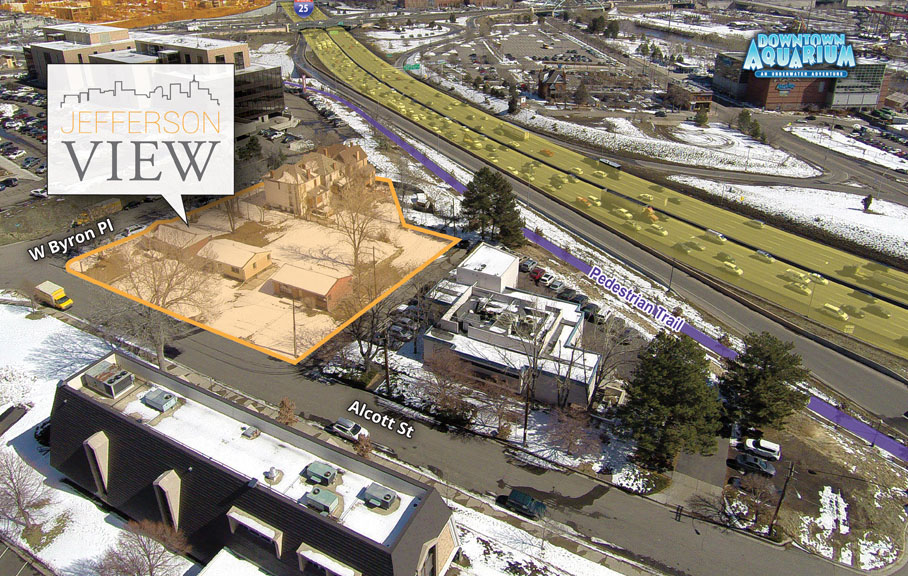 Argyle Residential bought a 0.8-acre site at West Byron Place and Alcott Street last week for $5.7 million, with plans to build one of the neighborhood's tallest structures.

It’s really sad that a quaint, family neighborhood is being ravaged for 12 and 15 story highrises. This is not the middle of the city; buildings that tall will completely block all skyline views (and frankly, the sun) for the JeffPark area. Denver is quickly selling its soul and becoming every other metropolis with shiny new buildings and zero character.

And I’m sure you’ve never complained about rising housing prices. Yes, high rises change neighborhood character, but they are necessary, and new residents will add to the vibrancy of Jefferson Park. This property currently holds 6 single family houses that look close to condemnable. If there wasn’t a mile of highway, parking lots and an amusement park in the way this area would absolutely be part of “the middle of the city.”

Serious! Most of us Colorado people DO NOT want to be California, Santiago or New York The traffic is already out of control!
I would love to build a high rise right on the investors property… I am so ashamed of putting some of these commissioners and city counsel men in office!! They do not care about Colorado or any of us residential people all they care about is money in their pockets. STOP BUILDING these ugly structures who move in for a year and move out… We all need to get on board and shut these people DOWN!!
In Jefferson County they want to build a homeless shelter by the Fed Center… So now Lakewood gets more rift raft…

As a homeowner that has lived and worked in this neighborhood for many years I’m so excited for more density to come to this neighborhood! Jefferson Park may have been a quaint family neighborhood a long time ago, but it hasn’t been that for a long time. Because of this and other developments this neighborhood is becoming a vibrant and walkable neighborhood again. There are great new bars, breweries, restaurants, and new businesses opening their doors here because of projects just like this. Let’s be very clear, this development and all the new amenities coming to the neighborhood are welcomed by the vast majority of residents. No one is entitled to city views, and to disparage a project that is going to bring needed housing and density to a neighborhood directly next to the Central Business District because of anger over disappearing views is short sighted at best. The developer and architect have yet to release renderings and the comment above is already criticizing the building, lol. I think I’m joined by many when I say NIMBY comments like this are becoming more and more comical and more and more difficult to take seriously.

Watch these comments get filled with complaints about a city growing in the main core of the city. Weird how that works.

Nimby comments aside, I am all for a growing city. I’m a 3+ year resident and fully acknowledge I’m part of that growth (or the problem, depending on your view). What I do think is short-sighted is putting up 15 (!) story buildings in what still amounts to a neighborhood, not to mention skipping any additional infrastructure to support them (roads, parking, etc.).

Additionally, I don’t believe there are currently any buildings over 4 stories in the entire Jeff Park area. Albeit in the name of progress, these massive buildings are, regardless of your support or condemnation of them, going to block out the sun for much of the neighboring area. While I agree that “no one is entitled to city views”, I’m fairly sure none of you would appreciate a 17 story building next to *your* single family home.

Being within walking distance of one of the nation’s premier transit centers, the density within 1 mile of Union Station should actually be much higher than what it currently is. The same can be said for every transit stop along FasTracks. A healthy city continually evolves, and thus becomes more dense. Get used to it, because a dense city is way more sustainable than suburban sprawl.

The North-side, as Highland and Jefferson Park was so affectionately known during the 60s, 70s, 80s, and 90s, was predominately hispanic. Before then it was home to many Itallian immigrants. Nobody really cared about these neighborhoods until they became gentrified, in the 2000s. Developers and realtors slapped on fancy acronyms thus changing the working-class nature of the neighborhood.

With that said, the active street life has blossomed into a sustainable, and pedestrian-oriented neighborhood. Most people in the neighborhood don’t have views of the skyline, beneath all those beautiful trees.

Density (high-rises, mid-rises) promotes pedestrian-oriented development. That means people will be more inclined to use mass transit, walk to the stores, walk to the restaurants, ride their bikes.

Apparently the investors also would like to build a mid-rise on their property. That’s why they have submitted plans to the city.

The city commissioners are focusing on the city of Denver. They don’t have any jurisdiction for the entire state of Colorado.

If the homeless are living in Lakewood, that means that they aren’t living in your back alley!!! Therefore, build that mid-rise!!!

I was thinking about the view myself but honestly am more concerned with the infill of more great restaurants, bars, shops, etc. It’s really what the area so desperately needs right now. So, it will be interesting to see the renderings and what the final plans will be. It’s sad to see the old homes go, but exciting to see the city grow and change.

Here is a rendering:

This neighborhood was rezoned way before you moved into the neighborhood. Existing residents at the time also had the opportunity to voice input during the rezoning process back in 2010. Anyone new to the neighborhood since that time should have done their due diligence if they were concerned about height restrictions. There are multiple 5 story buildings in the neighborhood and existing infrastructure is more than adequate for the forthcoming density (this proposed building is literally a couple blocks from freeway access, not really sure what infrastructure you’re referring to). The city does studies on this and can place requirements on each project. For example, new developments are the reason tree lawns and larger sidewalks are returning to the neighborhood. Like it or not, during the master city planning process, this neighborhood was targeted as one that it does make sense to grow up and increase density and it’s simply been a matter of time since the rezoning before this planned density was constructed. A 3 or 4 year resident literally only has themselves to blame for moving to the neighborhood if this is something that bothers them.

Chris, it’s also exciting that there are 3 rezonings- one that has passed, and 2 that have full neighborhood organization support and are likely to pass that will expand the commercial center near 25th and Eliot. I agree, more amenities and a walkable neighborhood are what is going to make this neighborhood great!