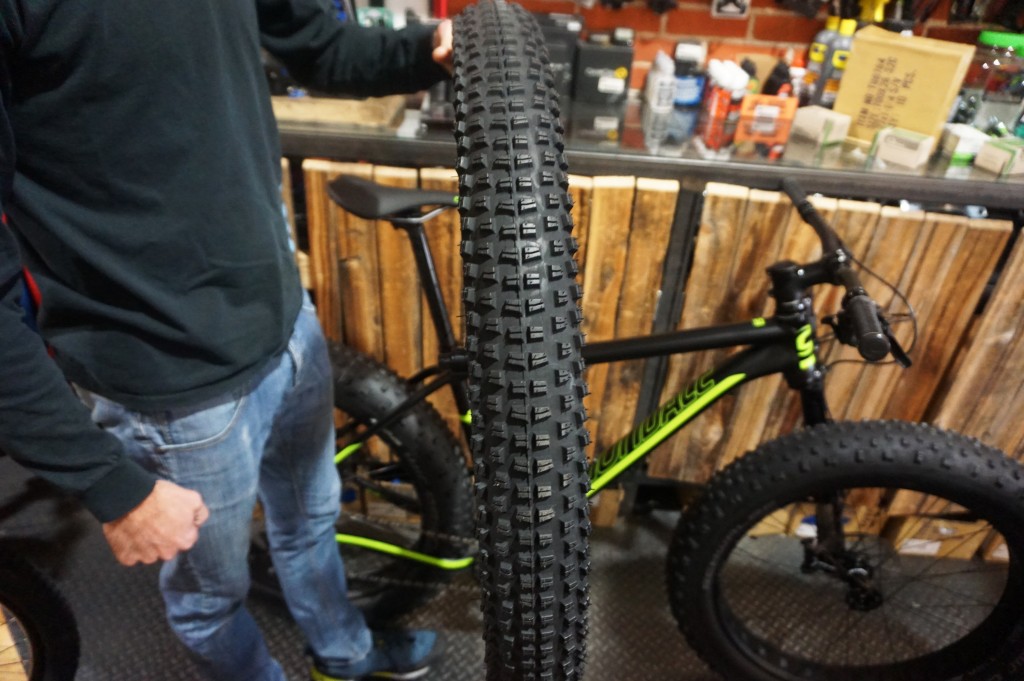 Wade Washburn of C3 shows off a recent plus-sized addition to his shop’s inventory. Photos by George Demopoulos.

Bike shops around Denver are stocking up on plus-sized mountain bikes that carry a wider tire than a standard bike – but not as beefy as the fat bikes cruising around the snow in ski towns.

The new tires are fit for the 27.5-inch wheels of dirt bikes, which fall in size between traditional 26-inch tires and the fat bike 29-inchers. The hybrid wheels first hit the bike scene in 2007 but have only begun to see widespread use over the last few years.

Wade Washburn, owner of the Colorado Cycling Connection (C3) chain of shops that opened its third outpost in Golden earlier this year, said the new tires will be all the buzz in 2016.

“Before now, it’s been all manufacturer prototypes,” Washburn said. “This year, you’ll see shops growing their inventory on 27.5-plus. If not, they’re going to miss out.” 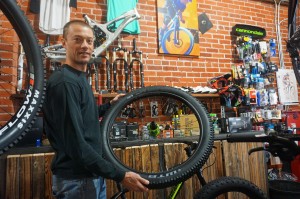 The increased width gives the tires better traction, Washburn said, because it gives them a larger contact point with the ground. The extra rubber makes a bike more comfortable and stable, Washburn said, adding that the tires can also make mountain biking easier for beginners.

But the bikes aren’t just for riding trails. They’re helpful for commuter bikers, as well, because of increased traction in adverse weather conditions, like an unexpected blizzard.

Few companies build frames that can fit plus-sized tires’ wider profile, so it can be difficult to get the right setup for the new wheels.

“You can’t have an older year of bike and cram in a 27.5 wheel,” Washburn said. “It’ll fit in some 29ers, but for full benefits, new equipment is necessary.”

Swiss manufacturer BMC, Canadian company Norco and California-based Haro Bikes all make 29er frames that can be fitted with 27.5-plus tires, Washburn said. 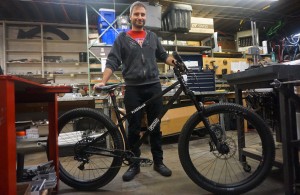 C3 began stocking plus-sized tires two months ago, Washburn said, after he saw the popularity of standard 27.5 tires skyrocket over the last year and a half. He offers a few different bike frames that can accept the tires: a rigid frame for $1,000, front suspension model for $1,500, and a soft tail for $2,500.

Denver bike manufacturers have been tapping into the plus-size craze, too. Jefferson Park-based bike builder Guerrilla Gravity, which won $30,000 earlier this year in Denver’s Office of Economic Development Biz Plan Competition, unveiled the Pedalhead, its own 27.5-plus bike, last month.

“People realized fat bikes weren’t really applicable to everything, so this (27.5-plus tire) tries to address it,” said Will Montague, co-founder of Guerrilla Gravity. “They fit some 29ers, and then any bike made specifically for them.”

Montague said he first noticed 27.5-plus tires ballooning in popularity earlier this year.

The Pedalhead comes in two permutations: one that fits fat tires that retails for $2,095 and another specifically for plus-sized tires at $2,145.

The Pedalhead is Guerrilla Gravity’s third bike since launching production in 2012. It’s available for preorders now and will ship in February. So far, the company has received 10 preorders, Montague said.

Wade Washburn of C3 shows off a recent plus-sized addition to his shop’s inventory. Photos by George Demopoulos.