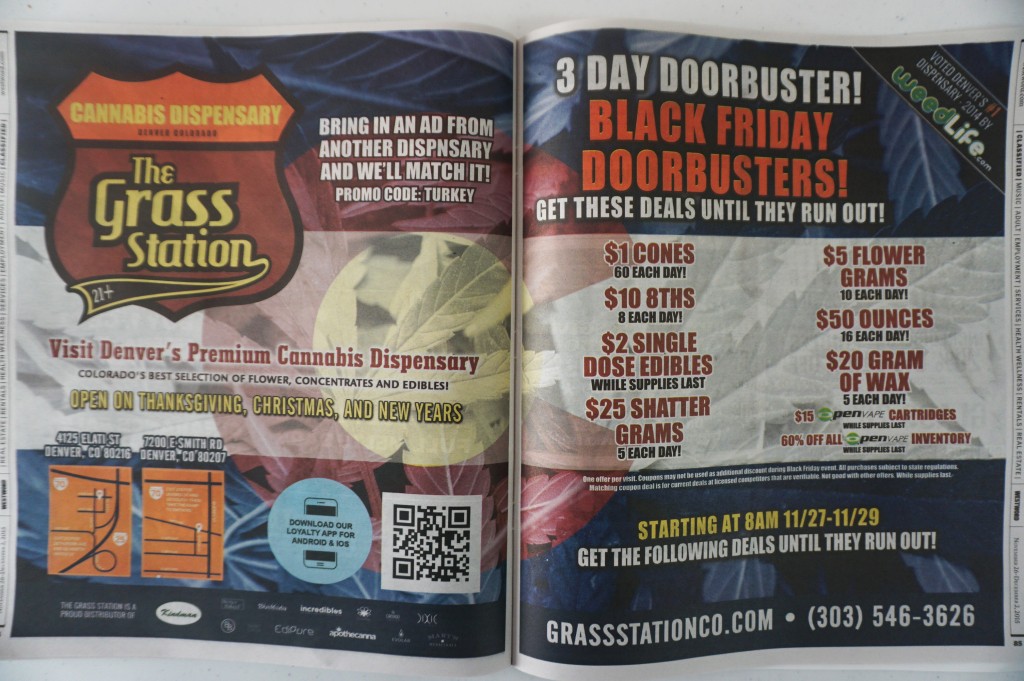 Grass Station took out two full-page ads in Westword ahead of Black Friday.

Not to be outdone by much larger national retailers, Denver’s cannabis merchants are rolling out Black Friday deals of their own.

“We’re trying to mimic what the big-box stores do on Black Friday,” said Ryan Fox, CEO of the Kindman brand of cannabis and founder of Denver’s Grass Station stores. “Last year we had a top-10 sales day at our LoHi location – it was 50 percent more than the store would see on an average Friday.”

Fox’s Grass Station, which opened a store in Stapleton earlier this year, is offering discounted cannabis from Friday through Sunday. An ounce of flower, which usually runs $360, is marked down to the door-busting price of $50. Grass Station only offers 16 of them per day. Other discounts include $25 grams of shatter, which usually run $60, and 60 percent off O.Pen Vape products.

Fox said Grass Station will remain open on Thanksgiving, as well as Black Friday, to capitalize on the first big tourist weekend of the winter.

Prior to the legalization of recreational cannabis in 2014, Fox said he always offered Black Friday discounts to his medical patients, but last year was the first time that any adult could legally buy cannabis.

They came out in droves.

“We started the day with a line 150 people long, some who had stayed there the whole night prior since closing,” Fox said. “It really opened my eyes to what we’re doing, more so than any other day in 2014.” 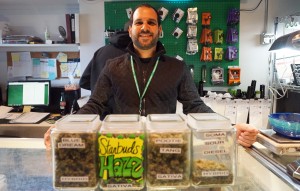 Fox said the LoHi Grass Station saw about 600 customers on Black Friday last year, and he is optimistic he’ll break that number at both Grass Station shops this year.

Fellow entrepreneur Brian Ruden, co-owner of the Starbuds chain of six recreational shops and a planned edibles kitchen, said he also hopes to cash in on “Green Friday” for the second year in a row.

“The biggest day of the year, no surprise, is 4/20,” Ruden said. “But Black Friday is one of those days that we look forward to as a retailer. It’s a good chance to hopefully bring in new people and have them become regulars.”

Starbuds is offering tongue-in-cheek discounts like four joints for $20 and $99 ounces for the first 10 customers through the door Friday morning. The chain is also offering double rewards points for those enrolled in its customer loyalty program.

Some discounts will only be available Friday, while others run through the weekend.

Ruden estimated that Starbuds could see double the visitors and revenue of an average Friday, a similar boost in sales as last year’s Black Friday bump.

Meanwhile, Good Chemistry, which opened its second shop in Aurora earlier this year, is also participating in Friday’s green rush, according to the store’s director of retail operations Steve Spinosa.

“Historically, we see an increase in traffic flow in our stores,” Spinosa said. “We didn’t have a big special last year; we were just super busy.”

Black Friday kicks off a time of year leading up to the holidays that usually sees customer interest sparking up, Spinosa said.

Good Chemistry, which has recently introduced gift cards, will sell joints for a penny when a customer buys $50 worth of gift cards. The shop is also offering a discounted 7-gram sampler pack of flower, Spinosa said.

The Green Solution, a chain of recreational and medical cannabis shops with 12 locations throughout the metro area and high country, its taking another page from the retail playbook and offering Cyber Monday deals.

Customers can’t directly buy cannabis on Green Solution’s website, but they can reserve an item for 24 hours and come in to pick it up at their convenience at an express checkout lane.

“The technology’s pretty new – we are, as far as I know, the only cannabis company in Colorado that does online reservations,” said Chris Mapson, the company’s spokesman. “We were watching retail trends, and Cyber Monday is becoming larger as opposed to Black Friday, and we want to be on the forefront of that.”

Grass Station took out two full-page ads in Westword ahead of Black Friday.