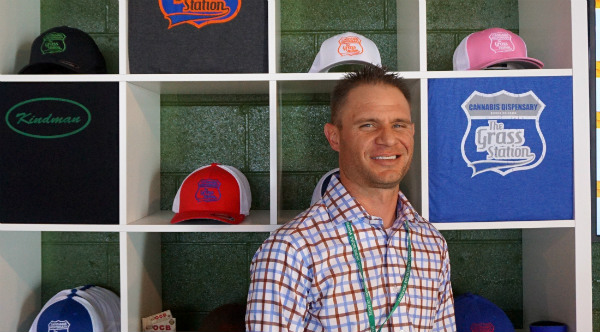 Ryan Fox’s Grass Station Dispensary is stepping on the accelerator.

The Colorado native opened his second cannabis shop in July in Stapleton. And he’s building a new grow warehouse that will triple his production capacity closer toward I-70.

“The first few days have been a gradual opening,” Fox said. “We’re only at 70 percent of the inventory that we like to carry. Hopefully that hits 100 percent over the next week or so and we can start integrating some advertising.”

The 4,500-square-foot, two-story Grass Station opened June 19. The building was formerly home to the Metro, a bar that opened in the mid-2000s at 7200 Smith Rd. Fox said he liked the location because it’s close to hotels and a large residential area.

“We felt like it would be a great place for a large dispensary that could handle a high volume of customers,” Fox said.

“We’ve got a lot of traffic out here and felt like it would be stable and a great long-term play.”

The Stapleton Grass Station is licensed to sell only recreational marijuana, but will honor medical pricing for card-holding patients. Out-of-state shoppers have provided big business.

“Texas is always our No. 1 tourist state,” Fox said. “They’re a huge state and geographically, we’re the closest place they can buy cannabis.”

Fox also is renovating a 35,000-square-foot grow space located near I-70 and Colorado Boulevard. He plans to have the warehouse operational by September, and estimates it’ll allow him to grow an extra 600 pounds of his Kind Man-branded cannabis per month.

At $9 per square foot per year, the rent is double what he paid four years ago for a building on the same block, Fox said.

He worked as an electrician for 17 years before opening the first Grass Station in 2010. He said he looked to 7-Eleven as a model he could replicate.

“You walk into one of those and they’ve got everything – Coke, Pepsi and snacks. We want to have everything available here,” he said. “We carry multiple lines of flower, concentrates, vaporizers, and edibles.”

The headline is misleading. North Park Hill is getting this business, though located near the Stapleton Development, You could factually say it is located just west of Stapleton in North Park Hill. The business is adjacent to generally industrial uses, not located in a commercial shopping center, nor is actually part of Stapleton.

Though that headline is simply not as enticing and would not get the same number of click throughs.

I really appreciate the information that I have been getting from BusinessDen.