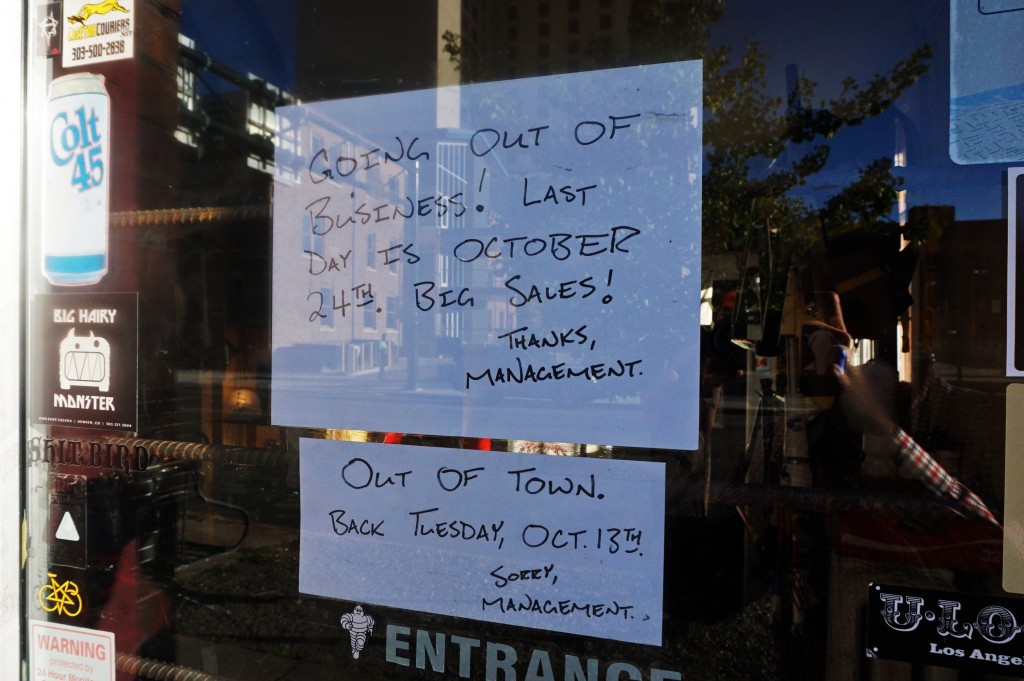 Track Shack is shutting down later this month. Photos by George Demopoulos.

A downtown bike shop that specializes in track bikes will shut down at the end of this month.

The Track Shack will close out its final lap on Oct. 24. Founder Curtis Wallach, who opened the store in 2008, put part of the blame on Denver’s cutthroat real estate market.

“I’m closing because rent was raised, as is happening all around Denver,” said Wallach, 32. “But I’ve also got a new daughter who is seven months old, and working retail is a bummer.”

Wallach claims that his landlord, Dikeou Realty, cranked up his monthly rent payments on the 400-square-foot space at 1338 Tremont Place by 45 percent.

Dikeou did not respond to several calls seeking comment.

The Track Shack deals primarily in sales and service of track bikes, a type of fixed-gear racing bicycle with a particularly rigid frame, thin tires and no brakes that became popular in the 19th century. The bikes are designed to race around a velodrome: a circular track with steep sides. 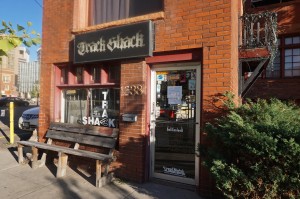 About 60 percent of the Track Shack’s revenue comes from sales, with the remaining 40 percent from service calls, Wallach said.

The store also organizes bike races around the Front Range and will hold its final “Track Shack Attack” fixed-gear bike race on Oct. 17 and 18.

Wallach, a Denver native who went to Kennedy High School and began working in the cycling industry in his teens, said that the rent hike is a symptom of Denver’s growing population.

“The tech industry boom, legal marijuana – people are finding that Denver’s a good city to live in and they’re making it a bad one,” he said. “It’s too expensive to work in retail for the same reason: It’s $1,200 a month for a tiny one-bedroom apartment in Capitol Hill.”

The Track Shack’s closing will mark the end of Wallach’s tour in the bike industry, which began when he started working in his father’s bike shop, Green Tree Cyclery, at 1529 Pearl St. at age 13.

Wallach also worked as a bike courier and founded his own company, Cheetah Couriers, in 2006.

The Track Shack isn’t the only Denver bike shop to shut down this year. Salvagetti Bicycle Workshop closed last month after an 11-year run.

Track Shack is shutting down later this month. Photos by George Demopoulos.

A downtown bike shop is pedaling toward its last day in business, and its owner says a significant bump in rent is partly to blame for the shut-down.

It is the fixie market niche that killed this business, not the rent!
This is a hyper competitive marketplace and sales are incredible strong in the consumer direct channel. These types of bike owners are historically “cheap” and lower income earners than purchasers of higher end more utility oriented bicycles.
There isn’t much justification in spending a whole lot of money to tune these machines due to their simplistic nature. That, paired with the ultra frugal nature of these types of bike owners makes being successful in this niche a tough proposition.
It is too bad to lose another local business, but not really a big surprise to those in the industry that they couldn’t make it.

A 3rd shop Mindful Bikes is closing this fall, too. It’s very sad to see the Denver market losing a few great shops, but it potentially means there are stronger and smarter shops surviving.

This article fails to convey the fact that I simply don’t want to do it anymore. In the end, what will constitute the biggest role in killing the business, David, is waning passion. I do agree with you in your profiling of the typical “fixie” owner, although that was not my target demographic. This is a classic example of making what you love your business, and having your love for that thing depreciate simply because of the nature of business.

I do not know why George attempted to give this article a me vs. Dikeou Realty skew. Though rapidly rising rent played a small part in my decision to shutter up, I obviously understand why rent is climbing all around the metro area, and do not fault them for squeezing what they can out of their property.

Another quick note, “Greentree Cyclery” is at 1549 South Pearl Street, in the Washington Park neighborhood.

I rented that space in ’98-’99 for about $500. Had also previously rented an office from Dikeou in the Colorado Building (1615 California St?) for $73/mo!! Dikeou never did me wrong, and I understand keeping rent with market value. But its sad how much it has gone up. When I first moved to Denver in ’93, I paid $250 flat for a 2bd apt in a remodelled Victorian house on the 1200 blk of Pennsylvania! Part of what I loved about Denver in those days was I called the Pioneering Entrepreneurial Spirit alive in Denver. Perhaps ot still exists. But you didn’t have to be rich then. The creative spirit abounded in what was going on everywhere you looked. Of course, that was in part possible due to the 70% vacancy rate of downtown in the seventies. Que sera sera. Good job on going with your dream Curt!
Scot