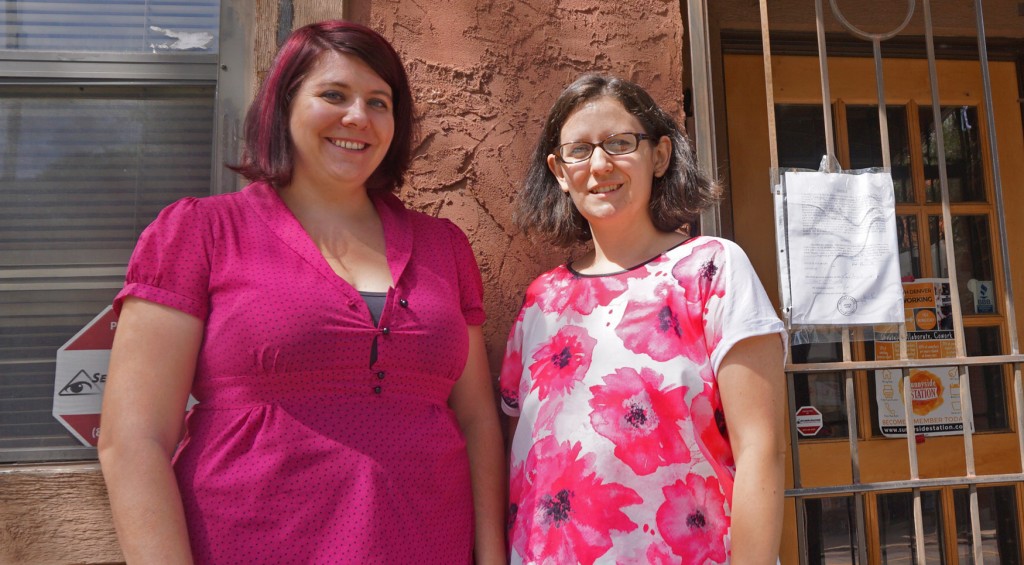 The co-working wave is sweeping into a rejuvenated block in North Denver.

Nicole Skorka and Julia Monahan hope to open Sunnyside Station next month as a 3,000-square-foot co-working spot at 40th and Tejon.

“There aren’t any office parks here, but lots of entrepreneurs, freelancers and remote workers in North Denver,” Skorka said. “Unless they work from home or have a budget to rent an office, workplace options are few and far between.”

Skorka and Monahan toyed with the idea of opening a co-working space for the last five years. But things got serious when they began distributing questionnaires to local businesses in February.

“We asked questions like, ‘do you work as a freelancer,’ ‘have you heard of co-working’ and ‘would you use this kind of service?’” Skorka said. “We sent them out to the Mile High Business Alliance’s network, Sunnyside United Neighbors and the Highlands Mommies business group. That’s how we picked the name, too.”

They received responses from 60 local businesses, and results were promising enough for them to move forward with Sunnyside Station, Skorka said.

In July, the pair signed a lease to rent the 3,000-square-foot property, located at 4047 Tejon St., for $7,000 per month. New businesses have recently been popping up in the area, including Cherry Bean Coffee a block away, and a new restaurant is in the works.

Skorka and Monahan have been working on renovations to their space since July under a $14,000 budget that Skorka is financing through her web design company, Nico Associates.

The two have done most of the building’s renovations themselves, with the aid of friends and family.

“We’re do-it-yourselfers, so we’ve had a lot of friends donate their time and energy,” Monahan said. “We’re remodeling the bathrooms, remodeling the kitchen, and having a painting party closer to the opening date – anyone who helps us paint will get a free day pass.”

The duo is also running an independent crowdfunding campaign on Sunnyside Station’s website to help offset construction costs. They’ve raised over $3,000 of their $10,000 goal, which will help pay for fixtures and amenities at the co-working space.

Customers who want a dedicated desk will pay $350 a month. Five customers have already signed up. Amenities include Wi-Fi, a kitchen, meeting rooms and – a point of personal pride for Monahan and Skorka – free unlimited coffee.

Co-working spaces are furiously opening around town. But Monahan said the industry isn’t just a bubble waiting to pop.

“In the traditional structure of an industry life cycle, (co-working is) definitely still in the growth phase,” she said. “Will it look like it does now in five years? Maybe not, but it’s not going away. I don’t think that co-working is inventing a culture that’s a fad.”

Monahan, 32, met Skorka, 31, in 2007 when the two were working for online toy retailer eToys.com in Denver. Toys R Us bought eToys in 2009, and Monahan signed on to work with Skorka at Nico Associates.

I think this is a wonderful idea! How does one sign up to help out with the painting party?

If you’re interested in helping out please visit our website at http://sunnysidestation.com and scroll down to the bottom to sign up for our newsletters. We will be sending out updates and more details as we firm them up.

Thanks so much in your support!