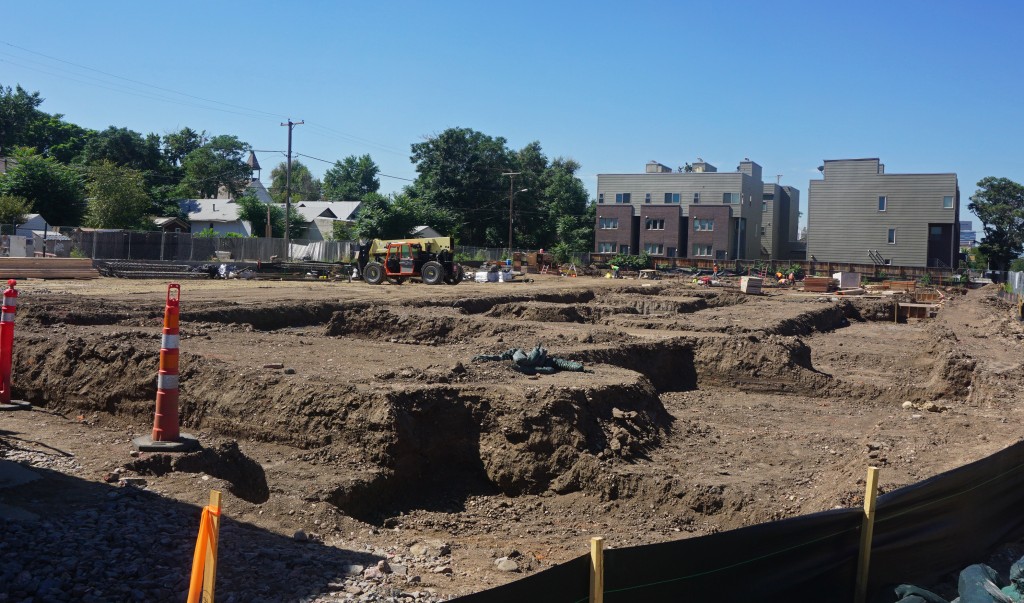 Site work is underway at 35th and Larimer. Photo by Burl Rolett.

RiNo’s in a growth spurt, but its latest apartment project is going small.

“People look to markets like Portland and Seattle and see this as a new trend when, if you look at Capitol Hill, there have been micro-units for ages – they just used to be called ‘studios,’” Bush said. “These allow price points where renters can enter the project for less than $1,000 a month, which is getting harder to find.”

Littleton Capital Partners will build on about an acre at the southern corner of Larimer and 35th streets. The firm bought the land for $2.5 million in a pair of deals in November 2014.

The complex will include 10 of the micro-apartments. Developers have been blending the smaller units into new construction in the past years on projects in the Highlands, Tennyson Street and at the forthcoming Turntable Studios near Mile High Stadium.

The complex will have space for commercial tenants on the ground floor. Rendering courtesy of Littleton Capital Partners.

About 70 percent of the remaining units will be larger studios and one-bedrooms. The rest are two-bedrooms with the largest apartment topping out at 1,160 square feet. Rent rates, Bush said, will average slightly more than $2 per square foot for the entire building.

With an average unit size of 673 square feet, that puts an average per-room rent rate just above $1,350. Bush is estimating the project will appeal to younger renters.

“Everybody is leasing to millennials, and I think at times it might be becoming an over-wrought go-to, but at this project we are expecting a younger population,” Bush said.

Bush said he’s close to having three of those spaces leased to a pair of restaurants and a fitness outfit. Rates on the commercial space are running in the mid-$20 range up to about $30 per square foot, Bush said.

Humphries Poli is the building’s architect and Drahota is the general contractor. The PrivateBank is financing the build.

The 35th and Larimer deal won’t be Littleton Capital’s first development near River North. The company previously developed the building at 2124 Larimer St. that houses restaurants Trillium and Ignite, as well as the Mile High Spirits building at 2201 Lawrence St. The firm has since sold those properties.

Littleton Capital is digging back into RiNo as the neighborhood is becoming a Denver hard hat hot spot. On the other side of the railroad tracks, super-sized apartment deals are in the works at Denargo Market and Industry. And across the river, Zeppelin Development is adding 48 apartments to its Taxi complex.

Still, Bush said he thinks there’s room for his Larimer Street apartments. He hopes its smaller size will help it blend in with the surrounding neighborhood.

“There’s a big difference in the feel of a big, 250-unit, 300-unit project and a 60-unit project,” he said. “The bigger projects are more amenity-focused. With this project the amenities are just outside your front door.”

Site work is underway at 35th and Larimer. Photo by Burl Rolett.