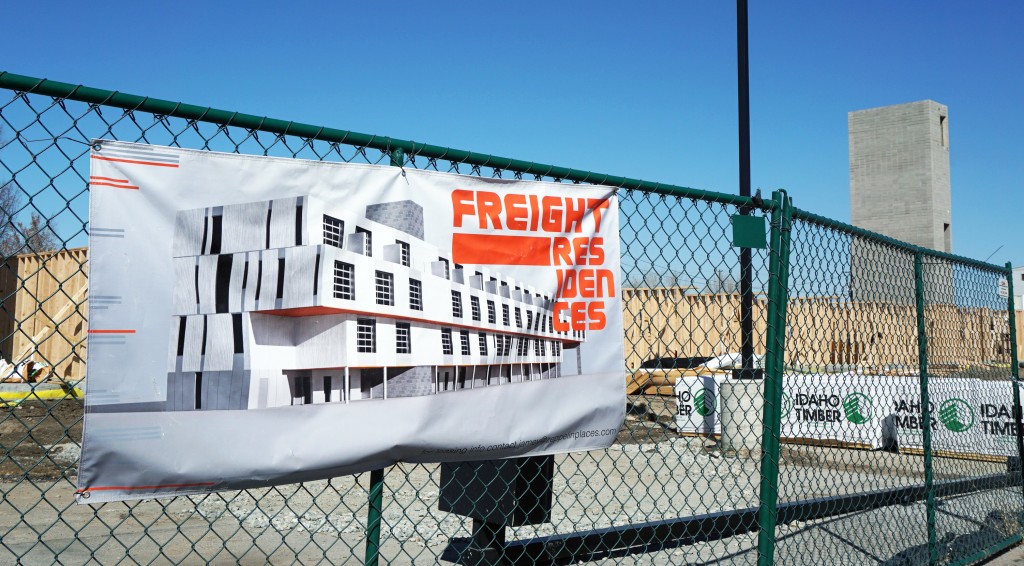 Construction is underway on the Freight Residences project in RiNo.Photo by Burl Rolett.

RiNo’s apartment boom will soon have something new to offer the young family looking to rent.

Zeppelin Development is building its Freight Residences building at Taxi in RiNo, an $11 million apartment project with mostly two-, three- and four-bedroom units.

“It’s a counterpoint to the millennial-focused projects: the apartment buildings that are heavily weighted towards one-bedrooms with the amenities suited to that generation,” said Kyle Zeppelin, a principal at Zeppelin Development. “Other people want benefits of living urban, too, and that frat-house format doesn’t work very well for them.”

Plans for Freight Residences call for a four-story, 50,000-square-foot building on the northeast end of the Taxi development.

The 48-unit building will consist mostly of two-story walk-up apartments. The units in the lower half of the building will open to an outdoor courtyard. On the third floor, there will also be 16 one-bedroom apartments.

Units will range from about 650 square to 1,400 square. Zeppelin said rooms will rent for $1,300 for the one-bedrooms and up to $2,800 for the most expensive four-bedroom apartments.

Freight Residences broke ground on the project in October. If construction continues on schedule, the building will be finished this summer. Brinkmann Constructors is the project’s general contractor, and Stephen Dynia Architects handled design. Great Western Bank is financing the construction.

Freight Residences will be the first for-rent project Zeppelin has built at its mixed-use RiNo Taxi development. The firm built 44 condos into its Taxi II building, but the project opened into a rough real estate market in 2008. The company held 20 of those units and has since leased them as apartments, Zeppelin said, but is now looking into selling them as condos.

Zeppelin said his firm plans to eventually sell units at Freight Residences as well – and the larger units would be easier to sell than smaller apartments – but the company doesn’t have any immediate plans to convert the building to condos.

“You try to preserve the ability to sell them, but that’s not our immediate goal,” Zeppelin said.  “It’s maybe a little bit slower money, as we’re not looking for a quicker exit. But we’re not looking to just build a project, wash our hands clean and move on to the next one.”

Construction is underway on the Freight Residences project in RiNo.Photo by Burl Rolett.

Turning away from the one-bedroom boom, a local developer is building a nearly 50-unit apartment project in RiNo that will be targeted more toward young families with two-story layouts.