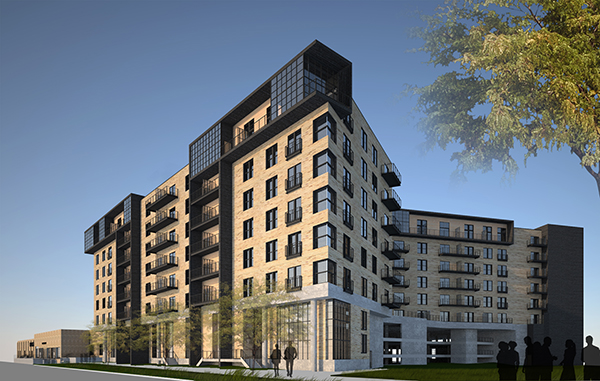 Plans are in the works for more apartments in RiNo. Rendering courtesy of Lynd Co.

With the ink dry on a seven-figure land deal, another Texas-sized apartment complex is almost ready to go in RiNo.

“We really liked the opportunity to work with the Industry building next door and designed a project that plays off of the location of Industry,” said Jim Bruner, Lynd senior vice president of development. “We’re working on creating an interactive, 24-hour work, live and play area all within a block of that RiNo area.”

Lynd paid $3.8 million for the 1.8-acre site at 3063 Brighton Blvd. The company plans to begin construction by the end of the year. Bruner estimates it will take about 21 months to build the apartment project. 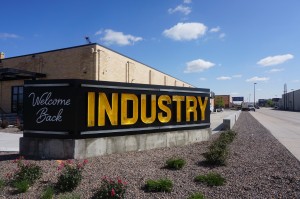 The apartments are designed to complement the Industry office building and upcoming development. Photo by Burl Rolett.

“In our minds, it is a younger group,” Bruner said. “But the demographics are changing all over Denver, so it wouldn’t surprise us to see some empty nesters moving back in.”

The project includes a mix of studio, one-bedroom and two-bedroom apartments with a couple of two-bedroom walk-up townhomes. The apartments will be spread between six floors atop a two-story parking structure.

“We really wanted to design the two-level parking garage to elevate the building above the Industry building, so we could have unobstructed views of downtown,” Bruner said.

Chicago-based Valerio Dewalt Train Associates designed the Industry apartments. HKS is the project’s civil engineering firm, and Valerian is the landscape architect. Lynd has yet to name a general contractor.

Another 73,000 square feet of office space is currently under construction at Industry. Plans also call for a brownstone complex in addition to Lynd’s apartment project.

The Industry project will be the second Denver apartment deal for Lynd Co. The firm is currently building the Joule in the Golden Triangle, a 270-unit tower at 1000 Speer Blvd. Bruner said Lynd is keeping close tabs on the Denver market for more apartment projects.

Plans are in the works for more apartments in RiNo. Rendering courtesy of Lynd Co.

Following the lead of the expansive office-based Industry development, a Texas firm has jumped into the RiNo neighborhood with plans for an eight-story apartment project.