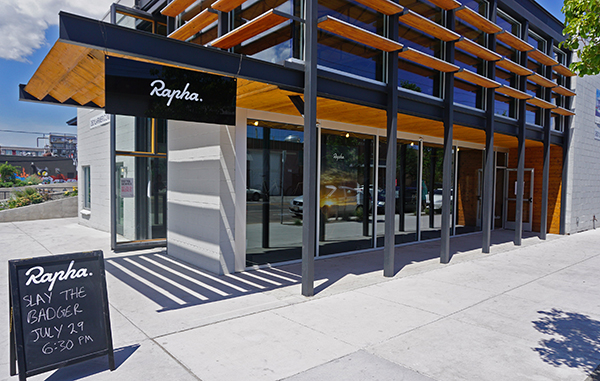 A temporary Rapha store has popped up on Larimer Street. Photos by George Demopoulos.

“A lot of people have their eyes on Denver because there’s so much great cycling in the area,” said Charlie Cunningham, the manager of the pop-up and the company’s San Francisco store. “There’s a bike community and a developing and maturing bike culture. You can ride over the tallest paved road in the country (at Mt. Evans).”

The pop-up, at 26th and Larimer in RiNo, opened last Thursday and will close on Tuesday after a 13-day run. Rapha is leasing the property, a building it shares with the First Draft taproom, for two weeks. Zall Co. broker Kyle Framson represented Rapha on its short-term deal.

Rapha’s 4-year-old San Francisco and 2-year-old New York City stores both started as pop-ups, Cunningham said. If this one does well, he said, Denver will be well on its way to having its own brick-and-mortar Rapha location. 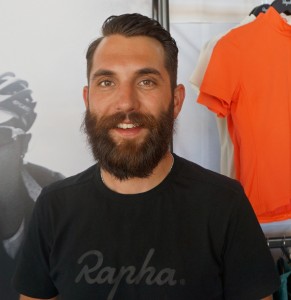 “We did a pop-up in Japan, which resulted in a store in Tokyo,” Cunningham said. “London started as a pop-up, too. It’s how we test an area as we grow our network.”

The store is being staffed by a temporary four-person crew from London, New York, San Francisco and Portland.

Cunningham declined to comment on revenue or sales numbers but said that the pop-up is on track to make a profit. The store saw 200 customers the first day it opened and about 50 each day since, he said.
While opening a short-term location is good for gauging a market’s interest in a Rapha store, there are some disadvantages to the pop-up model.

“By the time some people hear that we’re here, the store is already closed,” Cunningham said.

Rapha began as an online-only business in 2004 and has since grown to include 10 stores worldwide. The London-based company sells soft goods like jerseys and shirts, publishes its own magazine and organizes cycling-related events.

Rapha offerings include riding jerseys from $140 to $195, bibs and tights at upwards of $230, shorts, gloves, caps, shades, water bottles and bags.

The company liked Larimer Street for its Denver pop-up because it was a bike-friendly location near downtown.

“We connected with a couple locals that we knew who recommended the area,” Cunningham said. “We were looking for a good nexus for cyclists. This is close to downtown along a bike lane.”

A temporary Rapha store has popped up on Larimer Street. Photos by George Demopoulos.

While it may be a hip area, I doubt the demographic that buys $400 plus cycling kits lives in RiNo. Curious location selection. Cherry Creek North might work. Better demographics, more central, greater density. Then there is the rent…