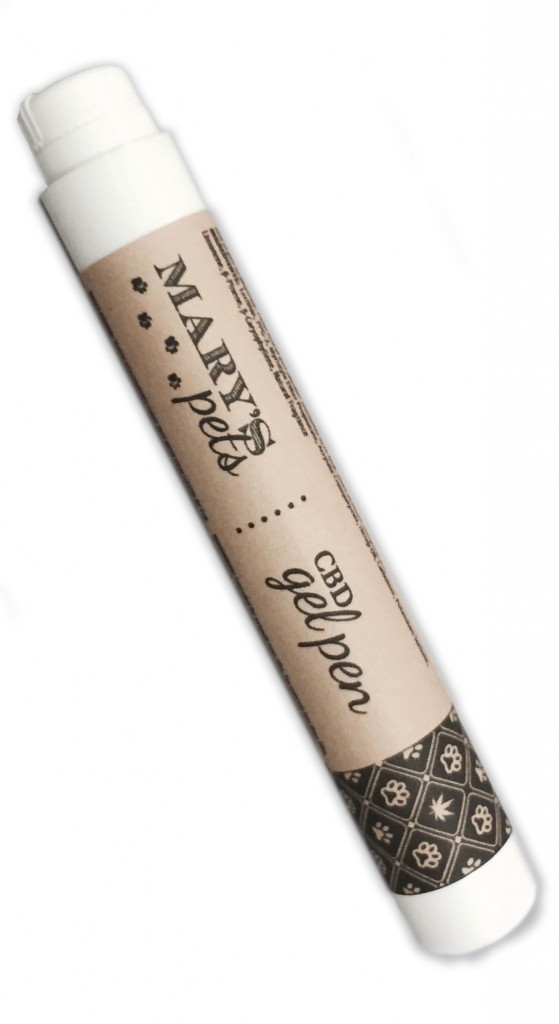 The pen is used to apply cannabis gel to the inside of an animal’s ear. Images courtesy of Mary’s Medicinals.

And you thought your dog already spent too much time eating biscuits on the couch.

Mary’s Medicinals, a Denver company that developed medicated cannabis patches, is extending its product line to include a marijuana-infused topical gel for dogs and cats. The gel reduces a pet’s inflammation, pain and anxiety, said Mary’s Medicinals founder Nicole Smith.

“When we started making (patches) about a year ago, the topic came up that this would be a really good way to give it to a dog or a cat,” Smith said. “The market is primed at the moment. I think that people now are starting to look at cannabis alternatives for pets.”

The gel is based off of Mary’s Medicinals’ flagship product, the topical patch for people. The gel comes in a pen-like applicator and is applied in single-milligram doses to the inside of a pet’s ear and is absorbed through the skin.

The 50-millligram applicators cost $40 and are available on the Mary’s Medicinals website.

Smith uses high-cannabidiol (CBD) marijuana strains in the gel, purchased from Elite Botanicals in Loveland. Because of the chemical makeup of Elite’s cannabis, it is classified as hemp instead of marijuana under federal law and can be distributed outside of Colorado.

CBD is significantly less psychoactive than its more popular cousin, THC, which is the chemical in pot that gets a user high. Instead, it has anti-inflammatory, anti-anxiety and anti-seizure properties. CBD is currently sold as a pharmaceutical under the brand name Epidiolex.

It’s a natural alternative to over-the-counter anti-inflammatories like aspirin, and the applicator makes it easier to dose a pet than trying to force Fido to swallow a pill, Smith said.

Because of the gel’s low THC content, Mary’s can’t produce it in its state-licensed cannabis facility at Havana Street and Interstate 70. Instead, it’s produced at a 2,200-square-foot facility in Parker that the company rents for $1,100 a month.

“That’s the nice part about being able to buy or rent facilities that aren’t zoned for cannabis – they’re much more affordable,” Smith said.

She expects Mary’s to outgrow the facility soon.

“We anticipate the growth of that part of the company will be fairly rapid and we’ll need to move into a new facility within the next year,” she said.

While some might balk at the idea of giving their furry friends pot, Smith said that the product is safe for animal consumption because of its undetectably low THC content.

“THC is one of the things we want to avoid. That’s why I think CBD products are perfect,” she said. “We’ve talked to a couple vets when we were doing research. They’re all huge fans of the idea.”

Dr. Kevin Fitzgerald is a veterinarian who’s worked at Denver’s VCA Alameda East Veterinary Hospital for his entire 33-year career. He has been interviewed by major news outlets and authored papers about marijuana’s effects on pets. Fitzgerald is hesitant to welcome marijuana as a wonder drug.

“A lot of claims are being made about marijuana. It can be used for glaucoma, appetite stimulation, as an anti-nausea medicine for cancer patients, and for muscle spasms for people with MS,” Fitzgerald said. “But now we’re seeing a lot of claims being made with everything from epilepsy to cancer. The drugs I use have to be safe and they have to be tested in clinical trials. I think that we need some rational testing, and I think that there will be some beneficial effects. But until that happens, I’m not putting anything on anyone’s ear.”

The pen is used to apply cannabis gel to the inside of an animal’s ear. Images courtesy of Mary’s Medicinals.

The maker of a marijuana patch for people is expanding into the pet market with a new product designed to soothe animals with a small dose of cannabis.

Well I don’t think people will exactly be scrambling to get this, but I think it’s pretty neat that it exists at all! I’m curious to see how it compares pricewise to “normal” medications.

I have a Great Dane with issues of chewing on himself. He is wonderful pet, but will not stop chewing. Not sure what is up. Been looking into CBD’s and your product may be the answer. Can you give dosages and about how long an applicator should last? Titan is 172 pounds. Thanks, John