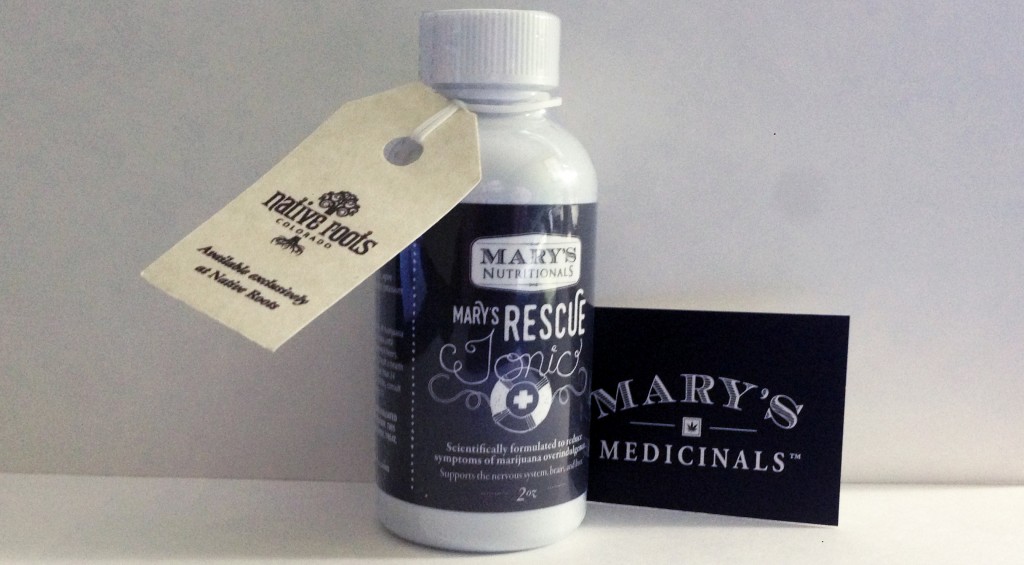 Nicole Smith’s latest product comes in the same-sized bottle as those ubiquitous 5-Hour Energy vials. But her product, Mary’s Medicinals, is intended to have the opposite effect: to calm users down.

The Denver-based manufacturer of cannabis products announced the release of its Rescue Tonic at this year’s recent Cannabis Cup as a quick fix for marijuana users who have overindulged.

“I realized there was this huge void to fill,” said Smith, Mary’s Medicinals founder. “We’re continuing to see stories in the news and seeing the bad rap that edibles are getting in the news; the idea just formed.”

The Rescue Tonic is the result of six months of research, development and testing that began last year, Smith said. It contains an array of ingredients intended to alleviate symptoms of marijuana overconsumption like paranoia, anxiety and confusion. All of the ingredients are derived from plants, Smith said.

To increase production, Mary’s is in the process of moving its entire manufacturing base into an 11,000-square-foot facility near Havana Street and Interstate 70. The company purchased the property for about $1 million in December. The move will be finished by the end of the week, Smith said.

Each dose of the tonic comes in a 2-ounce bottle. Its effects last between two and three hours, and it has a shelf life of a year.

The target retail price for a bottle is between $8 and $10. And it’s flavored like cherry pie. Mary’s had its first tonic prototypes ready earlier this year and tested the drink on employees.

“It’s not every day that your boss asks you, ‘Hey, can you try this over the weekend if you get too high?’” Smith said. “It tends to be very subjective – it’s not something we can do a blood test on. You’re either feeling high, or you’re feeling not high.”

The tonic’s target consumer is someone who’s unfamiliar with the adverse effects of cannabis. It can also be handy for an experienced marijuana user who has friends who are just beginning to dabble with weed.

Because the tonic contains no cannabinoids, Mary’s can ship it nationally. The company plans on sending the drink to California next week. But so far, distribution has been limited to Native Roots stores in the state.

Native Roots has exclusive distribution rights to the tonic in Colorado through the end of July. Smith met with Native Roots’ CEO, Josh Ginsberg, and discussed distribution with him the week before the Cannabis Cup.

Smith founded Mary’s in 2013 with her business partner Lynn Honderd. Its flagship product is a cannabis patch designed to help alleviate the symptoms of epilepsy.

The company only operates in Colorado but has licensed its products to companies in Washington and California.
Mary’s doesn’t cultivate its own marijuana. Instead, it buys high-CBD strains from one of three commercial grows: Green Natural Solutions, Medicine Man and Elite Botanicals. Smith said that the growers were chosen because they don’t use pesticides, fungicides or herbicides.

Currently, Mary’s has 20 employees, but Smith said that may change soon.

“We’re growing very quickly,” she said. “It seems like every time I turn around there’s someone new working for us.”

Smith said that Mary’s will be releasing more products soon, but declined to comment on what they would be.

“It’s a very competitive market, and I want to keep that under wraps,” she said. “But we’re expecting the next one in a couple weeks.”

A maker of cannabis products has unveiled its newest creation: a tonic meant to mellow out marijuana users who get too high.