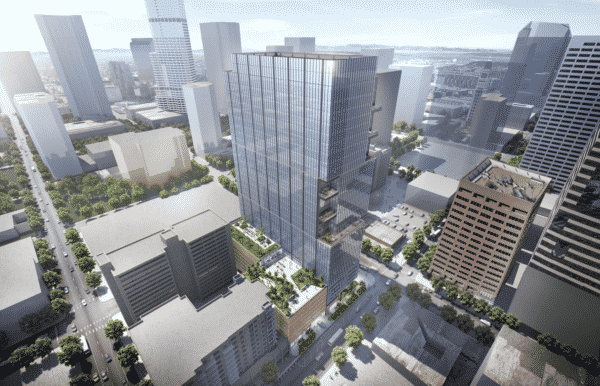 Seven months into construction, a 30-story office tower going up downtown has its first tenant.

Los Angeles-based Gibson Dunn has 1,700 lawyers in 20 offices worldwide, according to its website. The company has about 50 Denver-based attorneys, ranking it among the city’s 25 largest firms, according to a list maintained by the Denver Business Journal. Robyn Zolman is the partner in charge of the Denver office.

Riverside is developing the $400 million tower along 19th between Arapahoe and Lawrence streets in partnership with Convexity Properties and Canyon Partners Real Estate. The firms broke ground in April and expect to complete the project in May 2024.

The development team purchased the 1.26-acre site, formerly a parking lot, last December for $27.2 million. The tower was designed by Goettsch Partners, a Chicago architecture firm that recently added a Denver office.

Riverside’s big bet on downtown comes as many companies are using their office space less, and as other office developers are increasing building in RiNo and Cherry Creek.

In an interview, Riverside Vice President and Denver market lead Chris Payne noted that, even within downtown, “unfortunately it’s been a tale of two cities” with older office buildings in Upper Downtown struggling to retain and attract tenants more than buildings closer to Union Station.

“We’re very fortunate at 1900 Lawrence to be at the doorstep of LoDo,” Payne said.

Payne, echoing comments made by others in the industry, said there’s a “flight to quality” as companies that are committed to an office presence level up to newer spaces. In marketing 1900 Lawrence, Riverside is emphasizing its “hospital-grade ventilation systems” and touchless elevators along with the more standard marketing lines like “unparalleled views of the Front Range.”

Large law firms, which tend to value top-tier space, are often the inaugural tenant to commit to Denver office projects.

Last year, Sherman & Howard was the first company to lease space at the 30-story Block 162 downtown.

In January, Moye White announced it had signed the first lease at The Current, a 12-story office building going up in RiNo.

In June, Davis Graham & Stubbs was the first to commit to the eight-story Paradigm River North building under construction.

The deal comes seven months after 1900 Lawrence broke ground, and more than a year ahead of its completion.