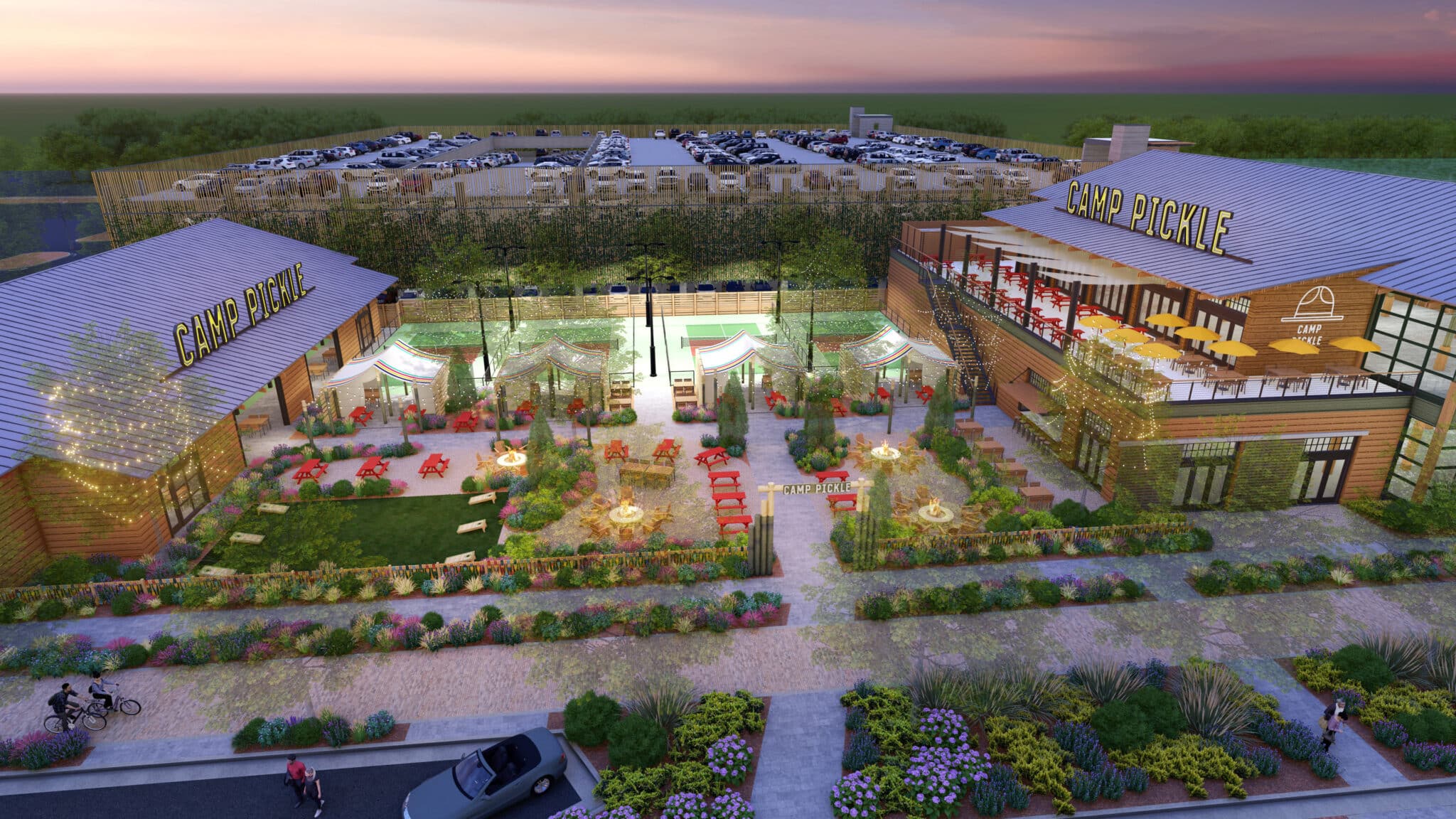 “I’ve been in the ‘eatertainment’ industry most of my career, so I thought there were other interesting things to do,” Thompson told BusinessDen.

Under his hospitality group Angevin & Co., Thompson is preparing to launch Camp Pickle, an indoor/outdoor pickleball facility with food and drinks, in 2024, starting with a location in Huntsville, Alabama, and another in Centennial. 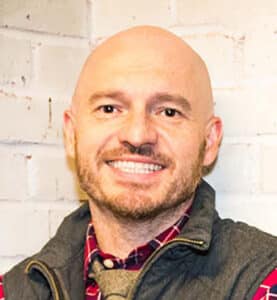 Thompson founded Punch Bowl Social, a restaurant with an arcade and bowling alley, in Denver in 2012 and eventually grew it to 20 locations and $120 million in annual revenue.

He resigned as CEO in August 2020 after the pandemic shuttered the company’s locations, and Cracker Barrel wrote a $140 million investment in the company down to zero. Punch Bowl filed for bankruptcy that December.

Thompson also used to own Uptown gastropub Argyll, which he closed in 2016 after two years of business.

“In a lot of ways Camp Pickle is just an extension of what I’ve been doing with the eatertainment model for almost 25 years, starting back in 1997 in Nashville to 2012 when I founded Punch Bowl Social,” Thompson said. “It’s about taking social activities, whether it’s bowling and karaoke rooms or pickleball, and creating a design-forward environment around it with made-from-scratch culinary and craft beverage programs.”

He added, “It’s my mousetrap that I’ve been using to compete against the folks in the casual dining category.”

Thompson has since moved to New Orleans, where he purchased the historic Frenchmen Hotel and is working on some other restaurant ideas.

“I know Denver so well and have the business relationships there, so it’s easy for me to get up to speed on a deal,” Thompson said. “I still get multiple calls a month about opportunities in and around the Denver area, and I’m there often for Three Saints Revival. So, it still feels like home.”

Thompson said he decided to capitalize on the growing popularity of pickleball, a game resembling tennis on smaller courts in which players use paddles to hit a perforated plastic ball over a net.

In February, the Sports and Fitness Industry Association named it the country’s fastest-growing sport for the second year in a row. Pickleball has 4.8 million players nationwide, according to the association.

“I play, but I’m more like who I envision most of our customers will be, a casual player having fun,” Thompson said. “Pickleball became popular with the older community as a workout. But anything an 80-year-old can do for fitness, a 25-year-old can do with a beer in their hand. It’s estimated that there will be 40 million players by 2030, but there’s only 20 million tennis players and golf players, which is why this will be a very assertive growth brand for us.”

He said the plan is to have 10 Camp Pickle locations open by the second quarter of 2026.

He was introduced to a developer in Huntsville, who is leasing the land to Thompson, which is why he is opening Camp Pickle’s first location there. It will be around 55,000 square feet and open in early 2024. 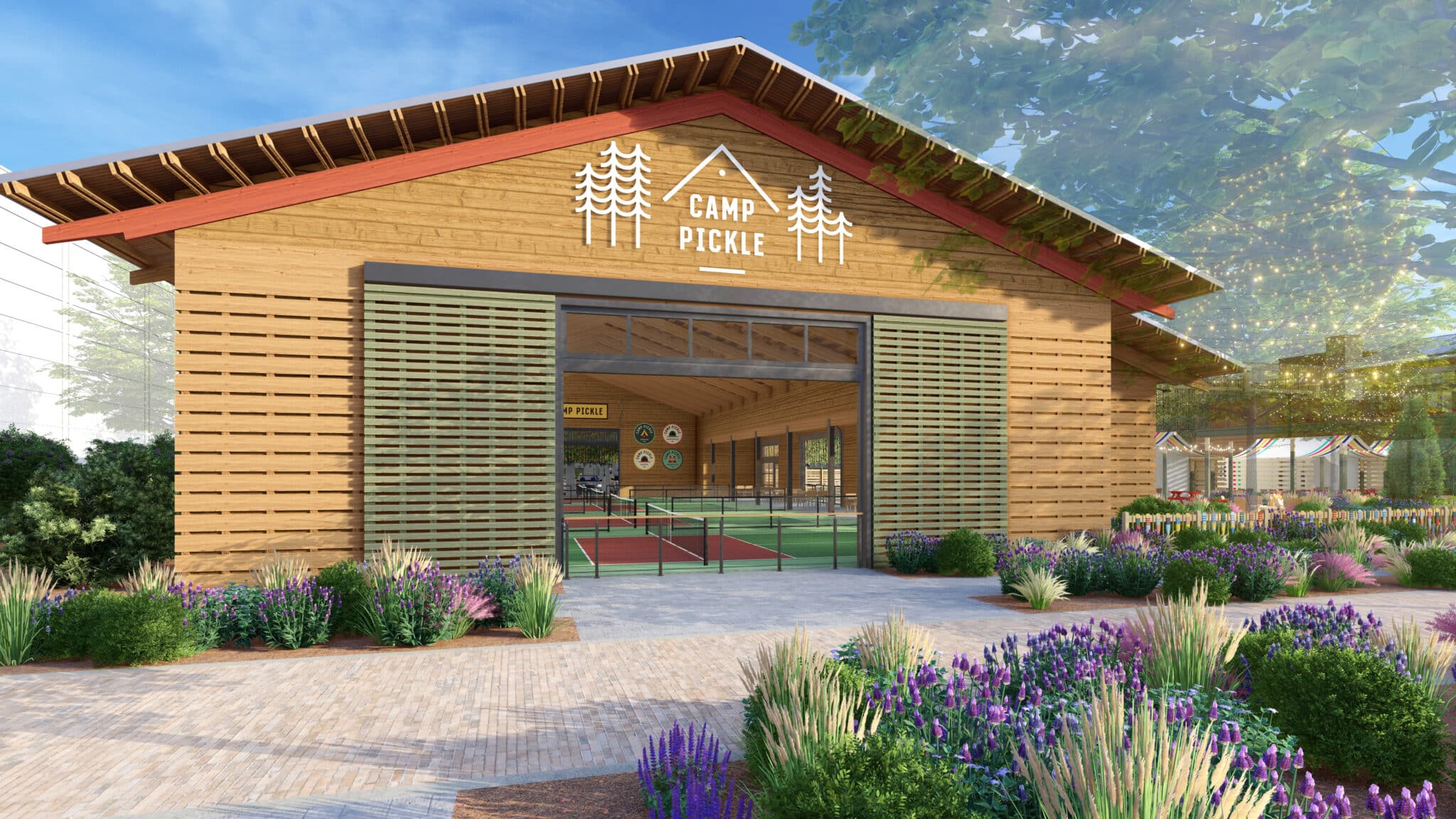 Camp Pickle will have a rustic 1940s summer camp theme.

In Centennial, Thompson is under contract to purchase 5 acres at 10959 E. Easter Ave., according to Robin Von Engelen with Asset Realty Advisors, who marketed the property for sale and is also part of the group that owns the land, Easterlima Development.  The lot was on the market for $3.6 million, according to a LoopNet listing.

Thompson said he plans to build a 70,000-square-foot facility in Centennial, with 14 indoor and outdoor pickleball courts and restaurant and bar seating throughout, as well as games like horseshoes, darts, bowling and shuffle board.

The space will have a “nostalgic Americana” design set to look like a 1940s rustic summer camp, he said.

Playful drinks like a cocktail served out of a Coleman cooler will tie into the camp theme, and food will be influenced by wood-fired cooking techniques with Front Range and Mexican twists.

He hopes to open Camp Pickle’s Centennial location in the summer of 2024 and said he has found a group of investors to fund the first 10 years of the business.

Thompson isn’t the first to open a pickleball business in Colorado.

Other brands around the country include Chicken N Pickle, which has six locations and three more in the works, Courtside Kitchen in Fort Worth and Painted Pickle in Atlanta.