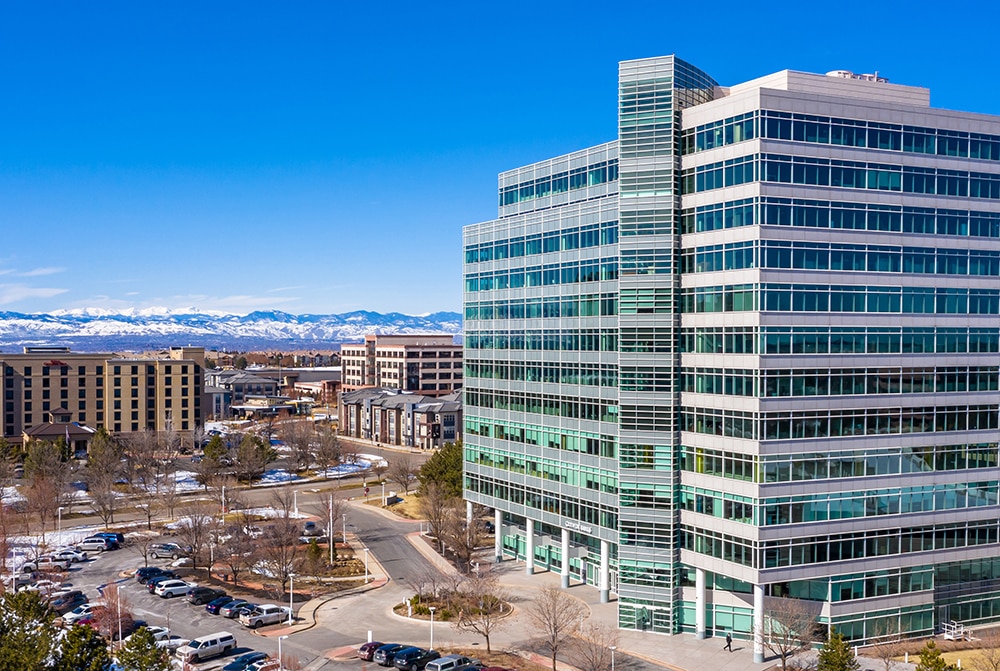 The office building at 4600 S. Syracuse St. in Denver sold for $74.3 million last year. The new owners have proposed putting up an apartment building on part of the surface parking lot. (BusinessDen file)

The owners of an office building in the Denver Tech Center are considering building apartments on a portion of its surface parking lot.

A concept plan submitted to the city of Denver in March proposes a seven-story, 252-unit building just southeast of the office building at 4600 S. Syracuse St.

The 13-story, 304,059-square-foot office building on 10.2 acres was purchased last year by Denver-based Miller Global Properties and Principal Real Estate Investors for $74.3 million. The property had last sold in 2001.

Kerry Mickelson, chief development officer for Miller Global, told BusinessDen the apartment project would be developed by his firm, Principal and Minnesota-based The Opus Group, but otherwise declined to comment.

The apartment building would have two levels of garage parking at its base, according to the plans. Some of the site’s existing surface parking would be retained and shared by both the office and apartment users.

The office building also has a small parking garage, which would remain standing.

Opus recently purchased the corner of Colfax Avenue and Kalamath Street in Denver, where it is beginning work on a 280-unit apartment complex.

The office building at 4600 S. Syracuse St. in Denver sold for $74.3 million last year. The new owners have proposed putting up an apartment building on part of the surface parking lot. (BusinessDen file)

The seven-story, 252-unit complex would replace some, but not all, of the surface parking at 4600 S. Syracuse St.