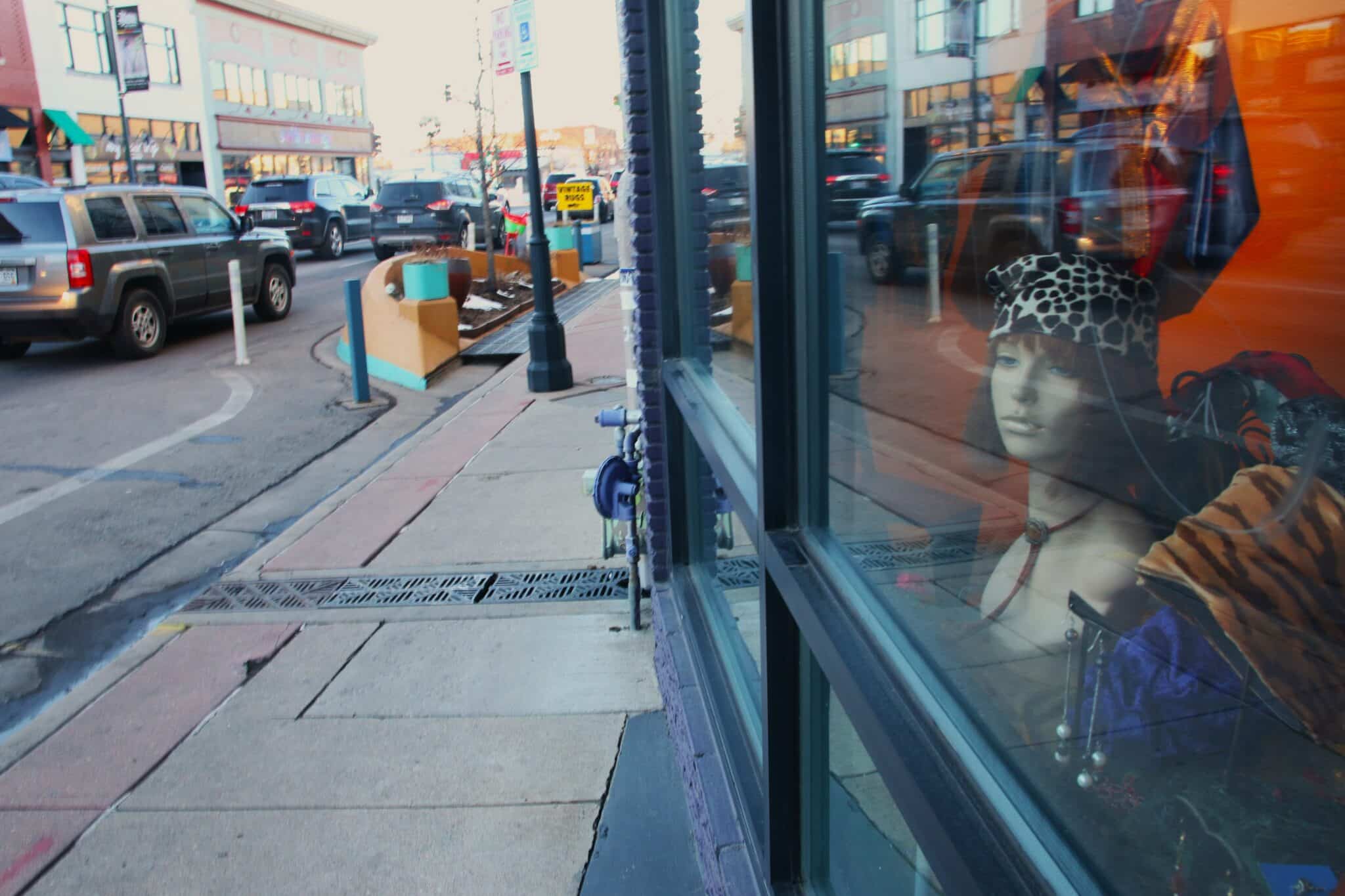 A mannequin head sits Tuesday in a storefront on Santa Fe Drive where a neighborhood organization is trying to establish building design standards that require ground-floor retail. (Eric Heinz photos)

Residents near the Arts District on Santa Fe want to make sure a 10-block section of the street remains a corridor of ground-level shops.

Councilwoman Jamie Torres filed a pre-application last summer calling for a design overlay district — essentially a tweak to the area’s zoning — to be established for the stretch of Santa Fe Drive between 3rd and 13th avenues, as well as some additional areas along 8th Avenue.

Most notably, the district would generally require the first floor of new buildings to incorporate retail space. Existing structures would not be affected.

“With all of the development, the neighborhood was really interested in making sure that Santa Fe was still a walkable commercial corridor and arts district — all of those things that make Santa Fe what it is,” Torres said.

The city has already approved one similar design overlay for Tennyson Street in the Berkeley neighborhood primarily between 38th and 46th avenues, a measure sponsored by Councilwoman Amanda Sandoval.

Santa Fe Drive through the Baker and Lincoln Park neighborhoods is a stretch of mostly one- to two-story buildings with numerous art galleries, as well as restaurants and small office users. 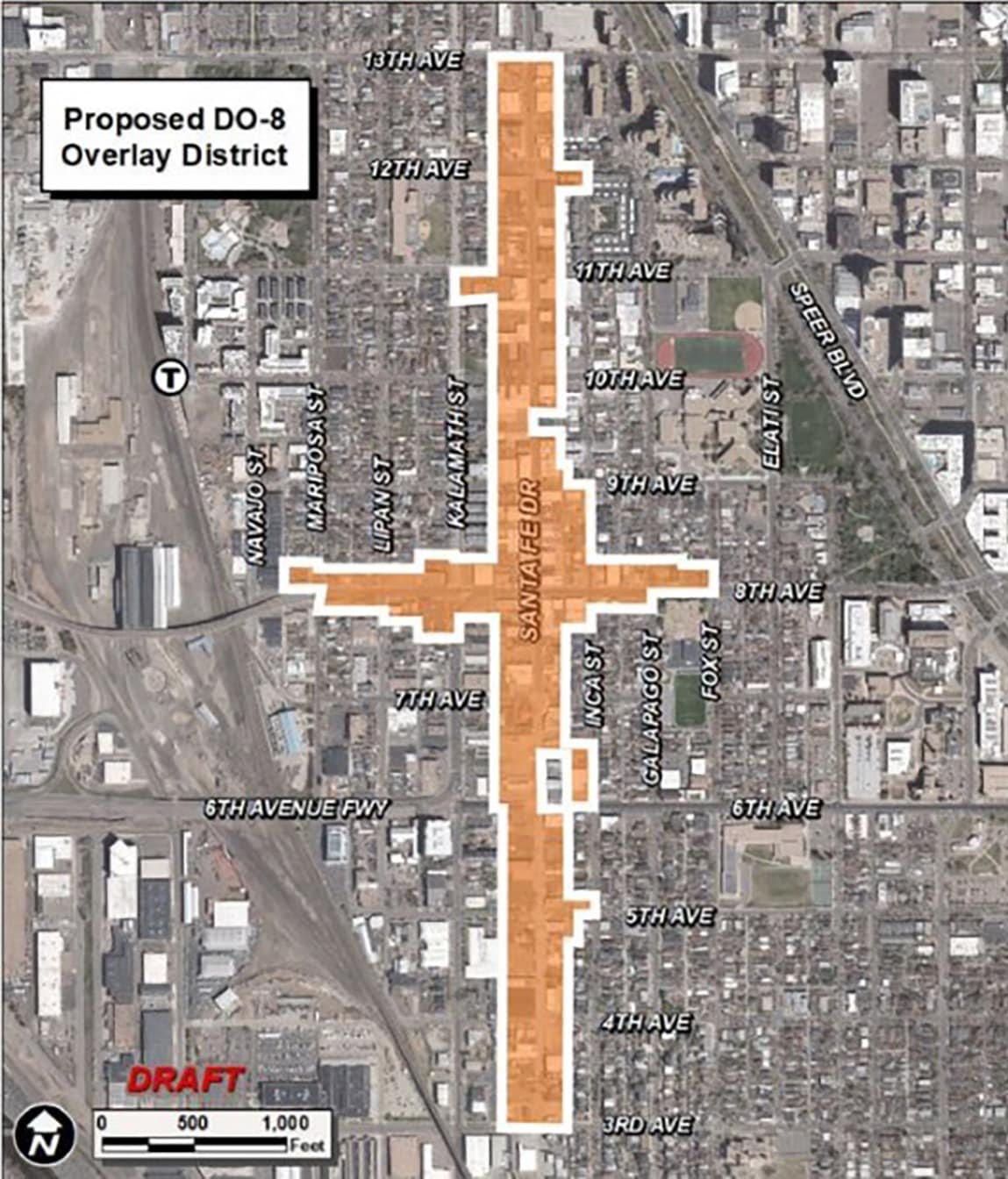 This map shows the proposed areas of the design overlay.

In recent years, however, large-scale residential development has been popping up. Washington-based Holland Partner Group is currently constructing a five-story apartment complex in the 1000 block, and developer Leon Cisneros is working on the second of his two eight-story apartment projects in the 1200 block.

Torres said her office and the La Alma-Lincoln Park Neighborhood Association are going to start reaching out to property owners to get their input on the proposed overlay, which would also allow new buildings to sit 10 feet back from the sidewalk to allow more room for pedestrians and outdoor dining.

Denver is already working on a project that would extend the sidewalk to where there is currently a white stripe along the corridor with white markers.

Ann Nguyen, a landscape architect and planner who is active with the neighborhood association, said although the measure would not impact building heights, there could be additional requirements for things such as adequate window space and driveway locations.

“We’re not really absorbing the vibe that other main streets are, and we’re kind of the last frontier,” Nguyen said. “I feel like people are starting to come because there’s a little more available real estate, but there’s also a lot more development. We want to encourage that development. This is not to discourage development.” 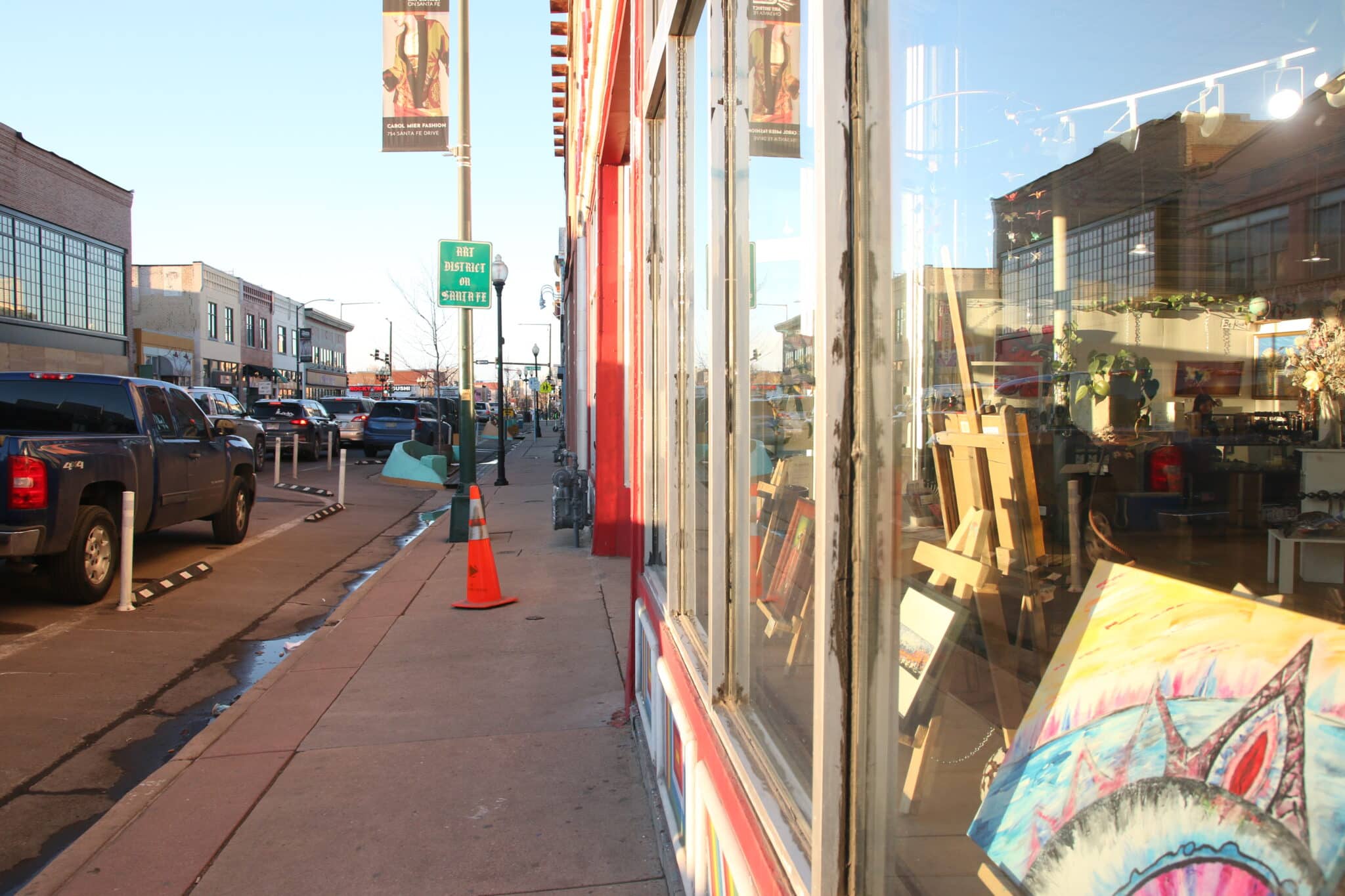 A neighborhood organization wants the city to establish a requirement for new buildings to provide ground-floor retail in the Santa Fe Arts District.

Nguyen said the group focused on the overlay has had mostly fruitful discussions with developers in trying to maintain the character of the area.

“We’ve been very lucky to have a lot of developers come by and want to work with us,” Nguyen said. “Sometimes we’re surprised because they don’t have to rezone. So, we don’t know about it until everyone else knows about it. But it’s been pretty good.”

David Griggs and Stella Yu moved into the neighborhood 26 years ago. They said they’re worried new development could price out some of the artists and other small shops in the neighborhood unless an overlay helps keep constant foot traffic along the corridor.

Yu said without maintaining the character of the Santa Fe Arts District, it could lose its identity.

“The thing is (developers) can leverage the work and the character of this district, and yet if they don’t do anything to support that, they’re really strangling our district, and you might as well just call it anything,” Yu said while walking along the corridor with a reporter last week.

The plans for the overlay began in 2017 with former Councilman Paul Lopez and the neighborhood association, but it stalled out for a few years.  If everything goes according to plan, the group hopes to have the overlay approved by the City Council in early 2023.

A mannequin head sits Tuesday in a storefront on Santa Fe Drive where a neighborhood organization is trying to establish building design standards that require ground-floor retail. (Eric Heinz photos)

Councilwoman Jamie Torres and nearby residents want a design overlay district to be established to maintain the character of the Arts District.