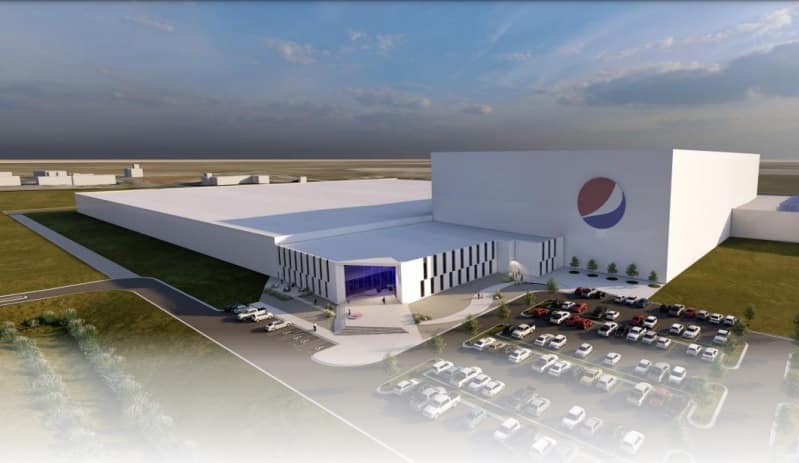 This rendering shows the potential design of a roughly 1.1 million-square-foot bottling plant Pepsi plans to build near DIA. (Courtesy of the city of Denver)

Denver is looking to incentivize Pepsi to pop the tab on its planned bottling facility near the airport.

The city is considering offering to pay New York-based PepsiCo $1 million over seven years in exchange for the company developing a roughly 1.1 million-square-foot bottling plant on 150 acres.

The facility would replace Pepsi’s current one at 3801 Brighton Blvd. in RiNo. Pepsi put that 30-acre property up for sale last summer.

The city estimates Pepsi’s initial investment by the airport would be $400 million, with additional expansion possible. It would be one of the largest business expansion projects in Denver in decades in terms of the investment, according to the city.

Chelsea Rosty, a spokeswoman for Denver Economic Development and Opportunity, said the $1 million is the only incentive proposed for Pepsi by the city at this time, and cited the importance of retaining jobs within city limits.

“The establishment of this facility in the community will help Denver advance its brand as a globally recognized innovation and advanced manufacturing hub,” Rosty said.

Rosty said advanced manufacturing is a key industry in Denver, and the bottling plant will provide 475 jobs, with 250 moving from Pepsi’s existing facility in RiNo. Some of that facility’s jobs are also moving to a large warehouse that Pepsi has leased in Adams County, according to city documents.

The incentive proposal will be heard in the City Council’s Business, Arts, Workforce, & Aviation Services Committee on Wednesday. In order to be paid the $1 million, Pepsi must demonstrate the facility is up and running and that it is engaged in workforce development.

Denver estimates the bottling plant will generate $6 million for the city in the first five years and reach $11 million over a 10-year period, based on all taxes applied to its operations.

Ashley Blua, a spokeswoman with PepsiCo, declined to comment when asked Friday about the incentive, saying the company is still speaking with current employees about the proposed new facility.

The proposed site of the plant is north of High Point Boulevard, east of Argonne Street, south of the RTD A Line commuter rail track, and west of the future Himalaya Street easement.

As BusinessDen previously reported, the land for the facility is currently owned by Glendale-based Westside Investment Partners, led by Andrew Klein. The firm also owns the former Loretto Heights campus in southwest Denver, as well as the former Park Hill Golf Course.

This rendering shows the potential design of a roughly 1.1 million-square-foot bottling plant Pepsi plans to build near DIA. (Courtesy of the city of Denver)

The $400 million, 1.1 million-square-foot facility on 150 acres would replace the company’s existing bottling plant in RiNo, which it put up for sale last year.