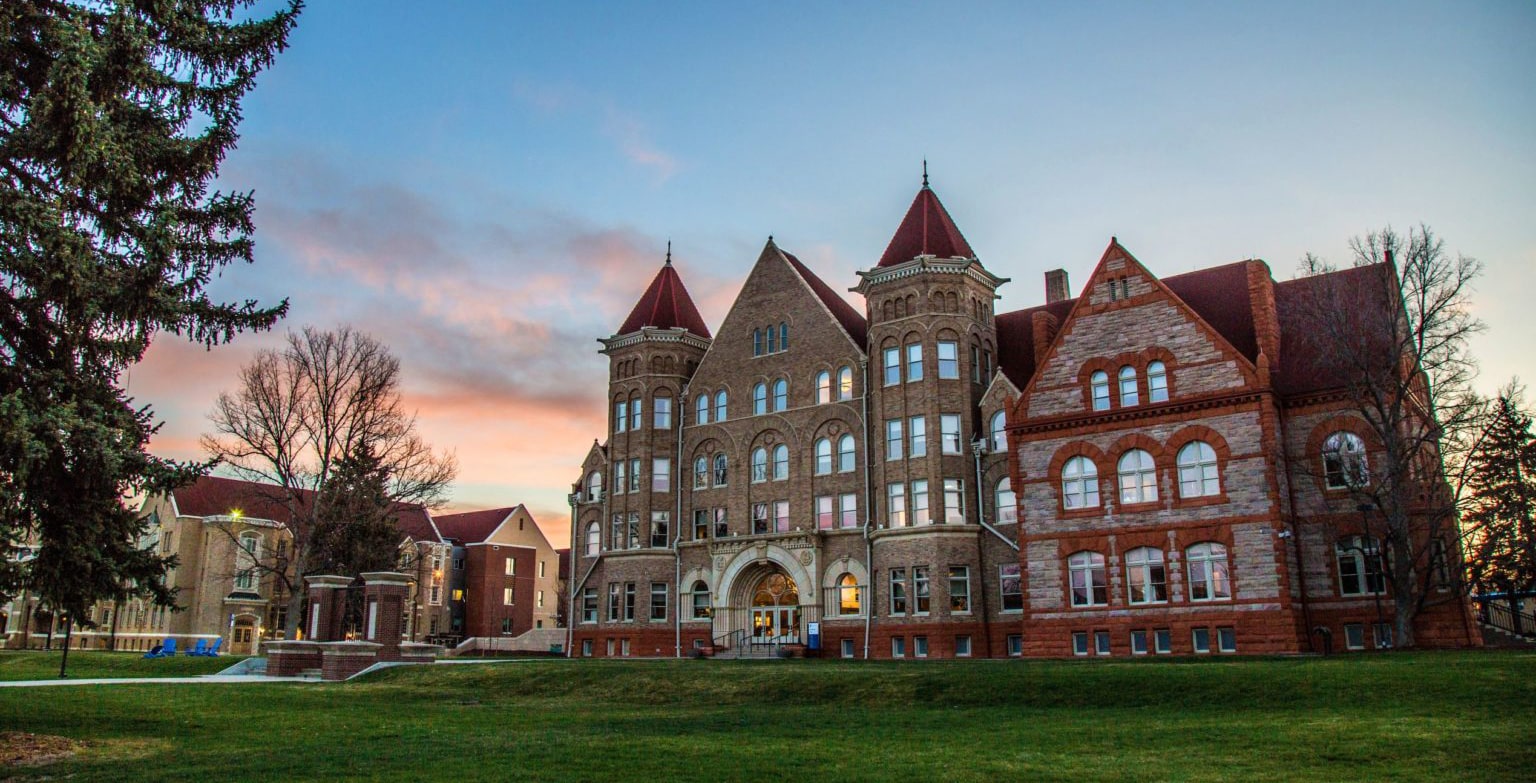 Centennial Hall, one of 13 buildings on the Johnson & Wales University campus in Denver, dates to 1886 and is on the National Register of Historic Places. (BusinessDen file)

The next chapter of the former Denver campus of Johnson & Wales University has begun.

Denver-based nonprofit Urban Land Conservancy closed on the purchase of the 13-building, 25-acre campus at 7150 Montview Blvd. in South Park Hill on Tuesday.

ULC President and CEO Aaron Miripol told BusinessDen the organization — which has users lined up for every structure — paid approximately $62 million.

That transaction was the first of a three-part deal, which saw ULC immediately resell portions of the campus to Denver Public Schools and the Denver Housing Authority, while retaining ownership of the remainder.

“To me, this is an amazing opportunity,” Miripol said.

Rhode Island-based Johnson & Wales welcomed its first Denver class in 2000, taking over what had previously been home to Colorado Women’s College and the University of Denver Law School.

The private nonprofit institution, which paid about $30.5 million combined for the property in 1999 and 2003, announced last summer that the Denver campus would close, along with one in Florida. The school tapped CBRE to market the property, saying it wanted a buyer who would “implement the highest and best use of the property so both the university and the community will benefit.”

BusinessDen broke the news in April that ULC was under contract. The organization says it “intervenes in the metro-area real estate market on behalf of low-income, disadvantaged communities,” generally by helping to facilitate the development of income-restricted housing and office space for nonprofits. 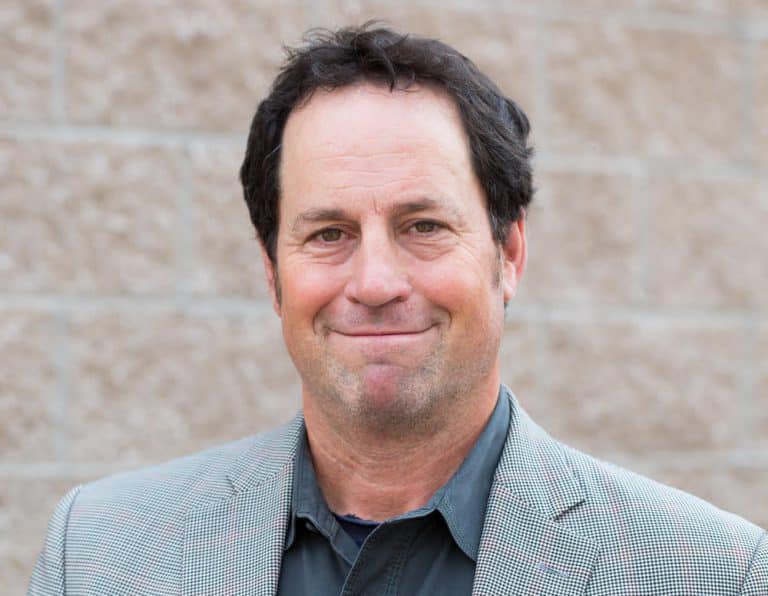 Initial offer for campus was $50M

The campus is across the street from the system’s Denver School of the Arts, led by Principal Anthony McWright. When he heard the campus was for sale, he saw it as a way to serve more students.

“He talked to other folks at DPS, and then DPS talked to ULC last October, three weeks before offers were due,” Miropol said.

Miropol said he previously had mentioned that the campus was for sale to the ULC’s board, but the organization hadn’t been planning to make a bid.

“I think we both felt we had enough other things going on … and honestly I didn’t think we could compete,” he said.

Miripol said he believes there were about half a dozen other offers. ULC’s bid was one of three that made it to the final round, along with those submitted by two developers, one based locally and one out of Chicago, he said.

“I think our final offer was still probably lower than the other two,” he said.

Miripol said he thinks Johnson & Wales liked “our commitment to the preservation of the campus.” But the biggest factor, he said, was likely timing. The university wanted to close on the sale right after ceasing operations, he said, and ULC was willing to make that happen.

So, on Tuesday, there were essentially three closings. 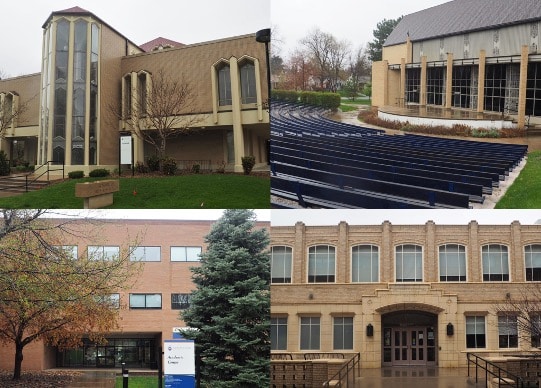 The buildings on the campus of Johnson & Wales University that Denver Public Schools is buying are, clockwise from top left, Aspen Hall, Whatley Chapel, Wildcat Center and Academic Center.

Second, DPS paid $30 million for the western portion of the campus, which includes four buildings. The system expects to make it part of Denver School of the Arts starting with the 2022-2023 school year, after undertaking renovations.

And third, DHA purchased the south portion of the campus, which includes two former dormitory buildings, Triangolo Hall and Gaebe Hall. A resolution approved by DHA’s board in January stated it would pay up to $9.5 million, and seek to repurpose the buildings to provide housing, while exploring the possibility for development of additional structures on the surrounding land.

Those sales leave ULC with ownership of the east side of the campus and its seven structures, including Centennial Hall, which dates to 1886. The organization said it holds the land in a 99-year ground lease that commits it to community-serving uses.

ULC has already lined up users for each of the structures.

Centennial Hall will be leased by St. Elizabeth’s School, an Episcopal school for kindergarten through eighth grade that says it uses “sliding scale tuition in order to remove the financial barrier to a high quality education.” The school, which has been at 2350 Gaylord St., plans to open in its new location this August, according to ULC.

Miripol said ULC plans to hold community meetings in the coming months to discuss plans for the open space and ensure the campus can “remain a community asset.”

“We don’t want this to be something that’s off-limits,” he said.

Miripol praised the condition of the property, saying he has documentation showing that Johnson & Wales spent $43 million on capital improvements over the last five years. A sizable portion of that was spent on Centennial Hall, which had been shuttered for 30 years before Johnson & Wales reopened it in 2015, saying it had spent $17 million on renovations.

Going further back, Miripol said he estimates Johnson & Wales spent $100 million on improvements since buying the campus two decades ago, not counting the initial purchase price.

“This is the nicest by far real estate transaction I’ve ever been part of, in terms of the condition of the property,” he said.

Centennial Hall, one of 13 buildings on the Johnson & Wales University campus in Denver, dates to 1886 and is on the National Register of Historic Places. (BusinessDen file)