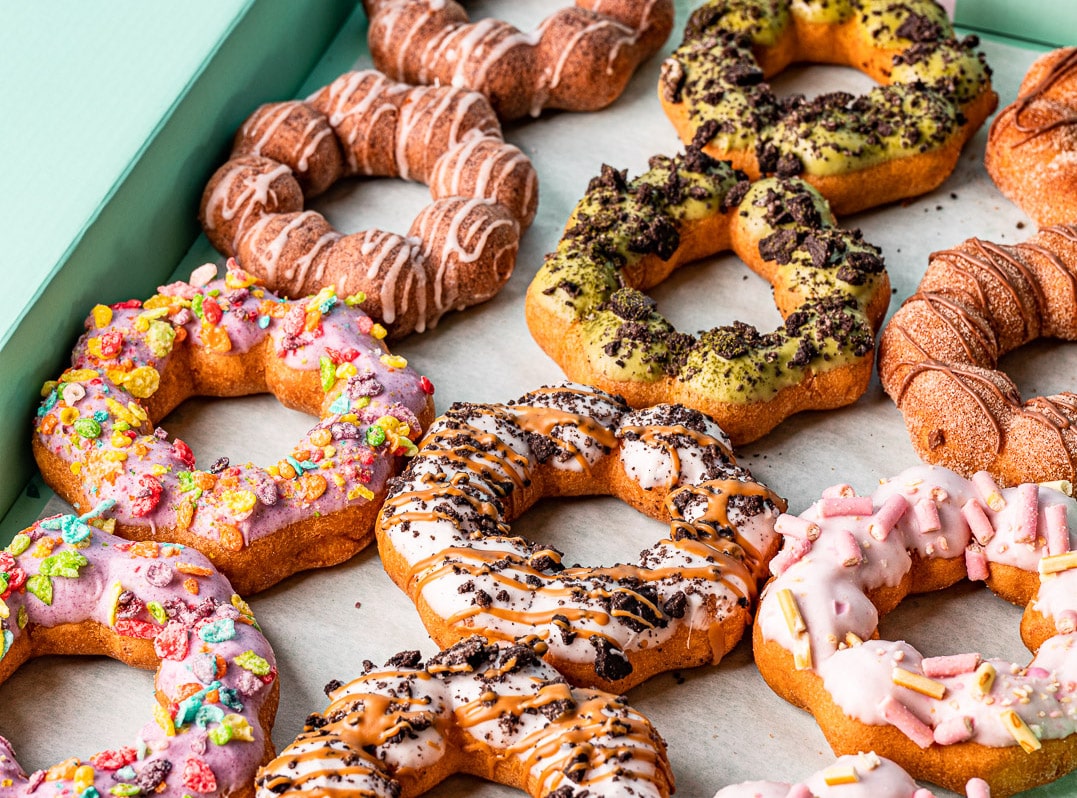 Dochi, which specializes in Japanese mochi donuts, plans to open its RiNo store next month. (Courtesy of Dochi)

A new type of donut is rising in Denver.

Dochi, an Orlando-based donut shop that specializes in Japanese mochi donuts, is getting ready to open its first Colorado location in RiNo next month.

“Most people don’t know what a mochi donut is, so our goal is to give everyone a chance to try it,” said co-founder Jason Le.

Dochi will be at 2449 Larimer St., where Hi Tide poke shop operated before closing in October. An official opening date has not been set, but the shop expects to open daily at 11 a.m. — yes, don’t plan on grabbing donuts for breakfast — and close between 3 p.m. and 6 p.m. depending on the day.

Le started Dochi as a pop-up with his childhood friend Frank Phan, who used to own a donut shop, in 2018. Le worked for JetBlue, and through his travels to Japan, he fell in love with the mochi donut, but could never find one in Florida.

The RiNo location will be the brand’s fifth, joining two in Orlando and two in Seattle.

“I’m not a big donut person. But when I tried a mochi donut, I’m pretty sure I had one every day after that when I was visiting,” Le said. “The texture is chewier, softer, airier with a soft crisp on the outside. And it’s not too sweet. So, unlike a typical donut, where you can only eat one or two, this donut is easy to snack on.”

Mochi donuts are made with sweet rice flour, and typically contain half the amount of calories as the standard cake or yeast donut. The sweet treat’s unique shape resembles a “baby teething ring,” meant to be broken apart and shared.

Dochi’s new shop will serve bi-weekly rotating flavors as well as core popular flavors that have gained Dochi a loyal following, including the Ube Glaze, which is made from a sweet purple yam, and the Japanese-inspired Matcha Oreo. It will also offer coffee and Japanese-inspired drinks, like Uzo lemonade.

Le has brought on two part-owners to help run the business, Jennie Nguyen and her husband Johnny, who are Denver natives and longtime friends of Le. Jennie previously worked as a dental hygienist but decided to quit her job and help Le full-time when she heard he was expanding.

“When I found out Jason was opening his first location in Orlando, we flew out to support him, tried the donuts and loved them,” Jennie said. “Every time we go to visit Orlando or Seattle our friends and family beg us to bring them back a box of donuts, so we thought this would be the perfect opportunity to introduce them to Denver.”

The group of owners subleased the 1,100-square-foot space from Hi Tide last November and decided to wait until COVID vaccines were widely distributed to get ready for the opening.

Eventually, Le and the Nguyens hope to grow Dochi throughout Denver.

“Every time I visit Denver, I always fall in love with it,” Le said. “I love the friendliness of the people, and one day, I’ll probably move here.”

Third Culture Bakery, known for its matcha drinks and mochi muffins, is also opening its second Colorado location at 2500 Lawrence St., Unit 200, within the S*Park development on the edge of RiNo this weekend.

Dochi, which specializes in Japanese mochi donuts, plans to open its RiNo store next month. (Courtesy of Dochi)

“The texture is chewier, softer, airier with a soft crisp on the outside,” said the co-founder of Dochi, which already operates in Seattle and Orlando.