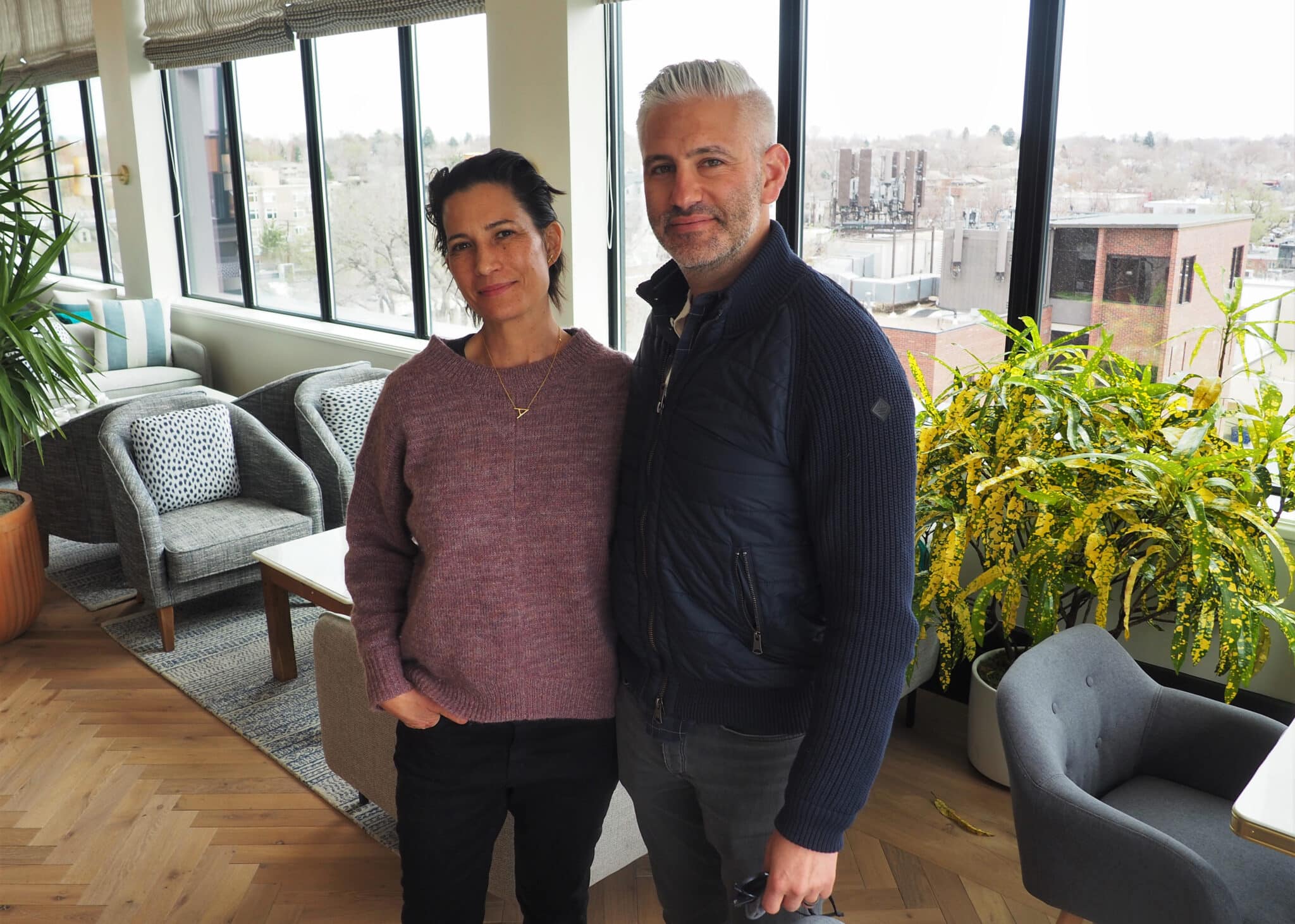 Matt Joblon has developed hotels in Cherry Creek before.

The CEO of Denver-based BMC Investments, which has developed almost exclusively in Cherry Creek — including its Halcyon and Moxy hotels — is gearing up for the May 6 launch of Clayton Members Club & Hotel.

The property at 233 Clayton St., fashioned from the former Inn at Cherry Creek building, has 63 rooms for guests staying overnight. But the upper floors also feature multiple restaurants and bars, and rooms set aside for socializing and yet-to-be-announced programming.

That’s the space set aside for the people who opt to pay $3,000 a year to join the members club. And that’s the side of the business that Joblon is excited to talk about.

“We want to bring in all different types of people, different backgrounds and perspectives,” Joblon said. “We want to create a space where you can be your absolute authentic self with zero judgement. And you can get great food, drinks and experiences. You tie it all together and I think it can be really fun.”

The most prominent name in the industry that Clayton joins is SoHo House.

The London-based firm, founded in 1995, has dozens of locations in major cities around the world, from New York to Toronto to Hong Kong.

Clayton has no affiliation with the company. But it’s similar to SoHo’s locations in many ways, from the general pricing range (with discounts for younger adults) to the rules (no photography inside) to the fact the club is paired with a hotel. And Clayton’s membership director, Rachel Smith, used to work for SoHo.

If SoHo wanted to come to Denver, Joblon likely had the connections to be involved. His brother, he noted, is developing the company’s Austin location, slated to open later this year.

SoHo didn’t respond to a request for comment on why it hasn’t expanded to Denver. Joblon, however, attributed that to SoHo’s focus on what the company considers “the creative class.”

“They frankly didn’t think Denver had a deep enough creative class yet,” he said.

Joblon said Clayton wants members from a broader sphere, which he thinks of as three categories: creative leaders, social leaders and business leaders. 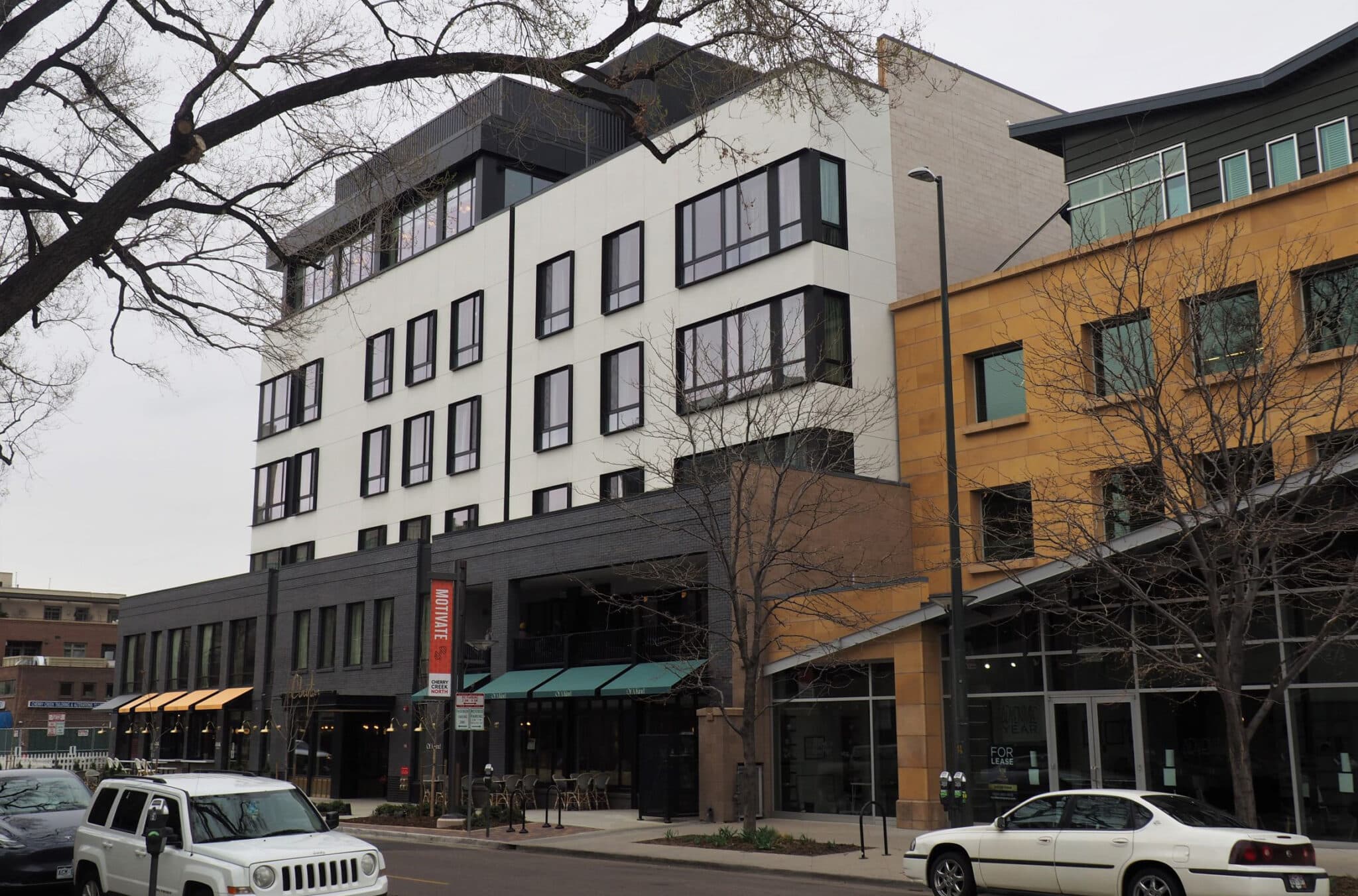 Don’t call it the country club

SoHo didn’t invent the idea of a members-only club, either.

There are country clubs, of course. No interest in golf? The University Club in Uptown dates to 1891, features a fine-dining venue and bills itself as being for those with “a shared enthusiasm for social, intellectual and philanthropic engagement.”

Clayton isn’t even the only members club launching in Denver at the moment. Chicago-based The X Company has opened a massive apartment complex in Union Station North, and is marketing memberships for $275 a month to those who don’t want to move in, but want access to the building’s coworking space, restaurant and rooftop pool. Members have to be 45 or younger.

Additionally, if you consider a high-end gym with a passionate following to be a sort of members club, then there’s another coming to Cherry Creek. Equinox is preparing to take space a couple blocks away, in another building that Joblon is developing.

Still, Joblon and Smith said the city “has no reference” when it comes to what Clayton will be, meaning education has been an important part of launching. 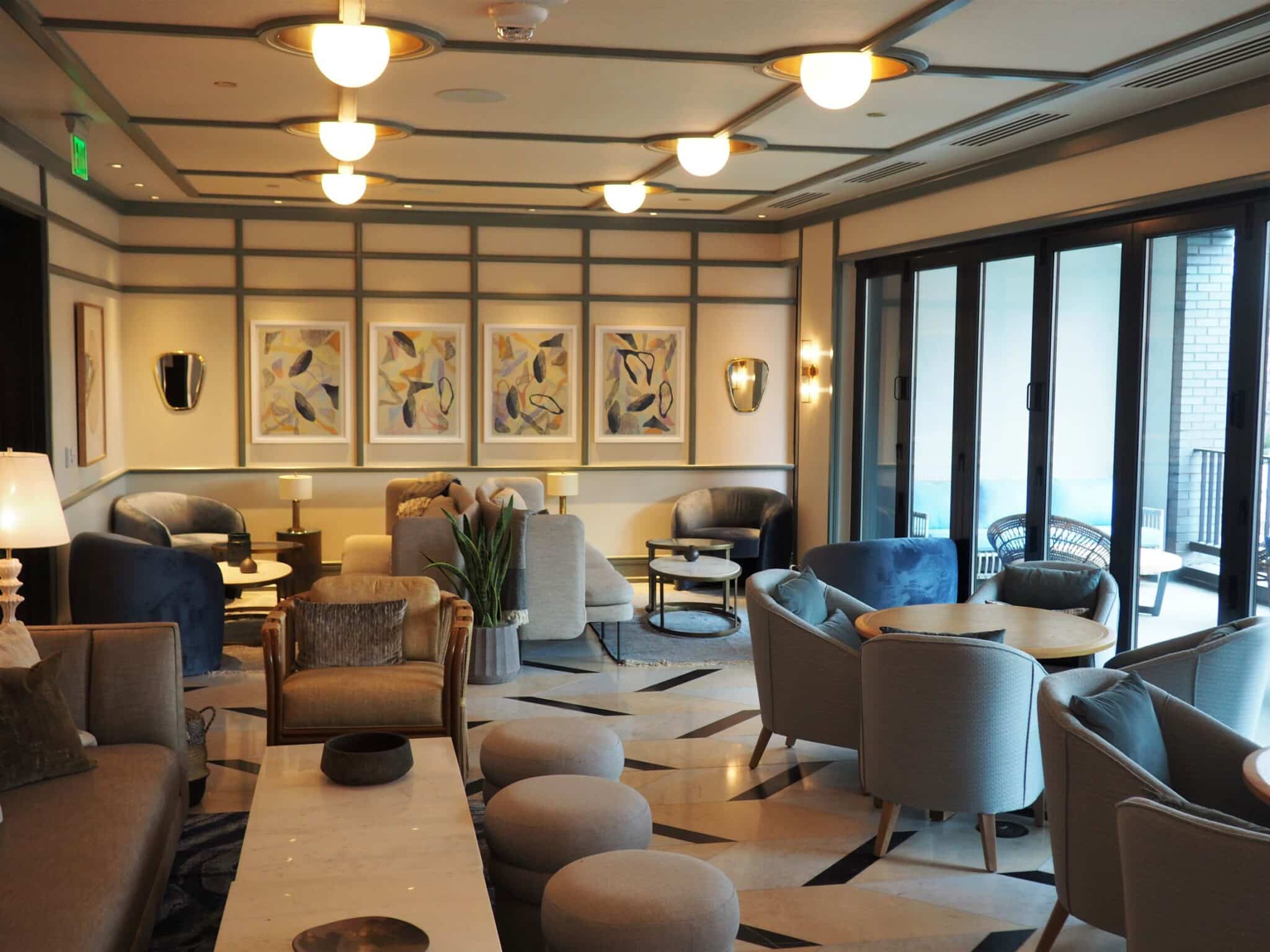 The sunroom on the building’s second floor.

Clayton has seven restaurants and/or bars. Three are on the building’s ground floor, which is open to the public:

O.A.K. Market opened at the end of last week, and Of A Kind will open in late April, ahead of the early May unveiling of the hotel and club component. Five Nines is expected to open in June.

The public can’t go past the first floor unless they’re a member of the club or accompanying one, or they have a hotel reservation.

Chicago-based Aparium Hotel Group will operate the hotel, and Rich Warnick. 4240 Architecture was the project architect. Haselden Construction was the general contractor.

On the second floor, where there’s a library and space where members can sit and work, there’s a bar and restaurant in adjacent rooms. On the top floor, another restaurant features a wood-burning oven, so menu items will include flatbreads and whole grilled fish. Just outside, there’s a final bar by the small pool, surrounded by daybeds that members can book.

The building also has a gym. And a range of programming, from fitness classes to lectures, will aim to prompt members to stop by.

“We want members to want to spend all day,” Smith said.

Face-to-face interaction is encouraged. On the second floors, there’s only one room where members are allowed to talk on their phones. And yes, no photos.

“We want people to come here, relax, be who they are,” Smith said. 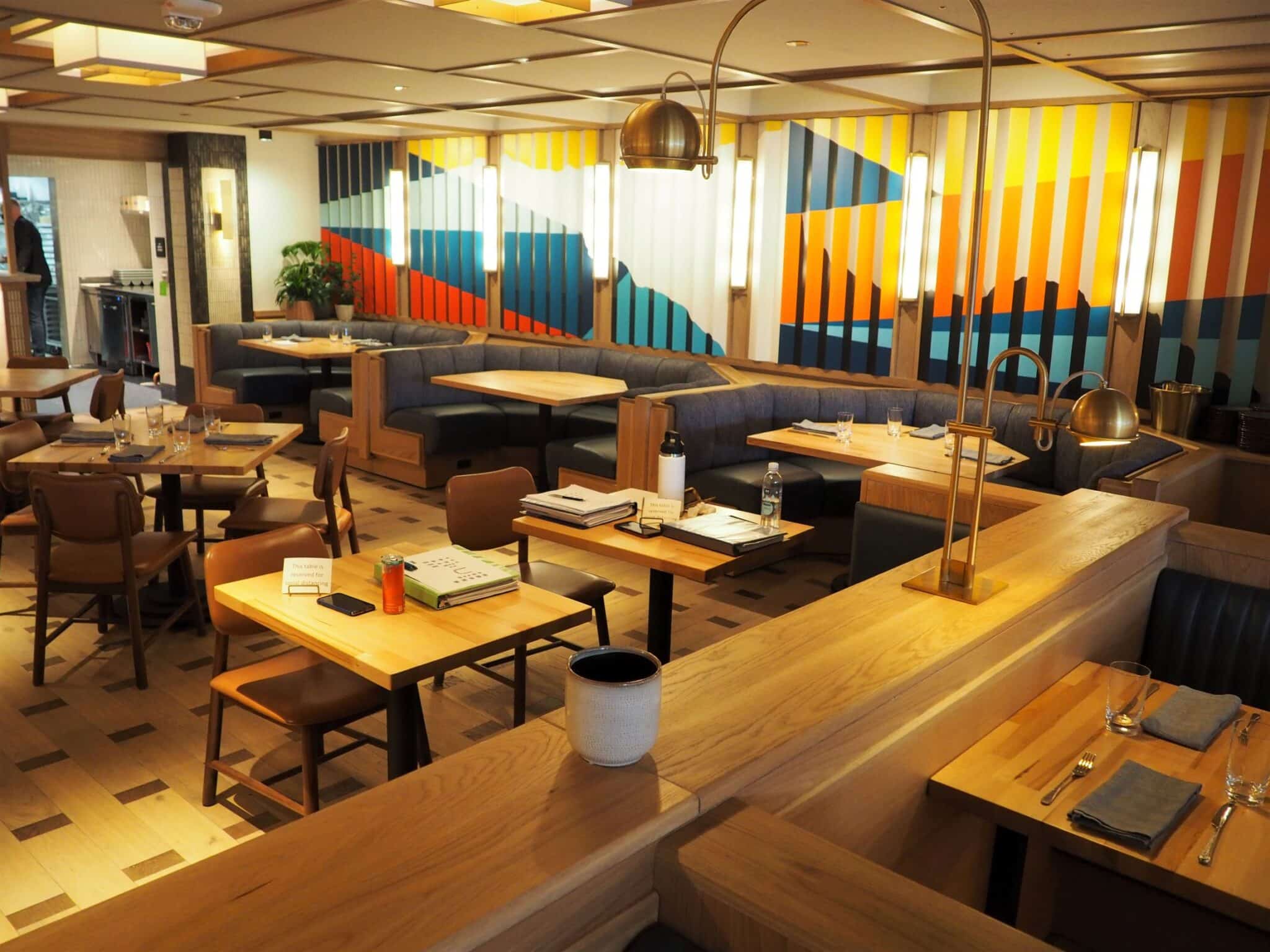 The interior in Of A Kind, the fine-dining restaurant on the building’s first floor.

Membership committee of 40 decides who gets in

The club already has members.

Joblon and Smith said that, about a year ago, they finalized the club’s membership committee, which has 40 members.

“That’s really the organic way to build the membership from the ground up,” Joblon said.

Additionally, the club has also offered free or discounted membership to those who have donated art, or whose products are being used or sold at the building.

Only in recent weeks has the club posted its membership application online, allowing those without an invite to apply. The form asks about half a dozen questions, from “What does generosity mean to you?” to “What was the last new thing you tried?”

It does not ask about the applicant’s finances, although it notes those accepted pay $3,000 a year, or $1,800 if they’re under 30 years old. It’s half price if the applicant’s spouse is already a member. There’s an additional $500 “joining fee,” although it’s half that if you pay annually rather than monthly.

That gets you access to the building. The food and drink are extra, as are the hotel rooms.

As applications come in, the membership committee will meet quarterly to decide who makes the cut — and who just stays in limbo.

“Nobody is ever denied, rejected,” Smith said. “They’re just put on a wait list. Perpetually. And the membership committee will review periodically.”

Smith declined to disclose how many members the club will open with, and said she’ll likely never release a figure. Joblon said clubs typically have 3,000 to 5,000 members, but that the size of a club depends on many factors, including how often members come in.

“We will have members that don’t ever come here,” he said. “They just want to be a member, they come here one time a year. That opens up the opportunity to have another member that comes here more often. We’re going to consider quarter by quarter.”

The wait list is something of a point of pride.

“Our initial number, we’ve hit for membership and now we’re building the wait list. By the time we open up May 6, it’ll be a substantial wait list,” Joblon said. “Substantial.” 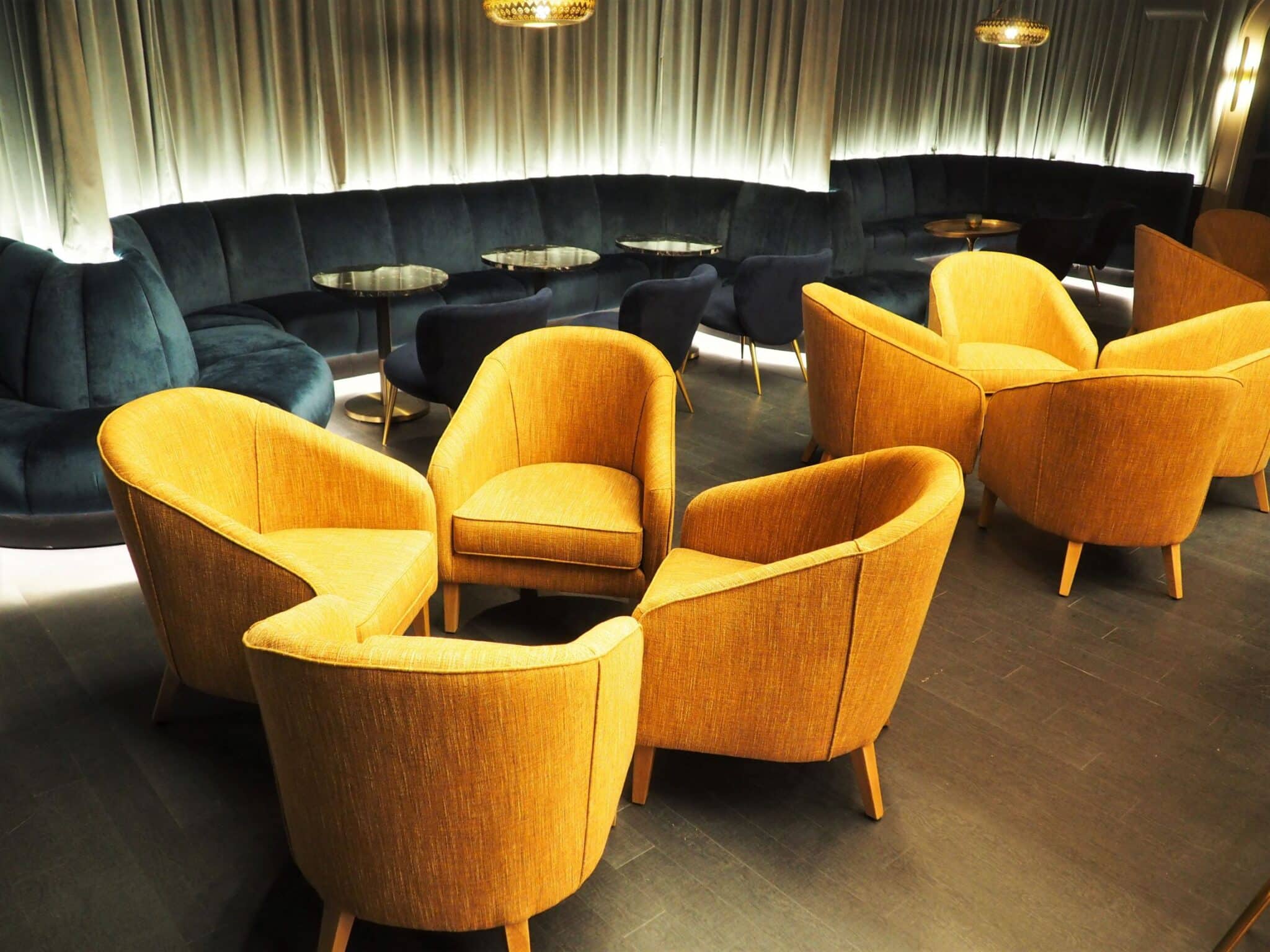 The interior of Five Nines, the lounge on the building’s first floor.

An exclusive club that aims to be the opposite

Members clubs are, by definition, exclusive. Yet Joblon and Smith also emphasize that the club wants to be the literal opposite of that word — inclusive.

Applicants are asked to note that they agree with an eight-sentence pledge that states the club is “seeking out and breaking down barriers that exist in the private club industry” and that racism and bullying won’t be tolerated, among other things.

Denver “is a very segregated city,” Joblon said. And he doesn’t deny that Cherry Creek, where Clayton is located, is far wealthier and whiter than the city as a whole. But he said the club’s location doesn’t challenge its goal of gaining a diverse range of members.

“Unbelievably, it turned into our biggest asset,” Joblon said. “And the reason is, because we did it here, and we are opening our arms to all parts of the community, people are actually more excited about that and buying into that because we’re forcing more change here than we could anywhere else in the city.”

Half of the club’s membership committee is female, Joblon and Smith said.

“This is not like the country club, and this is not my group of friends,” Joblon said, noting he is not on the committee. “I know less than 10 percent of the members that have been accepted.”

Joblon and Smith said the club is also giving free or reduced memberships, primarily to artists or those with a skill the club needs — think a fitness instructor willing to teach classes — and to those it sees as doing good in the community.

The CEO of Denver-based BMC Investments has developed hotels in Cherry Creek before. But not one like this.