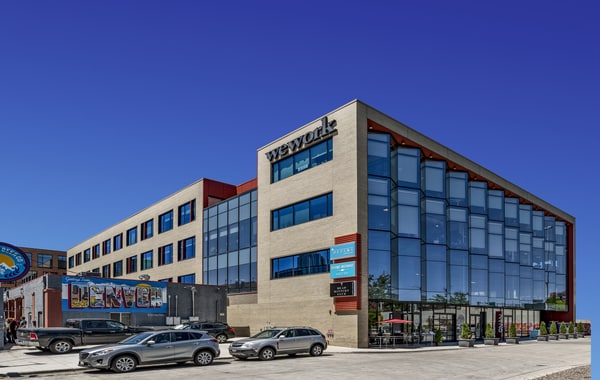 WeWork is closing four Denver locations, including one in The Lab building at 2420 17th St. (BusinessDen file)

One of the four Denver WeWork locations that the company closed at the end of February is being marketed for lease.

Cushman & Wakefield has the listing for the top two floors — about 50,000 square feet — in The Lab building at 2420 17th St. in Denver, just off Platte Street. CoStar lists the asking price as $35 a square foot on a triple-net lease.

A broker marketing the floors, which feature dozens of small offices, did not respond to a request for comment. WeWork declined to comment.

The Lab building is owned by an LLC affiliated with New York-based asset manager BlackRock, which bought it in 2018.

New York-based WeWork also closed locations in February at The Vault at 821 17th St., The Hub at 3601 Walnut St. and Civic Center Plaza at 1560 N. Broadway. As of Wednesday, those spaces — about 180,000 square feet across the three buildings — were not listed on CoStar as available.

In addition to the locations that it closed, WeWork has previously backed out of two signed leases at buildings where it never opened — Rev360 at 3600 Brighton Blvd. and 1660 Lincoln St. downtown.

WeWork also signed for the entire building at 2323 Delgany St., although the landlord terminated the lease earlier this year, saying in court filings that the company wasn’t paying rent. Two lawsuits have since been filed, the most recent just last week.

WeWork continues to operate five locations in Denver, including one in the Circa building along Platte Street.

WeWork is closing four Denver locations, including one in The Lab building at 2420 17th St. (BusinessDen file)