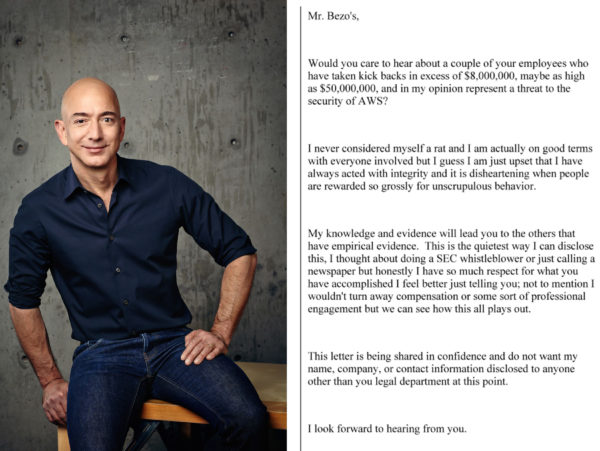 “Would you care to hear about a couple of your employees who have taken kick backs in excess of $8,000,000, maybe as high as $50,000,000, and in my opinion represent a threat to the security of AWS?” the email began, using an acronym for “Amazon Web Services.”

The writer didn’t go into the details, but offered to provide a roadmap.

“My knowledge and evidence will lead you to the others that have empirical evidence,” the writer said. “This is the quietest way I can disclose this, I thought about doing a SEC whistleblower or just calling a newspaper but honestly I have so much respect for what you have accomplished I feel better just telling you.”

In court documents, Amazon has said the email is the first thing that alerted it to what the company has called “a significant fraud and kickback scheme” involving Denver-based real estate firm Northstar Commercial Partners.

The immediate reaction to the writer’s email within Amazon remains unclear. But in April, the FBI served a search warrant at the home of Northstar CEO Brian Watson — the 2018 Republican nominee for Colorado state treasurer — and asked Amazon-related questions. Weeks later, Amazon sued Northstar. Through an attorney, Watson has denied wrongdoing, saying Amazon is misinterpreting arrangements common in commercial real estate.

The Dec. 2 email to Jeff Bezos, which was signed, was six sentences. And the second to last dealt with the writer’s identity.

“This letter is being shared in confidence and do not want my name, company, or contact information disclosed to anyone other than you legal department at this point,” the writer said.

Amazon has complied with that request. In connection with its lawsuit against Northstar, it submitted the email as an exhibit in court. But it blacked out the writer’s email signature, and the account from which the email was sent.

Carleton Nelson, however, is looking to uncloak the mystery individual.

Nelson, a Seattle resident, is one of two ex-Amazon employees that the company alleges received kickbacks from Northstar in exchange for striking real estate deals with the firm. He and former colleague Casey Kirschner are named as defendants in Amazon’s lawsuit against Northstar.

In court documents, Amazon has scrutinized nine northern Virginia data center lease deals made with Northstar, as well as a sale of land in the area to Amazon by an entity involving Northstar employees. Amazon has also highlighted another Virginia land sale that Watson’s attorney has said does not involve Northstar.

Amazon fired Nelson for unspecified “ethics violations” in June 2019, months before the email to Bezos. Kirschner was fired on April 2, according to court documents.

On Oct. 30, Nelson filed a motion in the ongoing lawsuit asking the court to order Amazon to unredact the name of the individual who emailed Bezos on Dec. 2.

Nelson, along with other defendants in the case, has filed separate motions asking the court to dismiss Amazon’s lawsuit. He argues the identity of the emailer may have “significant implications” for that effort.

While Watson did not request the unredaction, his attorney, Stan Garnett of Brownstein Hyatt, said Wednesday that he will not object to Nelson’s motion.

The individual who sent the email to Bezos has retained their own attorney. 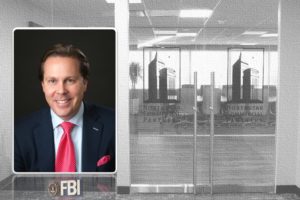 Kevin B. Bedell, of McLean, Virginia, said in a Nov. 10 court filing that his client wants to remain anonymous because “he/she has reasonable concerns for both his/her personal safety, and for his/her current business activities.”

Bedell, who did not respond to a request for comment Wednesday, wrote the anonymous individual worked closely with Watson for several years and considers him a “narcissistic sociopath.”

“Mr. Watson is very calculating, and extremely controlling,” the document submitted by Bedell states. “He demonstrated deceitfulness, callousness, hostility, irresponsibility, and a lack of empathy. The author observed that Mr. Watson would never admit that he did anything wrong, and would never take responsibility for anything that went wrong. Instead, he would blame everyone else. The author observed Mr. Watson act impulsively, rashly, and make snap judgments when he got upset.”

Bedell also points to an email sent by Watson to family members and business associates after the FBI served its warrant in April.

BusinessDen previously disclosed portions of that email. But Bedell highlights the fact that Watson also said in the email that he planned to kill himself, going so far as to say he would use a rifle “as I don’t want gun control activists to blame a handgun and cause more problems for law abiding citizens.”

Watson ultimately did not follow through with that threat.

But Bedell writes that the emailer “justifiably has concerns about what Mr. Watson might do to the author if the author’s identity were known.”

Garnett, Watson’s attorney, told BusinessDen that Watson’s April email “has been mischaracterized and used by Amazon and other litigants in the case in a way that’s very unfair and unfortunate.”

“Brian Watson is not a threatening individual,” Garnett said.

Bedell also argues that Kirschner has said things that could be taken as threats, and that, more generally, individuals who lost jobs or income as a result of the email to Bezos could opt to “blame the messenger.”

“I never considered myself a rat,” emailer told Bezos

A second individual provided information to Amazon about the alleged scheme.

Prior to suing Northstar, the company also learned details from Tim Lorman, Northstar’s chief operating officer from March 2019 until April 7.

According to court documents, on Jan. 24, Lorman asked an executive with IPI, a partner with Northstar on the Amazon deals, to meet in person. The two met in Chicago on Jan. 28, and Lorman shared documents that IPI subsequently shared with Amazon.

IPI subsequently ousted Northstar from its role in the Amazon deals.

The initial email to Bezos, however, preceded Lorman’s discussion by nearly two months.

In the email, the writer said they “wouldn’t turn away compensation or some sort of professional engagement.” But they suggested a broader frustration was their predominant reason for hitting send.

“I never considered myself a rat and I am actually on good terms with everyone involved but I guess I am just upset that I have always acted with integrity and it is disheartening when people are rewarded so grossly for unscrupulous behavior,” they wrote.