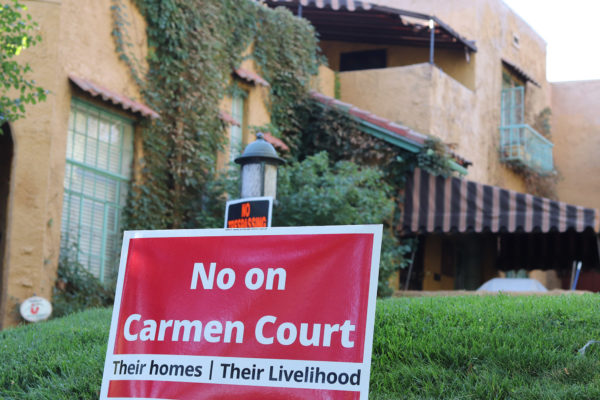 Those hoping to save Carmen Court have yet to find their white knight.

Katie Sisk, who owns one of the six units in the 95-year-old condo complex at 900 E. 1st Ave., said Wednesday that no alternative buyer has been found for the property.

“Given that we’ve not had anybody, I unfortunately don’t anticipate there being one,” she said.

The matter is slated to go back before a Denver City Council committee — which had hoped a compromise could be found — next week.

Sisk and the owners of the other units want to sell their property to Houston-based developer Hines, which plans to demolish the structure and build a senior living complex on the property, as well as adjacent parcels.

When the Carmen Court owners applied in March for a certificate of demolition eligibility, which makes it easy to demolish a structure within five years, several community members responded by asking the city to designate the building a landmark.

Landmark designation would effectively prevent demolition of the structure, and would scuttle the sale to Hines, which has said it doesn’t see a way to build what it wants without demolishing the condo complex.

The City Council makes the final decision on landmark applications. In early September, a council committee pushed back the vote on the Carmen Court application, in the hopes that the landmark applicants and the condo owners could find some alternative resolution.

Hines, for its part, has indicated that there’s one compromise it’s interested in. If another buyer can be found that wants to preserve the structure while paying the same price that Hines has agreed to pay, the company will assign its contract to the new buyer and walk away. Hines also wants to be reimbursed for the expenses it’s incurred, not counting staff time.

The amount that Hines has agreed to pay has not been made public, but the Carmen Court property was listed for $5.5 million.

“My knowledge is that we do not have someone to date that is able to step in,” Sisk said. “I do know that there are people who have been approached.”

Annie Levinsky, the executive director of Historic Denver, a preservation advocacy organization that has helped approach potential buyers, said that while no alternative buyer has been found, she still retains some optimism.

“I do still hold out a little bit of hope,” she said Wednesday.

Lisa Purdy, who is involved in the push for landmark status, said the lack of an alternative buyer is “not the fault of us trying — it’s the fault of the terms.” She said what Hines has asked for is “pretty challenging,” given that most people would put a higher monetary value on the land that Carmen Court sits on than on the structure itself.

“I like to say I have a beat-up bike,” Purdy said. “And I can put a price of a million dollars on it. And if it doesn’t sell, whose fault is that?”

A vote of the full council is slated for early November. But Sisk said that, if the delay period ends with no alternative buyer having been found, she hopes that the landmark applicants will rescind their application, rather than forcing a vote.

“This has been on the table for quite a long time,” she said of compromise efforts.

Purdy, whose husband Malcolm Murray is one of the three applicants, said she doesn’t think withdrawal will happen.

“From our perspective, we’re trying to do something that’s important for the cultural history of Denver … Council may decide it’s not worth it, and that’s their prerogative,” she said. “It will make us sad.”

“Given that we’ve not had anybody, I unfortunately don’t anticipate there being one,” said Katie Sisk, who owns one of the six condos at 900 E. 1st Ave.

“I like to say I have a beat-up bike,” Purdy said. “And I can put a price of a million dollars on it. And if it doesn’t sell, whose fault is that?”

This is such a false analogy. A better analogy would be:

“I have a beat-up bike, but it happens to be made out of gold. The market value of the gold is 1 million dollars, and I have an offer for that amount. However, the buyer is going to melt down the bike to make use of the gold. And now a third party with no ownership interest intends to block the sale of my property because they like the way the beat-up bike looks.”