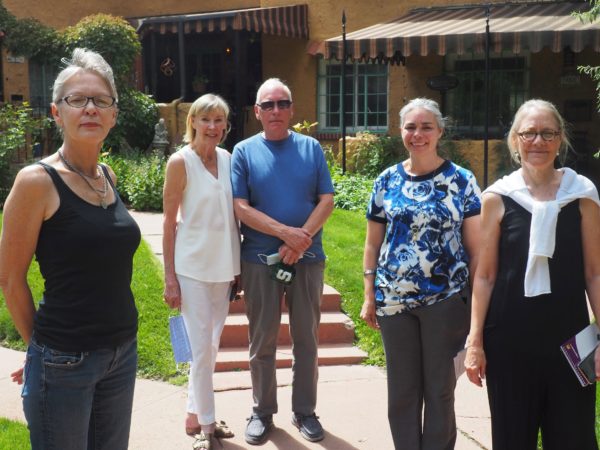 The owners of the six units within Carmen Court, a small condominium complex off Speer Boulevard, say they voted unanimously three years ago to put their entire property up for sale.

Now, “we’re in purgatory,” said Gary Laura, one of the six.

Instead, the owners have found themselves in a Tom’s Diner-like situation. They’re under contract to sell their approximately 0.4-acre lot to Houston-based developer Hines, which wants to build a senior living complex on the site at the corner of 1st Avenue and Emerson Street.

But the owners’ April request to the city for non-historic status, which makes it easy to demolish a structure in the near future, instead resulted in a so-called “hostile landmark” application. Other city residents want the building to be named a city landmark, which would effectively prevent demolition and scuttle the deal with Hines.

BusinessDen previously reported on conversations with Hines, as well as organizers of the landmark application. Last month, owners of four of Carmen Court’s units sat down with a reporter in a small courtyard on the property.

The first city entity to consider the landmark application will do so this Tuesday. The Landmark Preservation Commission could vote to forward the application to Denver City Council for consideration. Or it could vote not to, which would allow the sale to Hines to go through.

The owners are coming armed with a 30-page report prepared by Portland, Oregon-based Heritage Consulting Group, which argues that the structure does not meet any of the criteria for landmark status. 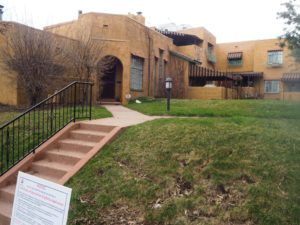 Katie Sisk, 41, has owned a unit in Carmen Court for 10 years. She said the owners want to sell because “the deferred maintenance, the upkeep costs, are exorbitant.”

Laura, 71, who has lived with his wife at the complex for 23 years, said the biggest problem is the gunite that covers the building. It’s cracking and falling off — and he said redoing it would likely cost hundreds of thousands of dollars.

“It’s like a rotten apple,” Laura said. “It looks good on the outside, lots of crap on the inside.”

“Everybody just thinks it’s beautiful, and it is,” said 65-year-old Karen Roehl, who has lived at the property for 15 years. “But that’s pretty much their basis to keep it up.”

The landmark application characterized the property as “a significant example of the Pueblo Revival style combined with Spanish Revival or Eclectic architectural embellishments.” But the owners disagreed with that characterization, describing the style as more Mediterranean.

The landmark application also said the building was designed by Burt L. Rhoads, who qualifies as “a recognized architect or master builder.” The owners said Rhoads did not identify as an architect, and was not licensed as one.

Laura noted that Hines’ project is consistent with the property’s current zoning, which has been in place for years. It would be shorter than a building across the street.

“This is taking away our investment … We have every right to sell our property, to whomever we want to,” he said.

Sisk provided BusinessDen with a rendering of Hines’ proposed project, which had not previously been made public. 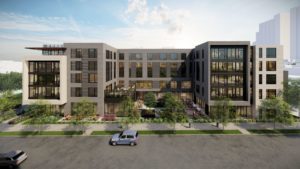 “We’re interested in high-quality product being added to our community,” Sisk said.

The owners interviewed by BusinessDen said they hope the landmark application is struck down on Tuesday. If it does get approved, “we’re stuck,” Sisk said. She said they’ve looked into the tax credits associated with designation, but it still wouldn’t make the building’s needed repairs affordable.

Denver City Council made changes to the landmark application process last year. Notably, in the case of hostile applications, council required mediated conversations between potential applications and property owners before an application could formally be submitted.

Those conversations did happen in the case of Carmen Court. But Sisk said “the process itself needs to be revisited.”

“This is a fairly horrible process,” she said.

Owners of the condo complex off of Speer want to sell their property to a developer. But others want to make their building a city landmark. “The reason they’re saying it’s Pueblo Revival is there’s not a lot of examples of Pueblo Revival,” Laura said. “It’s a manufactured false narrative.”

They don’t care about deferred maintenance. They just want the $1mm that was offered for each of the condo units.

“This is taking away our investment … We have every right to sell our property, to whomever we want to,”

End of discussion. The city council should do the right thing on Tuesday.

Let’s get something in the open, Heritage Consulting Group is a euphemistically named company that specializes in generating weakly-supported reports to counter historic Claims and packs them with boiler-plate drivel.

That said, I wish I had been privy to the mediation. Given the number of doors Hines is proposing, I’m almost certain the owners aren’t getting the amount they could actually demand, but that’s conjecture because the article doesn’t cover either figure.

That said, that delta between the land sale and the pro forma is likely enough to have negotiated some middle ground by memorializing and replacing unique architecture with something that would be similarly significant and possibly alter mass and scale if necessary. As an architect I tend to believe there are physical solutions to physical problems….

But if past is prologue, the structure argument often isn’t about the building at all but about who will be moving in and how many…If that’s the root of the problem then even reasonable solutions will fall on deaf ears and the whole of the community stands to suffer from intractable positions. It’s too bad factions get that way, and all sides do it, because we are better approaching change with open minds and a willingness to compromise to determine a better way forward where no side gets all that they want but both sides get something they can be proud of.

I understand it’s possible that whomever owns 74 Emerson might be against this new project and probably many more in close proximity, but when you live in the city, be prepared because anything can happen. Those corner streets are filled with multi unit dwellings, perfect lot for this project. The people against this sale should buy the property at the price Hines is willing paying and they can do with it whatever they want. They won’t.

“they” say…timing is everything in the real estate world. good for them.

When is the hearing?