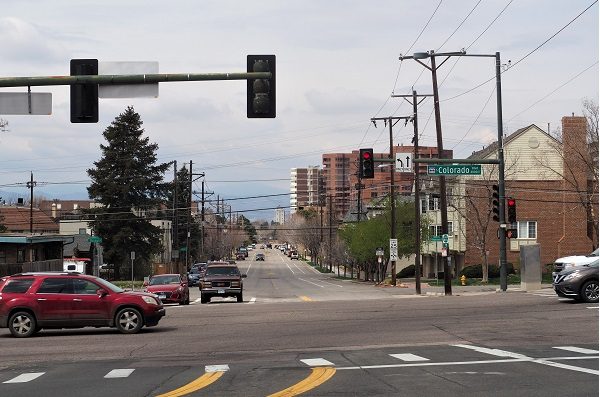 No apartments smaller than 900 square feet. No bicycles on balconies. No medical or dental clinics.

Those are a few of the details in a 67-page “Good Neighbor Agreement” to which the new owner of two eastern gateways into Cherry Creek has committed, as he looks to rezone the languishing properties to facilitate development.

“This is far more comprehensive than most of what we see in terms of development agreements,” Erin Clark, a Denver Planning Board member, said at a meeting last week. “Also, we don’t usually see that they’re already recorded before coming to us for a rezoning request.” 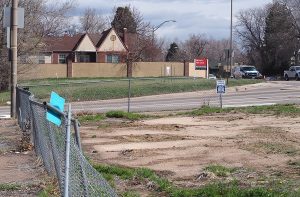 The rezoning is being requested by CC Gateway Owners LLC, an investor group formed by Denver’s McKinnon & Associates, led by Doug McKinnon. The group purchased all but one of the parcels for $5.55 million in April 2019. It’s under contract to purchase the remaining one, 51 N. Colorado Blvd.

The Planning Board voted unanimously to send the rezoning request to the City Council last week.

The current status of the sites doesn’t exactly suggest that they sit on the edge of Cherry Creek, one of Denver’s poshest neighborhoods.

The Colorado Boulevard and 1st Avenue sites are undeveloped, with the exception of a four-unit residential building at 51 N. Colorado.

At Colorado and Bayaud, there’s another four-unit residential building, and some vacant structures, including the former Peeper’s Optical building, unused since 2003. McKinnon told BusinessDen that building is what initially caught his interest.

“I felt it was so anomalous that it sat vacant for so long,” he said, noting the demographics of Cherry Creek.

McKinnon said he learned the other properties were owned by the same buyer, which prompted his 2019 purchase.

“These sites have a dimensional challenge, that the only way we can accommodate the increased public infrastructure that is desired by the neighbors, that we’ve agreed to, is to get a reasonable amount of increased density,” McKinnon told the Planning Board last week. “So that’s the basis for the application.”

McKinnon said he’s also had talks with the city and the Colorado Department of Transportation about redoing the Colorado-1st Avenue intersection, so there’s not a free right turn in and out of 1st Avenue. The current setup poses a challenge to pedestrians, and has become an accident hotspot, he said.

McKinnon has requested G-RO-5 zoning for the other sites. That zoning allows for up to five stories of residential or office use. 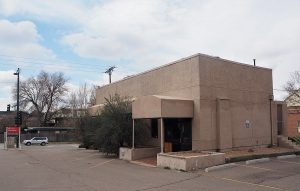 An optical shop once operated in the building at 65 S. Colorado Blvd. (BizDen file photo)

McKinnon, however, doesn’t plan to build five stories. As part of the Good Neighbor Agreement with local neighborhood associations, he’s agreed to only do four stories no higher than 60 feet.

“We recognized that level was too intense a density for the neighbors, so in collaboration with the neighbors we’ve agreed to reduce that through covenant,” he told the Planning Board.

Developers generally strike Good Neighbor Agreements in an effort to get public support from neighborhood organizations as they seek city approvals.

The one drawn up by McKinnon is particularly detailed. According to documents prepared by city staff, it states:

The agreement also includes smaller items like the no-bikes-on-balconies rule and a requirement that trash be stored out of sight. But most notable is the 900-square-foot apartment requirement, which bucks the trend in Denver, where developers have in recent years generally favored smaller units.

At the Planning Board meeting, some members marveled at the extent of the Good Neighbor Agreement.

“Nobody should have to record a 67-page developer’s agreement to get agreement on whether or not something’s acceptable to the neighborhood,” Planning Board member Don Elliott said. “I may regret saying that, but today I’m going to say it.”

Reached by BusinessDen, McKinnon noted that the agreement includes a number of required exhibits, like the legal description of the properties, which adds to the page count. But generally, he said that the city wants to see evidence that developers have made “significant outreach” to neighbors, and the document is the natural byproduct of that process.

McKinnon said he believes the 900-square-foot requirement was requested largely to keep the unit count relatively low, out of a concern over added parking challenges. The agreement mandates that the required parking associated with the buildings be underground, but that parking wouldn’t necessarily accommodate all residents or users of the building.

Similarly, McKinnon said, medical clinics were seen as businesses that have regular traffic in and out, and neighbors wanted to minimize that.

One neighbor who spoke at the meeting indicated 900 square feet wasn’t large enough, saying, “Smaller apartments will greatly impact and change the character of my home neighborhood.”

Planning Board member Ignacio Correa-Ortiz later condemned the comment, calling it “segregationist, in a way.”

“I don’t think that is right,” he said. “It has nothing to do with our criteria. I am going to disregard that comment, but we’re trying to get to a city that is equitable and just and that has a place for everyone.”

McKinnon has also committed to make at least 10 percent of the units income-restricted for 60 years, according to city documents.

The rezoning request now goes to a City Council committee, which can vote to send it to the full body for final consideration.

Developer shares 67-page ‘Good Neighbor Agreement’ requiring apartments to be at least 900 square feet and buildings of no more than four stories.

What is interesting is the varied viewpoints of neighborhood residents i.e. desiring less density and Planning Board members mentioning more density. The lots at 1st Ave and Colorado Blvd are presently G-RH-3 and prior were R-2 which allowed for residential duplexes. Historically the stretch of Colorado Blvd between 7th Avenue Parkway and 1st Ave were to be preserved as residential as a break from the comm. orientation of the rest of Colorado Blvd which used to be of similar design to other Parkways throughout the city. I will not opine on the desired entitlements just wanted to advise the history of those lots. Past redevelopment proposals have included higher density uses i.e. banks and related.

I agree with Ignacio. The 900 sf rule sounds like a thinly veiled dog whistle for keeping poor people out. How does it change the character of the neighborhood if the outside of the building is the same? It doesn’t. And the bicycle/balcony rule…do the residents of the single-family houses in the neighborhood get told that their kid’s bike cannot be left on their front porch? We too often let current residents make decisions for all future residents when that latter group has no ability to speak for themselves.

Mr. Block’s commentary is spot on! It’s. essentially economic racial profiling. The pads are bookended by Hilltop to the East & Cherry Creek to the West, some of the most expensive homes in the entire metro. Why shouldn’t tenants be allowed to keep their bikes on the patios ?? They ABSOLUTELY should, particularly w units that are less than 1K sf. Parking wouldn’t necessarily accommodate all residents or users of the building ?!? Huhh. Than you’ll have problems. Parking in the CC & Hilltop streets. If you want to avoid that issue, & keep patios free, you’ll have FREE parking spaces & storage units for things like bicycles. Otherwise, you can’t dictate to residents that they can’t stow their property (bicycles) on THEIR patios.