Editor’s Note (10 a.m. July 29): An update featuring comments from Councilman Paul Kashmann has been added at the end of the original story.

Council members Robin Kniech and Paul Kashmann did not suggest any sites.

Hancock asked the eight council members — there are 13 in all — to make suggestions on July 8 because the eight signed a letter in April calling for “safe outdoor spaces” where individuals could camp given the coronavirus pandemic.

In his letter, Hancock asked the council members to recommend sites in their own district that are approximately 10,000 square feet, with the idea that the sites would accommodate about 50 tents.

In response to an open records request, the Mayor’s Office said it had received suggestions from CdeBaca, Sandoval, Torres and Hinds.

Additionally, representatives for Gilmore and Ortega told BusinessDen Tuesday that each suggested sites. 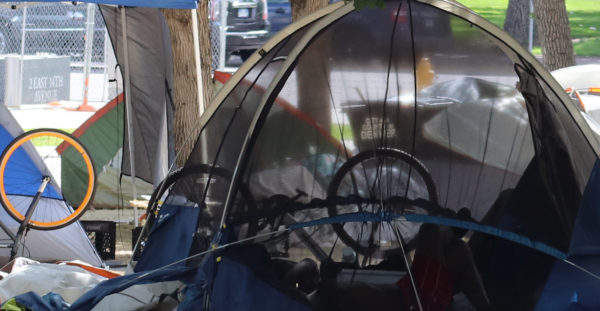 Gilmore, who represents District 11 (northeast Denver), suggested one site, according to a representative: the 61st and Pena Station Park-n-Ride.

Ortega, who is an at-large member, suggested two sites, according to a representative:

CdeBaca was the only council member to suggest a site outside her district. The Park Hill Golf Club, which a developer purchased last year, is in District 8.

The parking lot at 720 Park Avenue West was the sole site suggested twice, by both CdeBaca and Ortega.

BusinessDen reached out to the two council members who opted not to suggest sites. Kashmann did not respond to a request for comment. Kniech said she and others have been working on the issue for months and “there was no need for me to submit an email to the Mayor.”

“I explored any of my ideas, along with any early ideas from others, in real time conversations, with the team based on evolving understanding of technical requirements etc.,” Kniech said in an email. “Most didn’t work, so there’d be no point saving up non-viable ideas and putting them on a list to the Mayor from the team at this point either.”

The site that was an early front-runner to host the first sanctioned campsite is now on hold.

Cole Chandler, director of the Colorado Village Collaborative, said his organization is looking for an alternative to the Denver Coliseum parking lot.

The move comes after CdeBaca, who represents the area, signaled she is against that location, which is owned by the city and separated by a highway from the closest homes. CdeBaca’s chief of staff told Denverite that the Globeville and Elyria-Swansea neighborhoods are “being overburdened with camp sites. They’ve done their part.”

Chandler said he’s working with CdeBaca “to try to identify a better location within her council district.”

Of the suggestions submitted by council members, “you could probably cross off six sites right off the bat,” Chandler said. He said stadium parking lots would “require moving mountains to set up,” likely involving discussions with Major League Baseball or the NFL. Parks aren’t an option, he said.

“We’re going through that list of sites and trying to see which, if any, are feasible,” he said.

Chandler also said that “there is no perfect site” and “there is an urgency here.”

“We had hoped to be operational at the Coliseum by Aug. 6, but that timeline is off the table,” he said.

Update: On Wednesday, after this story was published, Councilman Paul Kashmann confirmed that he had not suggested a site, but said he planned to speak with the Mayor’s Office regarding possible sites, including at least one in his district.

Kashmann questioned why the mayor only asked eight of the 13 council members for suggestions, and said “I don’t feel that an arbitrary deadline made a lot of sense.”

“The mayor took years to come around to the point of feeling this was a good idea, and then gave council a week or so to respond to a request for a location,” he said.

(The following photo of the Coliseum area is courtesy Guerrilla Capturing:)

Plus, the site that was an early front-runner to host the first sanctioned campsite is now on hold.

What happened to District 7 and Jolon Clark, Denver has more than 8 districts?

Reporter here. Yes, Denver has 11 districts and two at-large council members. In this case, Mayor Hancock only asked for site suggestions from the eight council members who signed an April letter calling on him to set up sanctioned campsites.

I am a private property owner in District 9. I proposed my private parcel at 3639, 3765 Blake St. CdeBaca submitted it yet I don’t see it listed in the story.

I am unclear as to why Council Member CdeBaca has rejected the Coliseum under the pretense that Globeville/Elyria-Swansea has done their part and then recommends another site within the neighborhood but closer to people’s homes. I agree that the burden to solve tricky social problems has disproportionately fallen on these neighborhoods and that that is not a good approach. But, it seems like the Coliseum is in GES only by default and does not have a strong link to those communities.

It is also a shame that the two stadium options are not seen as viable options as they seem like some of the better potential options.

Lastly, it is hard to get a sense of scale of the site needed for this purpose. Some of the small private lots proposed are orders of magnitude smaller than the stadium or Coliseum lots. What is the need?

As it’s a CITYWIDE issue, ALL districts need to be utilized. And quite frankly Y aren’t large oversized lots @ rodeo & sports arenas/stadiums/
venues being utilized ??? There isn’t any sports being played in those venues. Also, why isn’t Denver using hotels & motels like Los Angeles ??