Kindness Yoga has announced it will permanently close all of its nine locations. (Courtesy Kindness Yoga)

Gyms are among the biggest victims of the financial fallout that’s resulted from the coronavirus pandemic.

In mid-March, in Denver and most of the country, state and local order governments ordered gyms to close their doors as they cracked down on public gatherings. Many gyms chose to move operations online or hold one-on-one personal training sessions.

While some gyms have now reopened, others have decided to close altogether.

Three months later, here are the known closures in the Denver area. Some were announced in March, and others have become clear as public-gathering restrictions have begun to ease locally. The Denver Post first reported some closures.

This page will be updated as we learn more. Are we missing some? Email reporter Lily O’Neill at lily@businessden.com.

It’s in reverse chronological order, so closures that became clear more recently are listed up top. Click the name for more in-depth coverage.

The studio, which opened in 2018 at 4414 Yates St., has been closed since March and its exterior sign has been removed from the building. Oasis Yoga’s landlord sued the studio founders in July, saying they breached their lease by failing to pay rent and abandoning the space.

The cycling studio at 1900 17th St. has been closed since March and failed to pay six months’ worth of rent, according to a letter from an attorney representing the business’ landlord posted on its door in July. The New York-based chain opened the location on the ground floor of apartment complex Cadence Union Station in the summer of 2018.

The gymnastics-inspired facility has been open since 2013 and announced its closure on Instagram in August, citing the coronavirus pandemic. “We did try to make this work and wanted badly for relocation to be an option, but, financially it’s just too risky especially considering the future unknowns with regard to COVID and gyms specifically,” founder Orench Lagman wrote.

DeCO Fitness, which opened in 2012 as a CrossFit affiliate, announced it would be closing its brick-and-mortar location at the end of August, thanks to the pandemic. “Ultimately, people are nervous about coming back in and understandably so, and we just simply didn’t have the volume to support the type of overhead that a brick-and-mortar necessitates,” founder Leslie Friedman said.

The combination yoga studio and juice bar, which opened in June 2019, closes permanently on July 18. “The two businesses really supported each other and without one functioning fully — so without the ability to run full yoga classes and get as many people through our doors as possible — the business model collapses,” an owner told BusinessDen.

Kindness Yoga announced on June 19 that it would not be reopening all nine of its Denver locations, as BusinessDen first reported. The yoga chain already was planning on shutting down its Hilltop, Park Meadows, Platte Street and RiNo studios as a result of financial fallout from the pandemic. Instead, Kindness Yoga CEO Patrick Harrington decided to cease operations entirely after company yoga instructors shared negative experiences on social media.

Broche Ballet, an adult ballet studio, announced in a June 18 Facebook post that it would not be reopening its two downtown locations and Englewood studio. “But while our physical doors are closing, the good news is that we LOVE dancing with you online so much that we will be continuing our online ballet classes as we start our next chapter,” the Facebook post reads.

Flex Yoga + Barre initially set up an online livestream but has decided to close both its Park Hill and Five Points locations, according to a June 11 Instagram post. “From our first class to our last, what an amazing ride it’s been,” the business wrote. “We are so grateful for the friends made, lessons learned, laughs, blood, sweat, tears, late nights, early mornings, and everything in between.”

Bekn, which offered fitness testing, physical therapy, exercise and nutrition programming, and gym access, closed its last location in Stapleton on June 8 as a result of the pandemic after already closing its RiNo and Castle Rock locations, according to a Facebook post.

Samadhi Center for Yoga: All locations

Samadhi Center for Yoga, which had studios in Uptown, Golden Triangle and Englewood, closed all of its studios permanently, according to a June 7 Facebook post. The studio has started a new website, where it is hosting live streams by its former instructors.

Zenver yoga closed its West Highland studio on June 1. It will continue to host livestream classes on its online platform and begin hosting physical classes at Nurture on July 5. 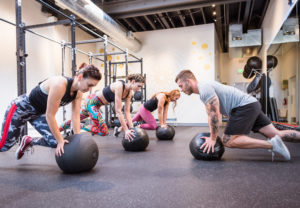 After five years, Rebel Workout on South Broadway will not reopen. Owner Melissa Levy said the fitness studio, which offers high-interval training, yoga, indoor cycling and other fast-paced group classes, will not renew its brick-and-mortar lease come July but will continue to offer classes online.

24 Hour Fitness closed 13 Colorado locations and filed for bankruptcy in June, as BusinessDen previously reported. The fitness chain now has 18 gyms in Colorado, 16 of which will reopen July 22 and two that will reopen July 7.

After filing for bankruptcy, Gold’s Gyms closed 30 company-owned gyms across the country, including three locations in Colorado Springs, according to a Facebook post.

Kindness Yoga has announced it will permanently close all of its nine locations. (Courtesy Kindness Yoga)

From one-off studios to local and nation chains, the fitness industry is contracting.