Kindness Yoga, a local chain that was planning to close half its locations as a result of financial fallout from the pandemic, has instead decided to cease operations entirely after company yoga instructors shared negative experiences on social media last week.

On Friday — two days after the first complaint — founder Patrick Harrington announced on Instagram that the Denver-based company’s nine locations would not reopen. The first Kindness studio opened in 2001.

“It took from Wednesday to Friday of last week to destroy our majority good reputation,” Harrington told BusinessDen Monday. “There were obviously people who felt mistreated and we were not perfect in that we were blind in certain areas, and we apologize for any harm done.”

All Kindness Yoga locations have been temporarily closed since March, and as a result, Harrington said the company has lost two-thirds of its revenue in the past three months. He worked out deals with landlords and planned to close four locations: the company’s Hilltop, Park Meadows, Platte Street and RiNo studios.

Harrington expected to reopen the other five locations. Kindness’ South Broadway studio would be first, returning to life on July 1. Four others in Capitol Hill, Bonnie Brae, Golden and Stanley Marketplace would follow.

Those plans changed when Davidia Turner, a black instructor, announced her resignation on Wednesday. In an Instagram post, she accused the company of “blatant performative activism” for hosting yoga classes for people of color in the midst of the recent Black Lives Matter movement and said Kindness has “ignored calls to action for years around the systemic changes that needed to be made within your company.” Turner used the hashtag #calloutkindness. 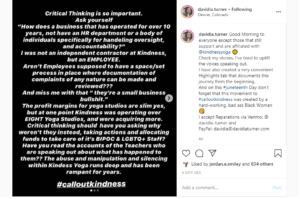 After Turner’s post, several other instructors criticized the company, some saying they felt dismissed in the past when sharing concerns over what they saw as a lack of resources for non-white or LGBTQ instructors.

Harrington said Monday that more than 400 people cancelled their Kindness memberships in the wake of the posts. Reopening five locations as planned was no longer possible financially, and the company is talking to a bankruptcy attorney, he said.

“I think Kindness’s downfall is the same thing that’s tearing apart our country: a lack of awareness of the systemic racism, sexism and more that keep people of color and the LGBTQ+ community marginalized and challenged with day-to-day life in ways that the dominant culture is blind to,” Harrington said. “At Kindness, we have been run by humans, and we made mistakes.”

Harrington acknowledged that not all of Kindness instructors’ concerns were answered diligently, and he attributed that partly to the company’s large staff of 150 yoga teachers.

“We got disconnected from our teachers because when we had 75 instructors we were a family, but at 150 teachers we were negligent,” Harrington said. “We could not maintain connection the way that we had structured our business, and we weren’t experienced enough to know that we needed an HR department, nonetheless afford it. We just kept expanding.”

“It was our intention to bring people of different economic backgrounds and strata together in the wealthiest area of town, so they could have exposure together and humanize the experience through yoga,” Harrington said.

The donation-based model had been failing for years, according to Harrington, and the company has incurred nearly $500,000 in debt as a result. Before the pandemic, Kindness Yoga was going to launch a fundraising campaign to help alleviate some of the debt and reconfigure a model that is still profitable.

“There has never been a profit distribution to me or any shareholders,” Harrington said. “Every dollar of profit has gone back into the maintaining of the studios. I always reinvested into the mission of opening another space.”

Speaking through tears Monday, Harrington said he wished the company wasn’t ending on a bad note.

“I am so proud of our organization, our teachers, our students and what these last 20 years have meant to me,” Harrington said. “I’m honored to have been in the position of holding space for yoga teachers and yoga students, and for the people who we made a difference for, there’s no need to justify or defend anything.”

“It took from Wednesday to Friday of last week to destroy our majority good reputation,” founder Patrick Harrington told BusinessDen.

Grateful for Kindness yoga and all the wonderful teachers who guided the community over the years. The “pay what you can” model allowed so many to practice.

Kindness and the other studios who have closed will be missed, especially in the time when yogis are needed.

Notice this witch has the nerve to ask for reparations in her post. HA what a hypocrite. Some yogi. Strange that so many in our society have such a need to be the victim!

Notice the article didn’t make mention of her request for reparations. Funny you should call her a witch – her website actually describes herself as such. The business owner clearly had good intentions but was a poor manager, losing $500,000. That means he was subsidizing the instructors’ pay, a fact Ms. Turner failed to recognize when she lead an effort that will force this guy into bankruptcy.

Did you mean: “if it isn’t the consequences of ignoring BIPOC employees for months and months until this was the only way they could be heard”?

And, for the record, I think it’s clear that Patrick, at least, gets the sentiment I previously expressed now that he’s had time to process it.

He tried doing something and got accused of “Performative Activism”. No-win situation for the poor guy. And then, in a mass demonstration of blatant Performative Counter-Activism, egged on by the self-described witch Ms. Turner, 400 people decided to support her effort and force him to close the business entirely and consider a bankruptcy filing. No kindness, no compassion, and certainly no divine spark of the heart chakra from these yogis. Just mean.

The way this was done by yogis was painful. It created suffering beyond their target of Patrick to impact the practicing yogi community. Many depended on their connection to yoga that was provided by Kindness. This creates unnecessary suffering, grieving and loneliness in an already fractured environment. A better path to healing for all could have been chosen. We are all learning everyday to be better humans on the yogic path. It has taken us lifetimes to get here, and will take many more lifetimes to get to where we need to be. Peace and healing to all.