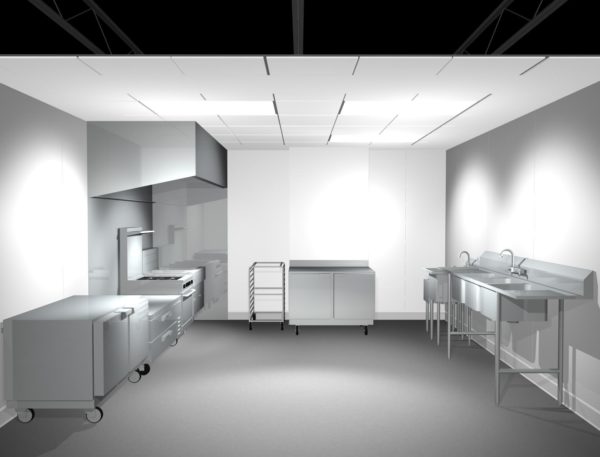 Ghost kitchens seem to be the new trend popping up around Denver.

ChefReady is the newest to enter the market, with plans to open mid-July at 1468 S. Cherokee St. in the Overland neighborhood. It will offer 10 rentable commercial kitchen stations under one roof for delivery-only concepts.

Founders Nili Malach Poynter and her husband Robert said they have seen friends fail for years in the dining scene, and believe their model brings an affordable solution to Denver restaurateurs. And with delivery food on the rise as the result of the pandemic, their timing seems perfect.

“Many of the big ghost kitchens have a churn-and-burn mentality, and we wanted to create a company that offers the convenience of what a ghost kitchen does, but also has a greater efficiency, greener footprint in general, and more of a mom-and-pop service,” Nili Poynter said, noting the company plans to incorporate solar panels.

No concepts have yet signed a lease, the couple said.

The Poynters, who are from Denver and now live in San Francisco, purchased the property off Santa Fe Drive in November 2019 for $1.2 million, according to public records. The 4,540-square-foot space will be divided into 200- to 250-square-foot “plug and play” kitchens with commercial hoods, sinks, backup generators, AC and heat, electric and gas hookups, and pest control.

ChefReady also will give its tenants the ability to customize their kitchen’s layout with extra refrigeration, extra storage space and deep-cleaning services. They plan to provide a team of experts to help the restaurants with marketing, architectural and permitting guidance.

For delivery assistance, the company will have software that aggregates third-party delivery programs, such as GrubHub and UberEats. Food runners will bring the food from stations to delivery drivers.

“We want to host restaurants that are well-established that really just want to expand their brand or food trucks that are finally ready to get in the kitchen, and maybe some up-and-coming chefs who couldn’t afford to do anything like this,” Poynter said. “We’d like to build a community of chefs where they can look to each other for support.”

The couple launched Vinyl Interactive, a performance-based data science and marketing firm in San Francisco, in 2005.

“We’ve always been entrepreneurs and we wanted to give other entrepreneurs the chance and ability to finally be able to work for themselves,” Poynter said. “A lot of these chefs and restaurateurs are always working for a landlord or with a limited budget and margin.”

While they plan to run the business from San Francisco, Nili’s brother Steven Malach will run things on the ground as director of sales.

Ghost kitchens already have a presence in Denver.

Last month, representatives working on behalf of CloudKitchens, which is led by Uber co-founder Travis Kalanick, requested permits from the city to build out a location at 810 N. Vallejo St., records show.