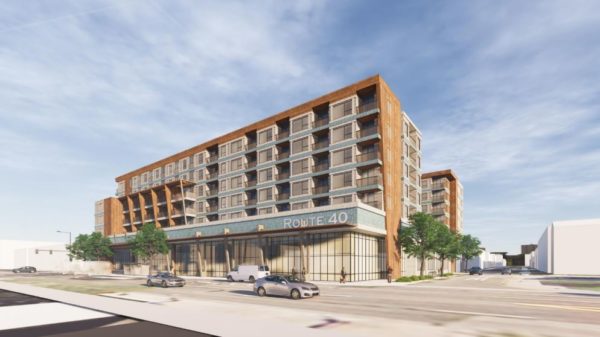 A rendering of the proposed apartment complex. (Public Records)

Plans to replace an apartment building along East Colfax Avenue with a much bigger complex have been resurrected.

An early-stage development proposal known as a concept plan was submitted to the city in February, calling for an eight-story, 205-unit complex on the 1000 block of East Colfax Avenue.

The structure would span the south side of Colfax between Corona and Downing streets. It would replace the existing three-story, 28-unit Route 40 apartment building, which has retail space on the ground floor as well as an adjacent parking lot. 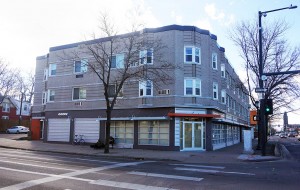 The site is owned by Englewood-based Consolidated Investment Group, which purchased it for $9.3 million in 2015, according to public records.

An executive with Consolidated told BusinessDen that year that it planned to build a 140-unit apartment building next to the existing structure. By early 2017, however, the company had shifted course, and said it planned to demolish the structure, in part because retail tenants had moved out.

The site has sat unchanged for three years. Consolidated didn’t respond to a request for comment last week.

The proposed project, also referred to as Route 40, would have retail space along Colfax Avenue, and a parking garage with 193 spaces accessed from Corona Street. On the upper floors, there would be 66 studios, 116 one-bedroom units and 23 two-bedroom units.

A rendering of the proposed apartment complex. (Public Records)

The owner of the building at Downing Street has discussed this possibility before.