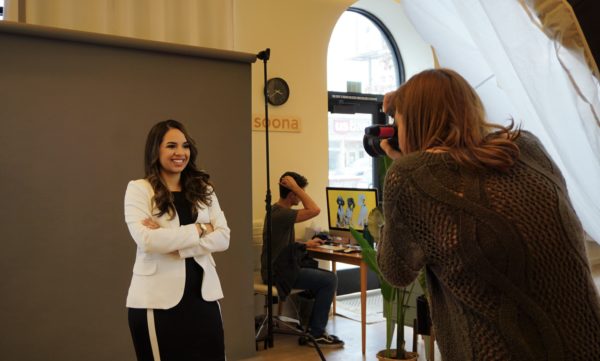 A customer from Chicago poses for a headshot at Soona’s Denver studio. (Photos by Cassidy Ritter)

Soona has something to say “cheese” about.

The Denver-based startup, which operates studios that provide businesses with professional photos and video within 24 hours, raised $3.41 million this month.

It’s the company’s largest capital raise to date, bringing Soona to a total of $4.86 million raised since its December 2018 launch, according to SEC filings.

“Our goal was to raise $3 million,” co-founder Liz Giorgi said. “We really felt like we had some early success and some early traction and wanted to make sure that there was enough interest in continuing to grow. … We have really vocal and passionate people engaged in Soona overall, especially in our investor community. And they really motivated me to raise additional capital so we could go faster.” 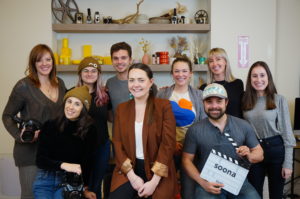 The recent capital raise, led by Matchstick Ventures and Starting Line, will be used to open Soona’s third studio, in Austin, Texas. The existing studios are in Denver and Minneapolis. The Austin location is expected to open by April.

The Denver studio at 1235 S. Broadway, which opened last April, includes four different sets: a living room, a kitchen, a color backdrop and a flexible space that recently was used for a dance party, Giorgi said.

“We learned a lot of really good lessons opening this location,” she said.

The new location will offer the same sets as Denver but also will have a dedicated space for clients to review their content.

“One of the things that we’ve learned really, really quickly is that people love hanging out at Soona,” Giorgi said. “We really thought that they were going to want to come in and get their shoot done and take off. So (we are) trying to create a little bit more of a waiting area or holding area so that they can just chill out before they go back to the office.”

Soona has also changed its pricing structure. Originally, it charged $393 for nine photos or a video shorter than five minutes; customers also could pay $453 for a monthly membership. Now, it’s nixed the membership component, and charges $39 per photo and $93 for two-minute videos. 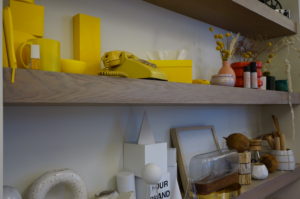 Soona studios have a variety of props for customers to use.

Customers can view photos as they are taken, and buy photos at the studio or online at a later date. If clients don’t live near a studio, Giorgi said they can ship their products to a studio.

“We really feel that there’s an opportunity here for someone to own content creation as a category space and we believe Soona is the best product on the market in terms of being able to actually deliver on that vision,” Giorgi said.

The company has approximately 1,000 clients. Locally, it works with Sheets & Giggles, Overtone and Pachamama.

A customer from Chicago poses for a headshot at Soona’s Denver studio. (Photos by Cassidy Ritter)