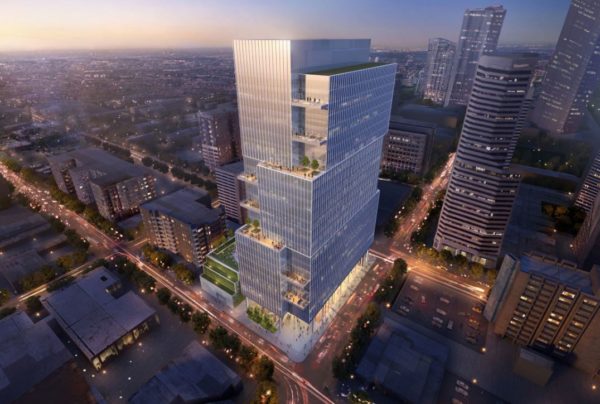 A developer responsible for multiple skyscrapers in Chicago wants to take on Denver.

The project concept, a precursor to a more detailed site-development plan, proposes a 30- or 32-story office building (depending how one counts the mechanical/parking levels) at 1901 Arapahoe St. 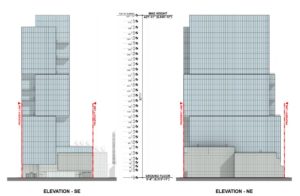 A drawing showing the scale of the proposed tower. (Public records)

The 1.26-acre parcel is currently a parking lot that spans 19th Street between Arapahoe and Lawrence Streets. Riverside apparently doesn’t love the current address; its plans refer to the site as 1900 Lawrence St.

The site, which is across the street from the full-city-block bus station that Greyhound is trying to unload, is owned by Denver-based Paradise Land Co., led by Buzz Geller. He has it listed for sale at $27.5 million, or $500 a square foot.

Geller was briefly under contract last year to sell the site to developer Michael Eisenstein, who floated the idea of building a 40-story mural-inspired residential tower. Further back, in 2017, a Miami developer explored a two-tower condo project at the site.

BusinessDen reported in December that the deal with Eisenstein had fallen apart and a new party — now revealed to be Riverside — was under contract for the site.

The plans call for 628 parking spaces, found on two below-ground levels and four above-ground levels. The ground floor would feature a lobby and 9,500 square feet of retail space. Offices would start above the parking.

The structure would be just shy of 428 feet tall, which would put it around No. 14 on the list of Denver’s tallest buildings.

Riverside did not respond to requests for comment. CEO John O’Donnell founded the company in 2010, according to its website.

Riverside’s 54-story 150 North Riverside office tower was completed in 2017. The 815-feet-tall, 55-story Bank of America tower, also known as 110 North Wacker, topped out this fall; it is the tallest building to be constructed in the city in three decades. Other projects listed on Riverside’s website include the 50-story BMO Tower, also in Chicago.