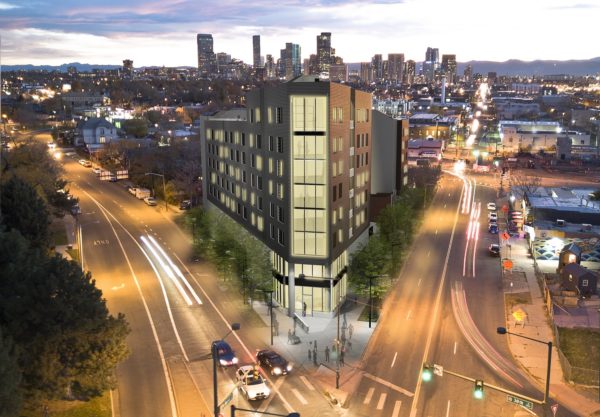 A project in RiNo that had planned to mix short-term rental units with more traditional long-term leases has morphed into a full-on hotel, albeit one with ample residential touches.

Denver-based Sage Hospitality announced Wednesday that it is joining with Walnut Development Partners and Exdo Development on the seven-story, 165-room hotel coming to 3770 Walnut St., a short walk from the 38th and Blake commuter rail station.

The independent hotel has yet to be named, and is tentatively slated to open in early 2021. Sage Hospitality — whose other independent brands locally include The Maven, The Crawford and The Oxford — said in a news release that the rooms will “marry coveted residential amenities with the unparalleled service that can only be delivered by a hotel.” All units will feature full kitchens, a lofted bed, pull-out sofa and coffee table.

“By merging the comfort of your apartment with the high-level service, experience and flexibility of a hotel, we believe the property will be very complementary to the growth currently underway in the neighborhood,” Jason Kaplan, of Walnut Development Partners, said in a statement.

Principals of Walnut Development Partners include Chad Ellington, Anthony Loeffler and Jason Kaplan. In early 2018, the partners proposed a previous iteration of the project, which called for units on some floors to be rented on a nightly or weekly basis, with the remaining floors set aside for long-term tenants. Sage was not involved with the project at the time.

The bulk of the site has been cleared, and construction is set to begin. But one building remains; the project will be built around the two-story structure at 3724 Walnut St., which dates to 1890. The four-bedroom home will be updated and available for reservations.

The ground floor of the hotel will feature a restaurant, as well as a gear locker stocked with items guests can borrow. Guests using the fitness center will find, among other things, Peloton bikes and Peloton treadmills. The rooftop will have an indoor bar with adjoining outdoor deck, complete with lounge seating and fire pits, as well as two hot tubs.

“The explosive growth of the RiNo Art District has been a dynamic change for the city of Denver, and we are excited to be a part of that growth,” Sage President and CEO Walter Isenberg said in a statement.

RiNo currently has two hotels, The Source Hotel at 3330 Brighton Blvd. and The Ramble Hotel on the other side of the district at 1280 25th St. One more is under construction, a 140-room Best Western Vib at 3560 Brighton Blvd.

Proposed but yet to break ground are a 12-story, 160-room hotel at 3660 Brighton Blvd., and the hotel portion of World Trade Center Denver, which is slated to have approximately 240 rooms.

Work is set to begin on the project, and completion is tentatively slated for early 2021.