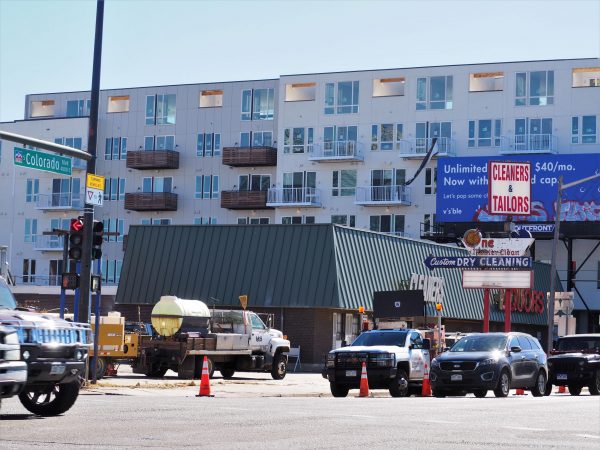 The southeast corner of Colorado Boulevard and Evans Avenue is currently home to a liquor store and dry cleaners. (Thomas Gounley)

Change is in the works for the southeast corner of Colorado Boulevard and Evans Avenue.

Denver-based development firm Q Factor, led by Jason Winkler and best known for its Industry coworking spaces in RiNo, is partnering with the owner of 1.77 acres on a planned project that would incorporate a hotel, office space, residential units and space for retail tenants, plus an elevated restaurant.

The site currently has one building on it, which is home to a dry cleaners. A liquor store previously also operated at the site.

The properties are owned by Z Portfolio LLC, and zoned C-MX-5, which allows for mixed-use projects up to five stories. The applicants are requesting the site be rezoned C-MX-12, which would allow for 12 stories.

Vinny English, chief development officer for Q Factor, and Sandy Hecomovich, asset manager for Z Portfolio, told a council committee Tuesday that they plan to build two towers atop a podium base that would incorporate parking and retail space. The project would be developed through a joint venture.

The shorter structure, which would top out at eight stories, is earmarked for a hotel with approximately 120 rooms, the pair said. The taller structure, 12 stories, is slated to incorporate about 86 residential units as well as office space.

The structures would be connected by a bridge on the eighth story, which would include a restaurant.

Q Factor and Z Portfolio have submitted an early-stage development proposal to the city, but have yet to submit a more detailed site-development plan.

Denver’s Planning Board voted 7-1 in favor of the rezoning this month. A city staffer said the dissenting vote came from a board member who didn’t see a reason to allow 12 stories when Blueprint Denver recommends a maximum of eight stories at the site.

English said the square footage of the proposed project is equal to a hypothetical five-story project extending across the entire site, which would be allowed under the current zoning.

“We’re sculpting that same density into something that’s more architecturally pleasing,” he said.

The development site is a block from the Colorado Station light-rail stop. A six-story apartment complex was recently added just to the south.

The committee voted Tuesday to send the rezoning request to be considered by the full body.

Q Factor also is working on a project near the 41st and Fox commuter rail station in Globeville. As BusinessDen reported earlier this month, the company is looking to develop office and residential towers atop a big-box retail store that appears likely to be a Home Depot.

Editor’s Note: This story has been updated to note that the liquor store at the site is no longer open.

The southeast corner of Colorado Boulevard and Evans Avenue is currently home to a liquor store and dry cleaners. (Thomas Gounley)

The site currently has one building on it, which is home to a liquor store and a dry cleaners.

The liquor store closed two years ago. Total Liquor bought the license and moved it catty-corner across the street to open a much larger store.

Excellent news. That corner is decrepit and a poor use of space.