Seven months after closing an Englewood location, a local fitness chain is throwing in the towel on a location near Wash Park.

The Wash Park studio opened in October 2017 in a building otherwise occupied by Alchemy Creative Workspace. Lindley said the decision to close came after assessing how the chain’s studios were performing in Denver’s competitive fitness scene.

“We had to make a decision about which ones are doing well and which aren’t doing as well,” she said Friday. “We reached out to our landlord to see how they could help us, but there’s a decision to be made on both sides. They thought it was best for us to part ways.” 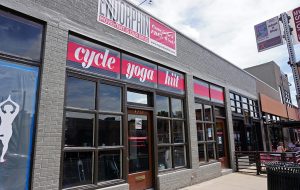 An email sent to Endorphin employees last week and obtained by BusinessDen stated that Endorphin’s landlords in Wash Park approached the business in August with an offer to buy out the remainder of its lease. When Endorphin indicated it wanted to continue operating at the location, the landlords “responded that they are not willing to support us in continuing business at the studio,” the email said.

Lindley declined to address the specifics of the email, but said that it doesn’t portray the entire picture.

“We’ve worked it out diplomatically with our current landlords,” she said. “We’re sad not to be there, but we made a decision that’s in the best interest for our business.”

The building is owned by Alchemy owners Chris Fulenwider and Travis McAfoos.

“It was a mutual deal,” Fulenwider said Monday; he declined to address the email. “We thought this would be best moving forward.”

Endorphin started off as Qi Functional Training Centers in August 2007 and had grown to four locations by 2014, when Lindley and her husband Chris split from their original business partner. The former partner took over two locations and the Lindleys took the remaining two, rebranding them into Endorphin, Lindley said.

The business has grown since then. Endorphin will have eight studios once the Wash Park location closes. Another studio along South Broadway in Englewood closed in the spring.

Though the soon-to-close Wash Park studio offers only yoga and barre classes, other Endorphin studios offer various fitness concepts such as cycling, high-intensity interval training and kettlebell training, according to its website.

Lindley said that there are no studio-specific memberships, and that all members can go to any Endorphin location. The company notified members on Oct. 9 about the impending closure.

It’s the company’s second closure this year for the fitness chain.