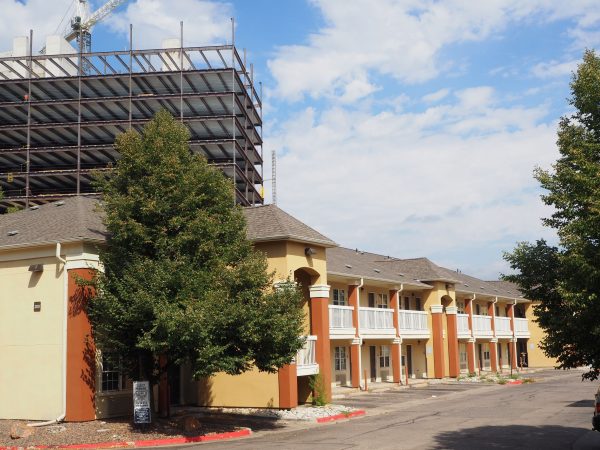 The proposed 18-story building would replace the existing two-story hotel at 4885 S. Quebec St. in Denver. In the background is under-construction office tower 6900 Layton. (Photos by Thomas Gounley)

The Denver-based company, which owns approximately 60 hotels, submitted a site-development plan to the city in late August, detailing plans for a project that would replace the company’s existing Economy Suites DTC hotel on 2.36 acres at 4885 S. Quebec St. in Denver.

The plans show the building would have retail, restaurant and lobby space on the ground floor, and amenities, including a pool, conference room and fitness area on the second floor. Above that would be five floors of hotel rooms, approximately 236 rooms in all, topped by 11 stories of office space.

In all, 355,419 square feet would be devoted to office use, compared to 145,651 square feet of hotel rooms. There would be three levels of underground parking.

Stonebridge, led by founder and CEO Navin Dimond, declined to comment for this story.

The current hotel at the site, constructed in 1995, consists of three two-story buildings. The property was for years an Extended Stay America, but since has been rebranded Economy Suites DTC; a staffer at the location last week said that change was made in July. 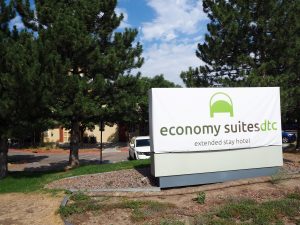 The hotel operated for years as an Extended Stay America, but was recently rebranded as Economy Suites DTC.

The rezoning request had been opposed by Glendale-based Front Range Land and Development Co., which master-planned much of the surrounding area, on the grounds that the project would benefit from infrastructure funded by other developers and property owners. At the meeting, a lawyer representing Stonebridge called the existing hotel on the site an “eyesore” and said the area is a “hotbed” of criminal activity, according to The Denver Post.

Stonebridge does not appear to have other projects that incorporate both hotel rooms and significant amounts of office space, according to a portfolio on its website. But the company is converting the former Emily Griffith campus in downtown Denver into a hotel and retail complex.

Stonebridge’s proposal isn’t the only new hotel that could be on its way to Belleview Station. Denver-based Cypress 16 last month proposed a 20-story, 190-room Kimpton Hotel across the street, at the northwest corner of Chenango Avenue and Olive Street. Just north of that site, office tower 6900 Layton is under construction.

The proposed 18-story building would replace the existing two-story hotel at 4885 S. Quebec St. in Denver. In the background is under-construction office tower 6900 Layton. (Photos by Thomas Gounley)

The project would replace an existing hotel at the site.