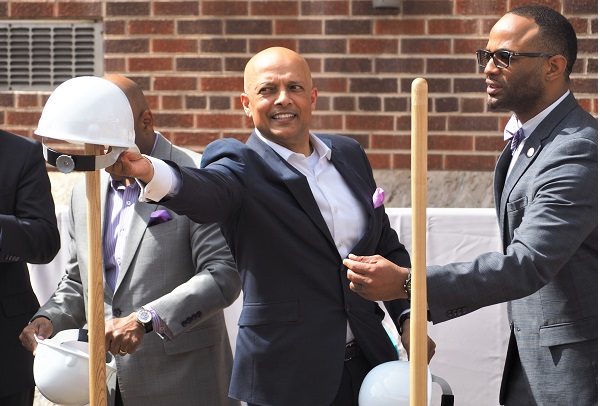 Stonebridge founder and CEO Navin Dimond reaches for a hard hat to give to Denver Councilman Albus Brooks (right). (Photos by Thomas Gounley)

The redevelopment of the former Emily Griffith vocational school campus near the Colorado Convention Center is underway.

Denver-based hotel operator Stonebridge Cos. — which bought the full city block the school sits on for $25.3 million in 2017, three years after the last classes there — held a groundbreaking ceremony Tuesday to mark the start of its conversion to a hotel and retail complex. 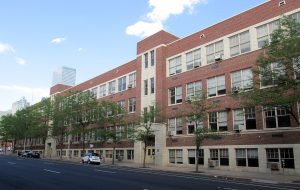 The former school building, which lines the 1200 block of Welton Street, has been designated a local historic landmark, a status meant to preserve certain features of the site. Stonebridge is converting it to a 250-room hotel with a restaurant and 3,000 square feet of meeting space.

The Glenarm side of the block will be turned into retail space and parking, with an activated alley.

“This is an example today that preservation and revitalization can coexist,” Denver Councilman Albus Brooks said at the Tuesday ceremony. 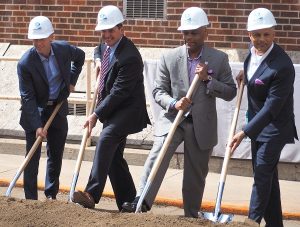 The project is expected to be completed in late 2020 or early 2021. It is expected to cost $96.5 million; $21.8 million of that would be reimbursed through tax-increment financing in collaboration with the Denver Urban Renewal Authority, diverting sales and property taxes pertaining to the site. City Council approved the redevelopment plan last October.

Stonebridge Cos. owns and/or operates 30 hotels across Colorado, along with others in other states. Locally, the company opened The Jacquard Hotel & Rooftop in Cherry Creek last fall, and expects to open a dual-brand hotel at the corner of 15th and Stout streets in downtown Denver later this year. 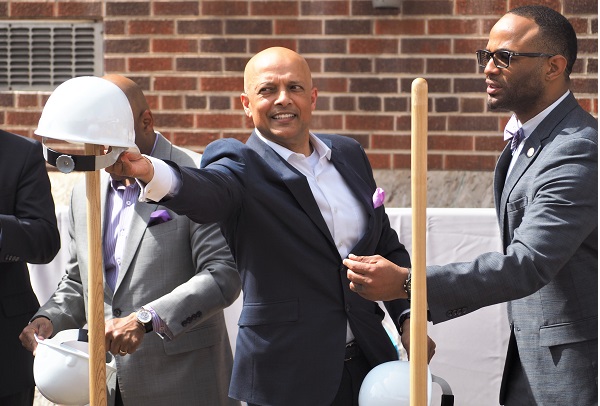 Stonebridge founder and CEO Navin Dimond reaches for a hard hat to give to Denver Councilman Albus Brooks (right). (Photos by Thomas Gounley)

Denver-based Stonebridge is turning the former school building into a 250-room hotel. Retail space also will be added to the block.