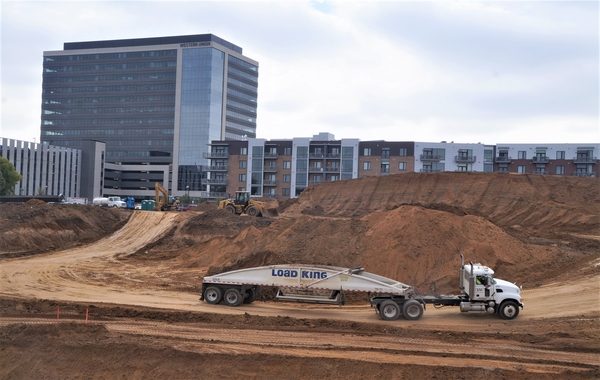 Work has begun on Prime West’s 6900 Layton office building, a short walk from One Belleview Station, which the company also developed. (Thomas Gounley)

Developer Prime West has begun work on a new 15-story office building in the Denver Tech Center, and Newmont Mining Corp. plans to move its headquarters into the structure.

Greenwood Village-based Newmont, one of the world’s largest producers of gold, has leased 142,000 square feet in the building, known as 6900 Layton. The structure is being erected at the southeast corner of Layton Avenue and Newport Street in the master-planned Belleview Station site.

It’s the second high-profile corporate win for Denver-based Prime West at Belleview Station. The firm also built the nearby One Belleview Station, which lured Western Union’s headquarters from Englewood.

Newmont is taking the seventh through 10th floors at 6900 Layton. 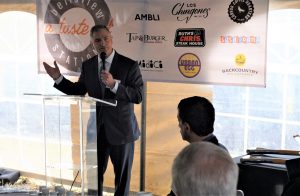 “We could not have kicked this thing off the way we did and got going without you,” Prime West CEO Jim Neenan told Newmont at a Thursday groundbreaking ceremony.

Newmont’s headquarters are currently in the Palazzo Verdi building, at 6363 S. Fiddler’s Green Circle in Greenwood Village, less than three miles south of 6900 Layton, which is within Denver city limits.

“We’re not going to lose 25 percent of our employees due to a commute change,” said Bill MacGowan, Newmont’s executive vice president of human resources.

MacGowan said the company liked the site of the new building, and that it meant Newmont could rethink its offices completely instead of trying to renovate its current space.

Newmont spokesman Omar Jabara said the company currently has 218,000 square feet across eight floors at Palazzo Verdi, but that the firm has been subleasing one of those floors. Even factoring in the sublease, Newmont’s footprint at 6900 Layton will be significantly smaller.

“The new office will use space a lot more efficiently and have more open/modern floor plans, which accounts for the difference,” Jabara said.

MacGowan said at the Thursday ceremony that 400 to 500 Newmont employees will move into the new building, which is expected to be completed in 2020.

Ryan Stout, Nathan Bradley and Zachary Williams of Cushman & Wakefield are leasing 6900 Layton’s five remaining floors of office space. Tyler Bray and Sam Bell, also with the firm, are leasing out the 14,283 square feet of ground-floor retail space. Bray said they are targeting a high-end restaurant for a unit at the corner of Layton and Newport.

The building is being built on 2.32 acres. Prime West bought the property for $7.26 million last month from Glendale-based Front Range Land and Development Co., the master planner of the 55-acre Belleview Station site.

“This is what the next generation of workers is looking for — that urban feel,” Neenan said. “But not all of it has to happen in the downtown core.”

Partners Group, a Swiss private equity firm, is the capital partner in 6900 Layton. Gensler designed the project. US Bank and Independent Bank provided financing. The Weitz Co. is the general contractor.

Work has begun on Prime West’s 6900 Layton office building, a short walk from One Belleview Station, which the company also developed. (Thomas Gounley)

The company, one of the world’s largest gold producers, will move to the site from Greenwood Village.