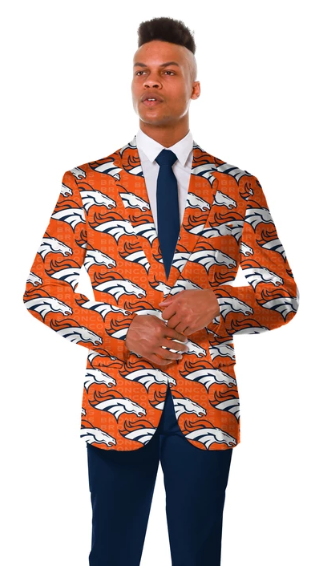 The home of the denim swimsuit thinks its newest product line is a slam dunk.

“The idea was to create a line that, from a product perspective, is still loud and fun and irreverent, but more focused in on the collegiate and professional sports market,” said CEO Chris White. “Brandwise, it’s still silly, fun, bright, outlandish clothing, but it’s a little more family-friendly.”

Tellum & Chop has licensing agreements with about 30 colleges, including Colorado State University and CU-Boulder. The company also is offering NFL-branded clothing, and White said the brand expects to branch out into other sports leagues in the near future.

Unlike Shinesty, which sells its products only online, Tellum & Chop items also will appear in at stadiums and university bookstores, White said.

“It will be a lot more in-person retail, and a lot more pop-up shop activation around sports games and tailgating,” he said. “We want to be in specific, strategic locations so that you could go to a game, see it and purchase it.”

Items, which include overalls and Hawaiian shirts, vary in price from about $20 for a branded tie to $200 for a blazer.

To help fund the new line, the company raised about $2.5 million, it reported in an Aug. 1 SEC filing.

“The intention is for pretty heavy expansion, and investing in things like (Tellum & Chop),” White said. We’re actively expanding our product lines and we’ve almost doubled our team in the last year.”

White said he’s hired about 20 people in the last year, bringing the company’s employee count to 40, who split their work between the two brands. The company also has brought on a brand manager who is specific to Tellum & Chop. 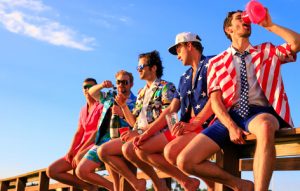 “The purpose of the brand is to force people to take themselves less seriously,” White said. “Everything we do is centered around being irreverent and sarcastic. There are enough serious brands in the world — when you’re selling people products for parties, that experience should be funny.”

The Boulder-based home of Budweiser-branded “pajameralls” and denim swimsuits has licensing agreements with about 30 colleges, as well as the NFL.