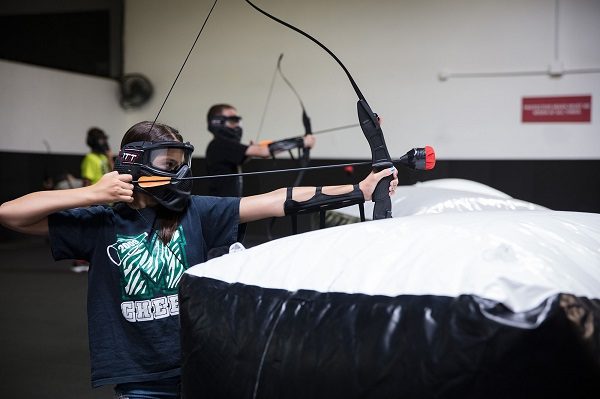 Archery dodgeball is a dodgeball-like game that incorporates bows and arrows instead of balls. (Photos courtesy Jesse Warlick and Puneet Maheshwari)

Jesse Warlick has his target set on expansion.

The owner of Arvada’s Archery Games, where patrons play a dodgeball-like game that incorporates bows and arrows instead of balls, has added Ohio and Virginia to his archery tag repertoire.

“It’s a new concept for the U.S., so it’s pretty exciting,” Warlick said. “The feedback we’ve gotten in the Denver market is that other people are excited as well.”

His Denver-area rendition, which opened in November at 5405 W. 56th Ave., is a licensee of a Canada-based company of the same name. 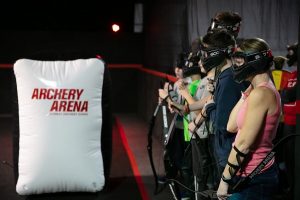 Its Arvada arena opened in November.

Warlick said he signed the license agreement mainly to receive the initial guidance operating the little-known business concept. Once he got the hang of it, he decided his next two concepts would be independent ventures.

The expansion began when the Denver business acquired the assets to Ohio’s Archery Arena, which brought archery dodgeball last year to West Chester, a suburb north of Cincinnati.

Warlick said he had been in touch with the owner, who approached Warlick about taking over the business earlier this year.

“We’ll be investing a bit more into marketing and into the aesthetics of the facility, but otherwise everything will remain the same,” he said.

In Virginia, Warlick and business partner Puneet Maheshwari started from scratch. The pair opened Ultimate Archery in Sterling, about an hour northwest of Washington, D.C., on July 13.

“This one is not as close to downtown as the others,” Warlick said. “But it should be a good market — more family-oriented.” 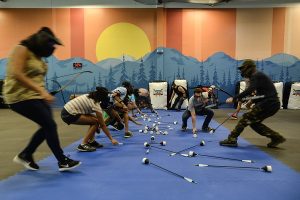 The rules of archery tag are very similar to dodgeball.

The rules of archery tag are very similar to dodgeball: At the whistle, two teams race to collect foam-tipped arrows in the center of the arena, and then fire at the opposing team across the playing field. A player is eliminated when hit by an arrow; if a target catches an arrow, the shooter is out.

One 75-minute session of archery tag at the Arvada arena costs $27 per person, which includes equipment, training, 15 minutes of target practice and refereed game play, according to its website. Private games, often booked for birthday parties or corporate events, cost $450 per 75-minute session of up to 20 players.

The facility also offers leagues, Warlick said. Its five-game summer league in Arvada cost each player $65, and currently brings about 30 people in for weekly games.

Warlick’s businesses use arrows originally used in live-action role playing and manufactured in Germany. The foam-tipped arrows incorporate injection-molded pressure distributors to absorb the force of the hit, according to Archery Games’ website. Warlick said players also are required to wear masks during game play.

Though archery tag can be played at a variety of indoor sports facilities in the U.S., few cater specifically to the game, Warlick said. The Canadian company, which has a presence in Ottawa and Calgary, opened a Boston arena shortly before Archery Games opened in Arvada, and since has added an Omaha location.

Archery dodgeball is a dodgeball-like game that incorporates bows and arrows instead of balls. (Photos courtesy Jesse Warlick and Puneet Maheshwari)