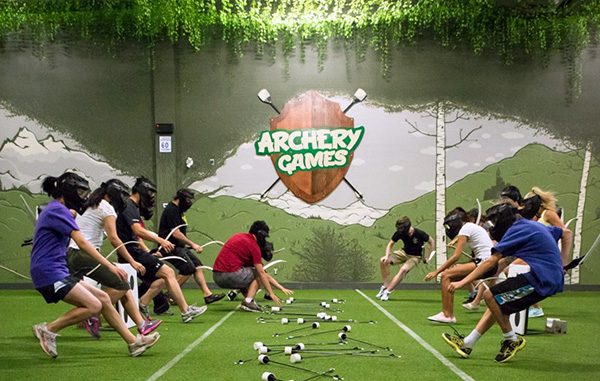 Archery tag is a dodgeball-like game with bows and arrows instead of balls.
(Courtesy Jesse Warlick)

Jesse Warlick has plucked his next business venture from a quiver of Canadian fun.

Warlick is bringing archery tag, a dodgeball-like game with bows and arrows instead of balls, to the Front Range. He’s opening Archery Games in a 5,000-square-foot facility at 5405 W. 56th Ave. Unit D in Arvada.

“We wanted something that was pretty accessible with everyone,” Warlick said. “We wanted it to be really close to the heart of Denver.”

Archery Games is a licensee of the Ottawa-based company of the same name. Archery tag has similar rules to dodgeball: Once the game starts, each player rushes to the middle to grab arrows with foam tips to fling at the opposing team. Like dodgeball, competitors can catch an arrow and the shooter is out.

Customers at Archery Games in Ottawa pay $24 for a 75-minute session, which includes a training session and archery practice. Then players get 50 minutes trying to hit opponents.

Before Arvada’s Archery Games opens in May, the company is opening a location in Boston.

“It’s only mainly the Canadians who have started these arenas … That will actually be their first in the United States,” Warlick said. “They run a really good operation.”

Warlick, 31, is a graduate of the University of Virginia and moved to Denver from Washington, D.C., three years ago. He was previously vice president of Brundage-Bone Concrete Pumping, but after leaving the company last year, started looking for his next business opportunity. That’s when a friend of Warlick’s visited Montreal and started raving about Archery Games.

“I wasn’t really looking at these sorts of opportunities,” he said. “We really actually got into it more from a business perspective.”

Warlick still has to hire a general contractor and architect to build out the space off 56th Avenue.

Archery Games is not the first Canadian brand bringing novel athletic entertainment to Denver. Canada-based Bad Ax Throwing opened its first local outpost last summer, and followed with an expansion to a bigger location over the winter.

Archery tag is a dodgeball-like game with bows and arrows instead of balls.
(Courtesy Jesse Warlick)

A dodgeball-like game with bows and arrows instead of balls is coming to the Front Range.