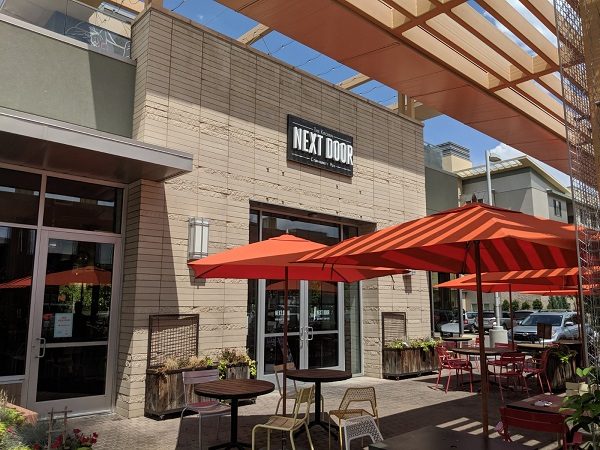 The Glendale location of Next Door American Eatery is closing. (Photos by Libby Flood)

The Glendale location of Next Door American Eatery, one of the concepts from Kimbal Musk’s Boulder-based The Kitchen Restaurant Group, is closing.

The location at 658 S. Colorado Blvd., which has been open since 2013, will close “in a few weeks,” restaurant group President and CEO Don Degnan said in an emailed statement to BusinessDen.

The statement did not detail the reason for the closure or provide an exact timeline.

“We are truly thankful for all of our guests and excited to see them at our other Next Door American Eatery locations,” Degnan said.

Next Door will still have six Colorado locations following the Glendale closure, including locations in Stapleton, LoDo and Highlands Ranch. The brand recently opened an eatery in Fort Collins and plans to open another next month at Orchard Park Place in Westminster, Degnan said.

Kimbal Musk, younger brother of Tesla and SpaceX founder Elon Musk, launched The Kitchen Restaurant Group in 2004 with chef Hugo Matheson. The company also operates the restaurant concepts The Kitchen American Bistro and Hedge Row, according to its website.

The Kitchen came first, opening on Boulder’s Pearl Street in 2004. Next Door debuted in 2011, next door to its sister concept in Boulder. (Next Door first was named The Kitchen Next Door, playing off this proximity and its role as The Kitchen’s more casual counterpart.) 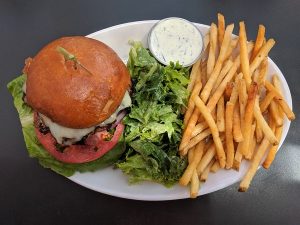 The Next Door features American fare.

The company expanded to Denver in 2012 when The Kitchen opened at 1560 Wazee St. in LoDo. Next Door followed a year later with its soon-to-close Glendale location, then added a LoDo location in 2014.

Next Door also has locations in Tennessee, Indiana, Ohio and Illinois, according to its website. The Kitchen has added an outpost in Chicago.

Hedge Row American Bistro, meanwhile, operates only in Indianapolis. A Denver location in Cherry Creek closed in December after 16 months.

Last year, a Crazy Mountain Brewing Co. taproom was evicted from its space in the Glendale development for failing to pay rent.

The Glendale location of Next Door American Eatery is closing. (Photos by Libby Flood)

It’s one of the restaurant concepts from Boulder-based The Kitchen Restaurant Group, co-owned by Kimbal Musk, brother of Tesla’s Elon.