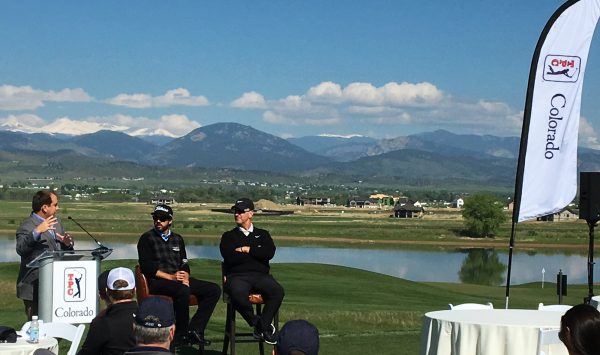 The TPC Colorado Championship at Heron Lakes will be held on July 8th – 14th. (Aaron Kremer)

In two weeks, 156 professional golfers will descend on Berthoud, an hour north of Denver, to compete in the TPC Colorado Championship at Heron Lakes.

And the course, a brand new design by Arthur Schaupeter, has a Par 5 of epic proportions: 780 yards.

The tournament will be part of the Korn Ferry Tour, the developmental tour that feeds the PGA Tour. A five-year agreement is in place to keep the yearly tournament in Berthoud through 2023.

Previously the Web.com tour, its name changed this month when Los Angeles consulting firm Korn Ferry took over as the tour’s umbrella sponsor.

The tournament will mark the return of annual professional golf to Colorado, which has been lacking in the state since The International at Castle Pines Golf Club was cancelled in 2006 after two decades. The 2014 BMW Championship was held at Cherry Hills Golf Club, but that event did not return annually.

“Colorado is known for great crowds. I could see us hitting 25,000 (attendees). Weather permitting, it could be even more,” said Drew Blass, tournament director.

The new TPC Colorado golf course is owned by Heron Lakes Investments. Blass said the firm’s partners, Jon Turner, Chris Frye and Jim Birdsall, “got the ball rolling” by reaching out to the PGA Tour and asking that the planned course join the TPC (Tournament Players Club) Network.

TPC Network courses are built with the infrastructure to accommodate a professional tournament, Blass said.

“TPC saw the vision, and they saw the opportunity here, and they said they’d love to have a professional event here and bring back golf on an annual basis to Colorado,” he said.

Construction on the course began in 2016.

“TPC got involved with the design of (the course), because to be a TPC property, you have strict guidelines about how you keep the golf course and clubhouse,” Blass said.

“You need someone willing to take on that financial risk — a person or company that wants to have golf here and is willing to make it happen,” he said. “It’s not cheap to put on this event.”

There’s a $600,000 purse that will be dispersed among the top 55 players, which Blass said was funded by local supporters, sponsors and ownership. The winner of the tournament get an 18 percent cut of the purse, or $100,000.

The tournament has already locked down some big names, including Colorado resident and former U.S. Open Champion David Duval. Colorado native Mark Hubbard, who’s currently the No. 9 player on the Korn Ferry Tour, will also compete.

The course itself is another achievement for the return of professional golf in Colorado. It’s the only TPC in the state and is the first ground-up golf course development in a decade.

The TPC Colorado Championship at Heron Lakes will be held on July 8th – 14th. (Aaron Kremer)