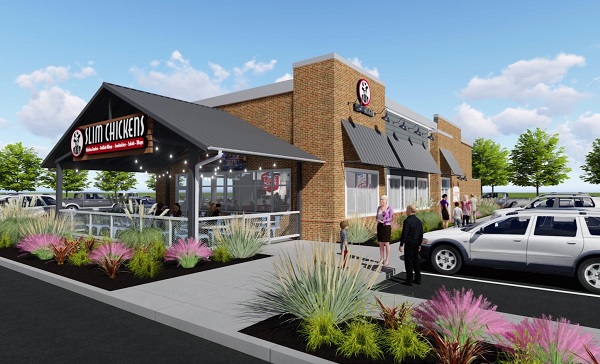 Slim Chickens is planning to nest in Colorado.

LOVE Restaurant Group plans to open the Arkansas-based fast food chain’s first location in the state at 3900 Tower Road in Aurora, according to representatives of the franchise group.

Kansas City-based Block & Company and The Zall Co. helped LOVE purchase the property this year, and said construction will begin soon on a 3,375-square-foot drive-thru restaurant. It is expected to open by year-end.

Zachary Albrecht, of the The Zall Co., said the restaurant group owns the franchise rights for all of Colorado, and hopes to open more locations in the state this year. He said LOVE is under contract to buy multiple other sites.

Slim Chickens opened its first restaurant in 2003 in Fayetteville, Arkansas, according to its website. The fried chicken joint now operates nearly 100 locations worldwide, including three in the United Kingdom and two in Kuwait.

The Memphis Business Journal reported last month that the chain also is planning a Tennessee expansion, with 10 to 15 Memphis-area locations in the works.

The first location will be in Aurora, and more Colorado locations are planned.

Libby, how can I get in touch with L.O.V.E. Restaurant Group. We have helped other Slim Chicken franchises with their management needs. We do restaurant management recruiting. Gecko Hospitality