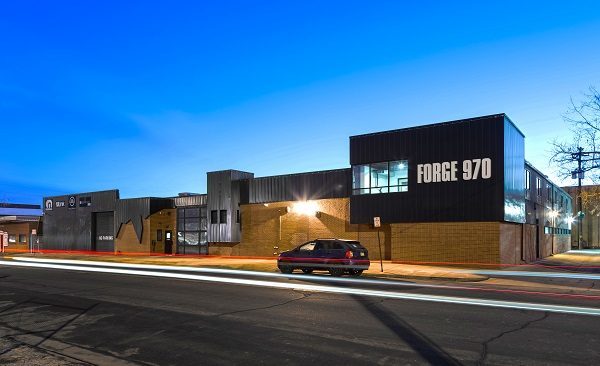 The founders of RiNo’s Industry are looking to unload another office building they own in Denver.

Jason Winkler and wife Ellen co-founded the shared office space brand Industry, which now has two locations in Denver. Forge970 is one of two non-Industry office projects the couple also developed in Denver. Jason Winkler told BusinessDen last year they sold their ownership stake in the other one, Battery621 at 621 Kalamath St.

Winkler did not return requests for comment on the decision to list Forge970 for sale. He purchased the building in 2015 for $2 million, according to county records. 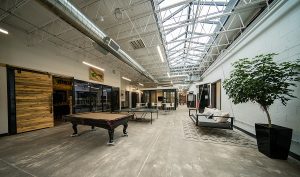 Forge970 is one of two non-Industry office projects the Winkler couple developed in Denver.

The two-story building, located near the intersection of 8th Avenue and I-25, used to be a Wells Fargo armory and has three vaults inside, according to listing broker Billy Woodward of Transwestern. The original vault doors now guard the entrance to conference rooms.

The building touts a handful of gritty, creative businesses, some of which utilize the space for light manufacturing. Current tenants include Meier Skis, Link Product Development, Tobe Outerwear and 4Corner Business Services.

“We would love to keep the tenancy intact because there’s definitely a community feel to it and the tenants enjoy each other,” Woodward said.

The Winklers appear to be focusing primarily on the Industry brand these days.

They’re working to expand the company to Salt Lake City by converting an old silver foundry into 150,000 square feet of shared office space, climbing gym, restaurants and housing. Additionally, Industry plans to open a location in Detroit in 2020 in a former school, according to the company’s website.

Woodward, who is listing the building with Transwestern colleague Whitney Hake, said some of the building’s common areas could get converted into more rentable office space. The building’s $5.5 million price is based on this additional rent revenue.

Jason and Ellen Winkler, who are working to bring Industry to Salt Lake City and Detroit, want $5.5 million for Forge970.