BLKDG specializes in custom and experiential marketing with a digital focus. (Screenshot)

Tennyson Street soon will be home to digital agency BLKDG.

The 5-year-old startup (pronounced “black dog”), which got its start in an Aspen apartment, plans to move next month into a 1,350-square-foot unit at 4383 Tennyson St.

The company purchased the space — a ground-floor retail unit in a four-story condo building — from Red Chair Realty on March 14 for $450,000, according to county records.

BLKDG co-founder Jonathan Georger said he was attracted to Tennyson Street for its variety of retail shops, restaurants and growth.

“I think it was an opportunity that does not come very often these days,” Georger said. “One of our goals early on was to diversify our business into owning an asset such as our own space.”

The space is nearly twice the size of BLKDG’s current location at 209 Kalamath St. in the Baker neighborhood.

“Currently, we are at nine employees and we’re planning to hire potentially two more in 2019,” Georger said.

BLKDG was founded in 2013 and moved to Denver from Aspen in 2014. The company delivers custom and experiential marketing for brands, specializing in digital, website and mobile work.

“I would say we’re actively working with over 50 brands,” Georger said. “Close to 80 percent of our clients are Colorado-based.” 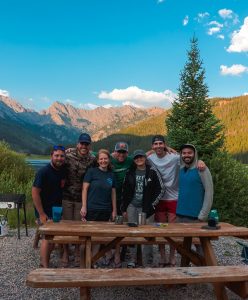 Georger stressed that the agency provides more than just website and mobile design for its clients. For example, BLKDG redesigned Oscar Blues Brewery’s website to include an interactive map for customers to find the closest location of any particular beer. And for the yogurt company Noosa, BLKDG developed a new email reward campaign for its customers, Georger said.

Georger declined to disclose the agency’s 2018 revenue, but said BLKDG funded its recent Tennyson Street purchase through an SBA loan.

BLKDG specializes in custom and experiential marketing with a digital focus. (Screenshot)

BLKDG co-founder: “One of our goals early on was to diversify our business into owning an asset such as our own space.”