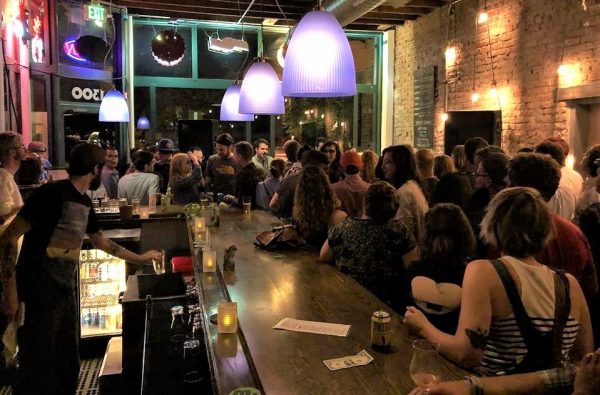 The bar at Uptown’s Denver Bicycle Cafe — a combination bike shop, bar and coffee shop— is set to relaunch with a new identity and a wider drink list.

The Uptown establishment, which has been known as DBC Beer Hall, will close this Sunday and reopen Friday as Tandem Bar. In addition to the beer and wine DBC previously offered, Tandem also will serve hard alcohol.

“We’ll stick with the classics — we’re not trying to do anything too complicated,” Tandem owner Jessica Caouette said. “We’ll have things like an Old Fashioned and palomas. As time goes on and we become more skilled, we’ll launch some more cocktails.”

Caouette said the move comes in the wake of a behind-the-scenes change in the business’ ownership structure.

Caouette and Peter Roper opened Denver Bicycle Cafe in 2011, and the business has been “bikes, beer and coffee from the beginning,” Caouette said. For years, the pair operated the cooperative business in one space at 1308 E. 17th Ave.

In 2015, the business took over the former art gallery located next door at 1300 E. 17th Ave. The move gave the café/bike shop the entire 4,300-square-foot building stretching west from 17th and Lafayette.

Caouette and Roper continued running the business together until this past November, when they decided amicably to split the business in half. Roper took control of the bike services and the coffee shop, while Caouette took over the beer hall. Both sides of the business still operate under the same LLC — The Bicyclist LLC — but now use separate trade names.

“I’ve always wanted to open my own bar someday,” Caouette said. “I’m really lucky that it’s worked out this way.”

After the split, Caouette applied for and received a tavern license, which would allow her to serve spirits in addition to beer and wine. Her plan is to create a neighborhood bar with a selection of cocktails featuring Colorado spirits. 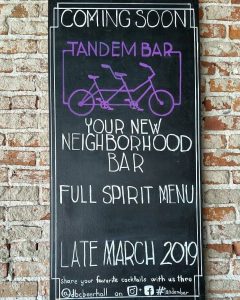 Tandem Bar is set to open later this month.

To source Tandem Bar’s spirits, Caouette is in talks with Golden Moon Distillery, The Heart Distillery and Leopold Bros. The bar will continue offering Colorado beers from breweries such as Odell and Renegade.

Caouette also is working on a partnership with Olive & Finch, which will supply grab-and-go sandwiches and salads, and will roll out Tandem Bar-exclusive products in April.

The 900-square-foot bar can hold about 50 people. While the name is changing, Caouette said the bar will continue to have live music on Friday nights, and host Geeks Who Drink trivia nights and open-mic comedy on Sundays.

The five-day break ahead of Friday’s opening will give Caouette time to give the space a face-lift, but the biggest difference will be a mural painted by Heath O’Campo.

“He did the logo design, and he’s helping me with the branding on the space,” Caouette said. “He’s got this amazing mural design to paint on the inside of the bar — it’s a super colorful scene of the mountains and the Denver skyline. We’re hoping to change the space from an industrial beer hall to a more colorful neighborhood bar.”

Tandem Bar will be open daily from 3 p.m. until 2 a.m., Caouette said. A grand opening party will be held Saturday, March 23.

The rebranding of the bar at Denver Bicycle Cafe follows a behind-the-scenes change in the business’ ownership structure.