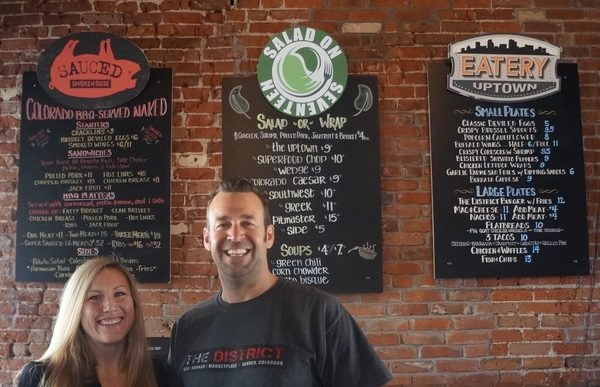 In the fall, Kerry Condon and Theresa Dolezal revamped the restaurant they own along 17th Avenue in Uptown, which opened in 2014 as The District.

The result was District Marketplace, a restaurant with a full bar and three menus to choose from.

Feedback has been positive. But Condon and Dolezal still are craving one big change, that feature that Denver residents have come to love.

That’s right. They want to add a rooftop patio.

“Denver has something like 300 days of sunshine a year,” Condon said. “Speaking for myself, when we get that sunny, 60-degree Friday afternoon, I’m going to be on a rooftop.”

In Condon and Dolezal’s eyes, the changes they’ve made — and the patio they want — are an attempt to buck the trend in a neighborhood that hasn’t kept up with them.

“Restaurant Row has been established for quite awhile, but it’s gotten a little bit lazy in terms of keeping up with what people want,” Condon said, using a nickname for the 17th Avenue corridor. “There’s an area of LoDo where there’s six-seven bars within a five-block area that all have rooftop patios.”

Rooftop patios, however, cost money. And that’s been the challenge for District Marketplace. 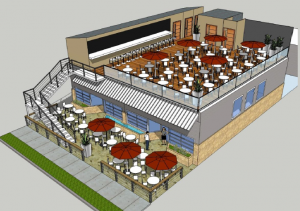 A rendering of the planned rooftop patio. (Courtesy District Marketplace)

“We’re ready in the city’s eyes to build this rooftop,” Condon said. “Now we’re actively looking for investors to help us get the project off the ground.”

“We’ve talked about partnering with somebody that wants to come in and invest,” Condon said. “Another thought was to put together a group or find a person who wants to buy the building, do the improvement and then be our landlord at a higher rate than what we’re paying now. The third thing we’ve been kicking around is potentially doing some kind of crowdsource funding.”

Dolezal said they’ve discussed adding the rooftop patio for two years, and regulars come in asking when it will be open. When the pair asked neighbors about the potential addition, they said they got an overwhelming “yes.”

Condon and Dolezal signed a five-year lease on their building at 1320 E. 17th Ave. in 2014, so it’s due to end next summer, Condon said. They’re looking into purchasing the building, but a lot depends on the rooftop.

Condon, who grew up in the neighborhood, said the young people in the area are starting to move to other neighborhoods that are being developed with more “progressive business models,” like RiNo and LoHi. So in October, he and Dolezal revamped their restaurant.

Each of the menus — Salad on Seventeen, Eatery Uptown and Sauced Smokehouse — has its own station in the kitchen, Condon said, and he and Dolezal developed each concept.

“The Salad on Seventeen menu is based on a soups-and-salad restaurant I started in 2005 called Boulder Greens,” Condon said. “Eatery Uptown is a culmination of the last four years of doing business here in the neighborhood and what people wanted when they came in. And we did Sauced Smokehouse because I’ve always been interested in smoked beefs and barbecues — I built my first smoker out of a keg when I was in college.” 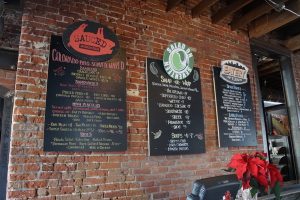 Condon and Dolezal said the goal is for the three-menu model to bring a more collective eatery vibe to the neighborhood, as well as provide more food options.

“There are so many professionals around here who don’t have an hour-plus to go sit down for lunch, but still want high-quality food,” Dolezal said. “We’re offering that quality food but served fast, and with a lot of choices.”

As for a 2,500-square-foot rooftop patio, Condon said he’s already designed it, and that construction would cost about $300,000, and take three to four months. The design includes a full bar, restrooms, seating and a service station.

The building is uniquely positioned for such an addition. According to Condon and Dolezal, many of the buildings in the area are on the city’s registry of historic buildings, but because their building was abandoned at the time the registries were being made, it was left off the list.

“We’ll be the only one in the neighborhood to have a restaurant with a rooftop patio,” Condon said. 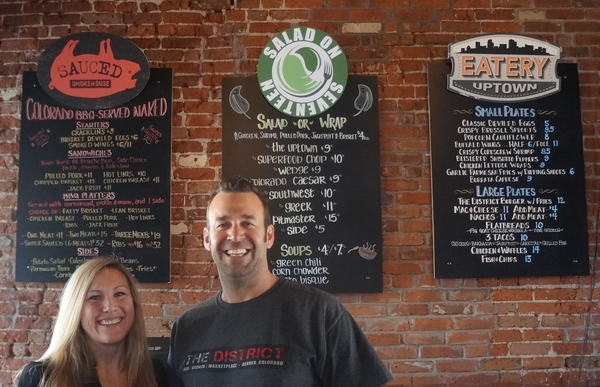 ‘Restaurant Row has been established for quite awhile, but it's gotten a little bit lazy in terms of keeping up with what people want,’ said Kerry Condon, co-owner of District Marketplace at 1320 E. 17th Ave.

Find a good architect/engineer and you will. be able to put a rooftop patio almost anywhere